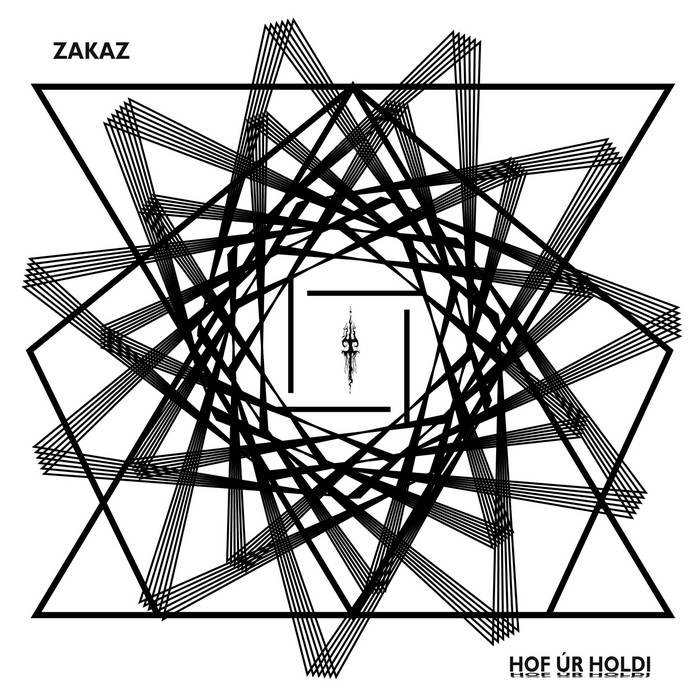 My first aquintance with Iceland’s Zakaz was when the one man black metal project released their EP ‘Unbroken’ in 2019, which left a good enough impression to make a mental note to keep an eye out for this one man act. In the end, this happened almost naturally when a short while ago, the full-length ‘Hof úr Holdi’ (Temple Out of Flesh) proverbly landed on my desk.

Recalling a darker, broodier atmosphere from the previously mentioned EP, “Inngangur” and “Upp úr minni þjálu sorg” kick off the record upbeat with folky guitar lines, to my initial surprise. Four of the songs of the EP also made it to the album, but these seem to be the more melancholic, darker tracks, for example “Eilífi drottinn holds”.

While listening to the record, one can very clearly hear the influence from the pagan / atmospheric black metal genre seeping through. The spoken vocal parts are for example a bit remniscient of Summoning, as well as the sometimes murky production. Overall, ‘Hof úr Holdi’ probably leans a bit too much onto riffs, melodies and vocal lines that are in excess in this genre. While listening to the opening riffs of “Unbroken We Stand”, there is a lingering feeling of ‘where have I heard this before’ (not meaning the same song on the EP).

Does this make ‘Hof úr Holdi’ a bad record? Absolutely not. It’s highly enjoyable to listen, the upbeat melodies are a nice change to all the doom and gloom of late and the clean vocals really give an extra epic dimension to the songs. Also, on tracks like “Forgotten Ancient Past” and “Shadows That You Cast”, Zakaz experiments with the song structures which is one of the things that keep your attention while listening to the entire album. There is definetly potential here which I hope will be explored on a next album.