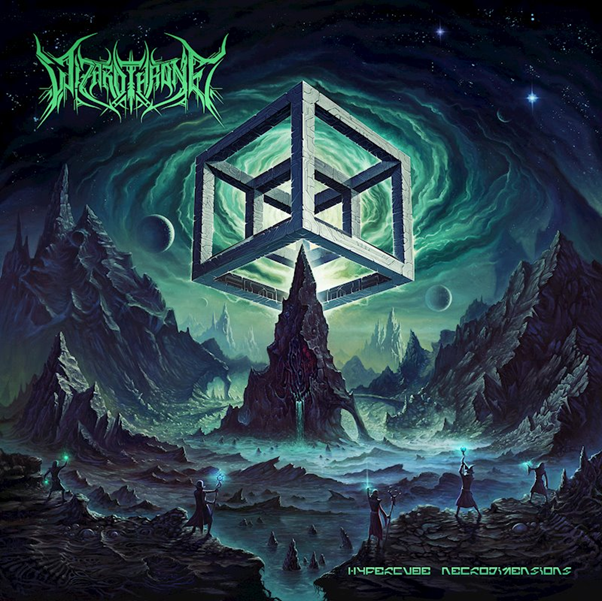 What would happen if you mashed together Alestorm, Aether Realm and Gloryhammer? Then threw it all into space? No one has ever asked that question before – well, until Wizardthrone anyway. Wizardthrone is a new international supergroup made up of several prominent members of aforementioned bands, most notably including Chris Bowes of Alestorm/Gloryhammer; and everyone knows if he’s involved there’s going to be a lot of chaotic energy.

With the insane names the band members are going with you can easily tell this is one of those projects that will walk the line between being a gimmick and a serious band. Very much like Gloryhammer does. Speaking of which, the influences of it are very noticeable in some songs, such as the spoken part in “Frozen Winds of Thyraxia” for a start. The guitar work on the album is overall very energetic, but I actually wish it’d slow down at times. For a lot of the album I just get a feeling that there’s too much happening all at once and with too little variety. As if it’s all just been thrown together a bit. Similarly the vocals, while completely fine technically, are a bit dull and lack diversity, different deliveries and maybe more emotion.

Nearly all of the songs actually seem to follow a very similar pattern – evil-sounding narration, which is then answered by growls from the vocalist and bassist V. Morbistopheles Jones, joined by a lot of keyboards and similar-sounding guitars and drums. Perhaps it’s all a bit more interesting if you care about the story that’s going on, but personally I really dislike these space-themed nerdy fantasies. The first song that actually for a moment broke the monotony is “The Coalescence of Nine Stars in the System Once Known as Markarian-231”, which does at least try to be a bit more catchy.

Devin Townsend once made an album about Ziltoid the Omniscient, an evil space conqueror, who thought he was brilliant on guitar, but he was absolutely horrible. It’s really unfair on the lads in the band, because all of them are actually great at their respective instruments, but this album – “Hypercube Necrodimensions” – really does remind me of him. The record finishes with a 13-minute piece with another one of those ridiculously long titles that no one will ever remember, which does thankfully have a bit of dramatic intro that then turns into the same fast-paced sound. Although there are a few seconds of cool operatic vocals at about four minutes in! To be fair, it is a technically great song, and probably the one I like the most.

I went into this debut album with quite high expectations as I do really like Gloryhammer – especially their last album. But everything in this Wizardthrone record feels too crowded for me and the sound doesn’t have time to develop. It’s almost being drowned by itself. However, there’s nothing bad I can actually say about the instrumentation, so I’m still quite confident that some people will really enjoy this album. Personally, I’ll give it another chance if/when they tour close by and hope I find it more interesting in a live setting.

Tracklist:
1. Black Hole Quantum Thermodynamics
2. Frozen Winds of Thyraxia
3. Incantation of the Red Order
4. Forbidden Equations Deep Within the Epimethean Wasteland
5. The Coalescence of Nine Stars in the System Once Known as Markarian-231
6. Of Tesseractual Gateways and the Grand Duplicity of Xhul
7. Hypercube Necrodimensions
8. Beyond the Wizardthrone (Cryptopharmalogical Revelations of the Riemann Zeta Function)