This review has been a long time coming, but not as long as Wintersun‘s Time I or the yet to be released Time II. Bad jokes aside, Finnish melodic metallers Wintersun have released The Forest Seasons on July 21st, instead of the anticipated record Time II. The band has managed to create a whole circus around it, including much debated sauna’s, a public dispute with Nuclear Blast and more. Read our interview with Wintersun about it here.

The story in a nutshell: mastermind Jari Mäenpää felt he couldn’t find the right/work with the equipment provided to finish Time II, so the band set up a crowdfunding campaign to fund the building of the Wintersun Headquarters, a massive studio with all the equipment an audiophile/musician/producer/mixer/master could ever dream off. That is what we think at least, because at this point the studio is as much a fantasy as Narnia. Read our interview about the crowdfunding campaign here.

Admittedly, the whole thing leaves a bit of sour taste behind but the main element here is the music. Wintersun’s self titled debut (2004) remains an absolute killer and Time I (2012) is just as majestic. So, what does The Forest Seasons offer us? The structure of the record is based on the four seasons and every track represent a season. The album opens with ‘Awaken From The Dark Slumber (Spring)’. A mid paced song, a tad cheesy in its sparkling symphonies but typically Wintersun and together with ‘Loneliness (Winter)’ the best thing you’ll hear on The Forest Seasons. Mainly the second half of the track reminds you of early Ensiferum with Jari and previous Wintersun material and this part that sticks with you. It would have been nice to hear a bit more technical guitar work here and there, a key element that is actually missing on the entire record. Odd, since these are the skills that Jari is so much admired for. 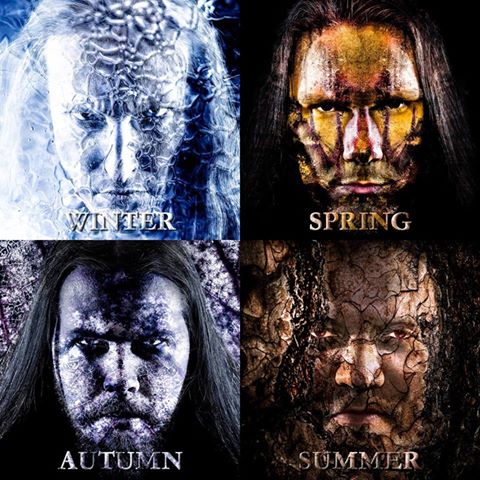 ‘The Forest That Weeps (Summer)‘, based on Scandinavian summers, is not so cheerful as one might expect. The pace and the male choir give it a dragging atmosphere, as a heavy rain shower on a warm summers day. A couple of elements keep resurfacing throughout the song, which make it seems less diverse (but if you listen closely, that is not the case) and whilst it is an epic song, nothing catches on. You can play it over and over again, just to find out that you forgot how it goes. Also, the last couple of minutes could have easily been taken from a Summoning album, making it feel entirely out of place.

‘Eternal Darkness (Autumn)‘, is in my opinion the weakest Wintersun song out there. The track contains minutes of monotone blastbeats and Dimmu Borgir-esque vocal lines. Nothing against blastbeats or harsh vocals (au contraire), yet they are stressed way too much. I’d be surprised if you manage to get to the end of Autumn through this thick, tedious wall of sound.

‘Loneliness (Winter)’, is drenched in melancholia and pain. The symphonies in this power ballad like tune let you imagine the snow drizzling around you and simultaneously see the beauty of a cold, frostbitten world. The mood never clears, the vocals remain tortured, the pace does not change into a snow storm: Jari shows is coldest side here. Winter has come and it is beautiful, bleak and fearsome.

The Forest Seasons contains various of good moments, but in the end it lacks the variety and the more creative, awe-inspiring song writing of its predecessors. Yours truly will stick with the first two records for now and will wait for Time II. Or more likely, wait for the next controversial news surrounding Wintersun.