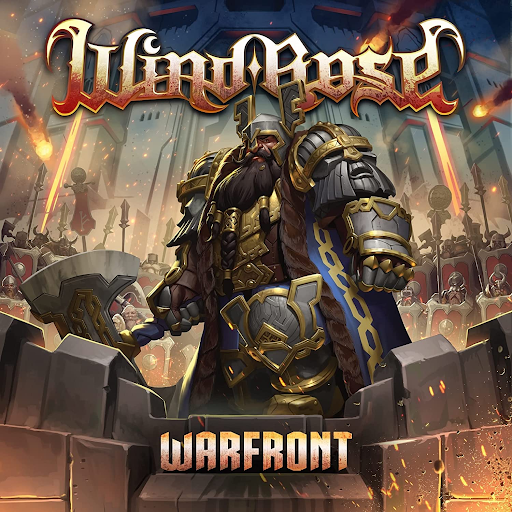 Is there anyone who hasn’t fantasized about being a powerful dwarf lord sitting on a throne of riches in the wake of heroic conquest? Italian five-piece power metal band Wind Rose clearly have, and they have been doing us all the favor of providing a compelling soundtrack to our Dungeons & Dragons campaigns since 2012, when they released their first complete studio album: “Shadows Over Lothadruin.” Apparently it was more than sufficiently fantastical, because the band shortly after toured with the immensely popular bands Epica, Wintersun, and Finntroll. Since then, Wind Rose have produced a handful of singles and four complete albums, the latest of which is set to be released on the 10th of June this year.

The album, “Warfront,” continues the band’s Tolkienian themes, and should be a delight to anyone who enjoys dramatic video game music. It’s apparently inspired by Warhammer imagery, and Francesco Cavalieri’s vocals sound exactly what I would expect from your Friendly Resident Dwarf Lord™.  Mind you, those vocals took a couple tracks to grow on me, but I suppose a full dwarven beard doesn’t just appear instantaneously either.

This new set of battle hymns definitely reminds me of video game music: There’s a lot of minimalist harmonic repetition and repetitive looping, which brings up memories of watching the “loading” sign in Dragon Age: Origins. Unlike the growing impatience in anticipation of casting my next Sleep -> Horror spell chain, however, “Warfront” avoids feeling overly repetitive: Wind Rose picks up the momentum of each song and hauls it across the river of monotony by including a great deal of rhythmic troping – that is, by introducing different variations on a rhythmic idea.  Incidentally, the harmonic repetitive looping found in video game music –  and video game adjacent music like “Warfront” – can be considered a type of strophic form, which is a technique that has been around since the Baroque era with Bach and Handel!

“Warfront” opens with an instrumental track that introduces some of the harmonic tropes that they vamp on a variation of in its follow-up, and the aesthetics of each individual track complement each other nicely when listened to in order. They don’t seem to be branching out or trying much that’s new or out of the box, but I guess if it ain’t broke, don’t fix it; their army of axe-weilding Mithril-miners – er, fans – seem to love their work so far, and my guess is this album will be met with a feast and toast of ale of similar enthusiasm!

My biggest criticism of the album is that it leaves a lot of obviously-synthesized symphonic pieces out in the open, where they sound blatantly like someone’s using the “cello” feature (or whatever instrument) on an electric piano. Not that I’m criticizing using an electric piano for backup, of course, but I would have preferred that fact to be a little better covered up in the mix.

Overall, Warfront carries the axe with elegance and drive, and I’m definitely going to try to listen to it en route to the next Rennaissance faire!