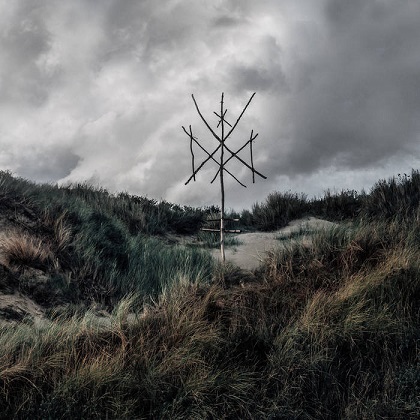 By Wouter
It is clear from the popularity that Belgian Wiegedood seems to receive from all over the of black metal multiverse that an infant death syndrome is not to be their fate, although the name suggests otherwise. The 10th of February 2017 the follow-up of De Doden Hebben het Goed will be unleashed upon the world. So why change a winning team or name?

Indeed, Belgium is fast on becoming a country of influence with quality metal acts. Whether it is progressive/black Saille, fast-and-loud Evil Invaders or plain-good thrash Bliksem: most of it stands out for their musicianship, talent and correct delivery. Wiegedood is no different. With their second release, a true-to-it’s-name follow up aptly if not very creatively called ‘De Doden Hebben het Goed II’ they continue their trek of technical, bass-guitar-less atmospheric (post)-black metal. Don’t change the good name you made for oneself – taken literally.

Like on their debut release (read review here , the guys (that formed Wiegedood more or less as a side project in 2014/2015 next to their bands Amenra, Hessian and Oathbreaker) didn’t compromise on quality on De Doden Hebben het Goed II.

Since then I have been privileged to see them live as well, to which I can only say: wow. A massive wall of music produced by just three people, while maintaining the dreary yet dreamy atmosphere that is characteristic for their sound.

Opening track ‘Ontzieling’ (for lack of a better term: de-soulification) is one for the stragglers and those left behind in the wake of the storm unleashed by their debut (De Doden Hebben het Goed). A well composed, at times laid-back and almost swinging load of atmospheric, melodic and aggressive post-black metal, done in minimalistic setting. Despite this latter, Wiegedood doesn’t come across as lacking or missing. If anything, the music seems to overwhelm everything else, like lyrics, story or content. This latter I find very pleasing, as only a few bands manage to also enthuse me lyric wise.

Through most of DDHhG-II, Wiegedood stays in the realm of fast, pounding drums and riffing. This gives their sound an aggressive layer, floating on top of the subdued, atmospheric foundation of the album. (this latter is best heard on Cataract, perhaps my favorite, although competing heavily with Ontzieling).

A bit more experimental and subdued are the chanted/hummed vocals on the 3rd (title) track, delivering a clinging desperation and some traces of misanthropy (although the latter is my own interpretation). The ending part, a bath of noise, is brutally transitioned as the album closer, ‘Smeekbede’ (supplication) kicks in. I find the initial part of the song a bit of a hit-and-miss at the same time: the fast pounding sections are brutally brilliant, yet the mid-tempo sound a bit staccato forced to me. This picks up mercilessly at the end, with a release of accumulated aggression punctuated by scream to leave your ears bleeding.

The album is quite short, with just 4 songs having a total play length of 33 minutes. Although this is in line with their earlier work, I would have liked a slightly longer one after the success of the debut. A great piece of (continued) work, I am ready to see the live performance of Wiegedood of ‘De Doden Hebben het Goed’ – round 2!