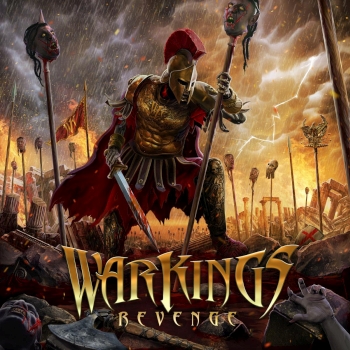 Side projects. A lot of times band members like to exploit different genres or influences and venture off to different bands. That’s how special projects are born and about two years ago we were surprised by a band named Warkings. Behind a cloak of secrecy, this band plays power metal best described as a mix of Serenity, Sabaton and Gamma Ray.

We mention Serenity for a reason, because right from the start it was quite obvious that the main singer of Warkings is Georg Neuhauser of said band. Well, maybe it’s not as great a secret as it’s supposed to be, as Georg shares Warkings videos on his personal page as well, mentioning his “twin brother”.
“Revenge’s” theme doesn’t stray far from it’s predecessor “Reborn”. Neither do the songs, to be fair. It’s all pretty straightforward, with powerful drums, heavy riffs, melodic singing and no keys. Instead of mainly staying in and around the Roman Empire, we relive multiple battles in Scotland, still the Roman Empire and other areas of the world. The diversity we see in themes, we lack a little bit on the record though.

I mean, that doesn’t have to be a bad thing. Most songs on “Revenge” still have a catchy melody, good riffs and straightforward singing. Sometimes we feel a little bit of rawness and edge in Georges singing, but I think this record could have gotten better with more passion and “acting”. When you sing about being warriors, you do that with fierceness and passion, I reckon.

More diversity in the songs starts from “Odin’s Sons” where we can hear grunts from “The Queen of the Damned”, who is Melissa Bonny of Rage of Light. After this heavy track, the pace is slowed down a lot in “Banners High”, which feels like a “come on, wave your hands” song, if you know what I mean. “Warking”” gives me a little bit of a Manowar vibe, at least the chorus does. “Sparta” is a decent ending of the record. One thing that bothers me though, is that at around two minutes in, the songs goes into some kind of “woo ooo ooo” bit with a crowd chanting and whistling as if we are at a concert. This just feels off and unnecessary.

All in all, “Revenge” is a decent second album by this mystery band. The songs could do with some more variety as well as a bit more passion in Georges singing. Bringing in a guest artist was a smart move, so maybe that will work again next time as well.