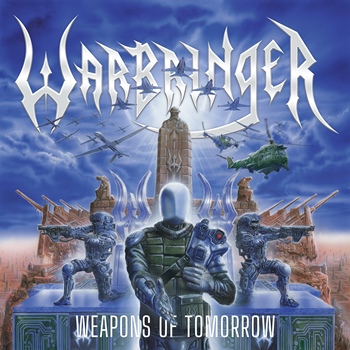 When listening to heavy music in today’s age there are so many genres that have been blended together to get the sound of today’s modern metal bands. However, there is always one genre that seems to stick out in most bands compilations, and that is Thrash. One of the forefather genres of heavy music thrash has been a part of metal for decades and still continues strong with a release like “Weapons of Tomorrow“ by Warbringer.

Forming in 2004, Warbringer was a hit from the word go and has gone on to become one of the 21st centuries thrash titans. Weapons of tomorrow leaves no shortage of their melodic up tempo pounding style, and if you like leads look no further because this album is FULL OF THEM. The opening track titled “Firepower Kills” is just that, musical firepower. Trem picking and thrash beats pound through the speakers and at 1:58 we’re into our first searing lead. My personal favorite part of this track though is at the 2:37 mark where it opens up into another colossal 80’s style dive-bomb lead followed by fret peeling shredding and killer melodies.

Next we find ourselves in my favorite track of the album Defiance of Fate. Opening with a Metallica Sanitarium esque intro, this song is probably the most diverse of all the songs on the album, especially being over 7 minutes long. I think that’s why I like it so much. It has more of a slower crushing groove to it while still maintaining their melodies. At 4:15 it picks up and gives listeners that head banging groove and a very simple yet perfect melody lead.

With more leads than your ears will know what to do with weapons of tomorrow delivers exactly what thrash and metal fans want, however blending perfect groove and melody throughout the album is where Warbringer stands out from the rest. Personally for me sometimes thrash can be hard to listen to as it gets very monotonous, one sounding. Warbringer has far outdone themselves on this album bringing a perfect complement to each track forming a crushing musical journey to the end of the album.

“A fresh energetic take on a tried and true speed metal formula, Politically driven lyrics that fit well with the overall theme” This was just one thing mentioned when my friends and I were discussing Weapons of Tomorrow and I think this statement hits the nail right on the head. Another thing I think is underappreciated with this album is the cover artwork. Not only does the sound hail from the 80’s but so does the artwork. I absolutely love the 80/90’s style G.I. Joe sci-fi military image. It ties the album together perfectly.