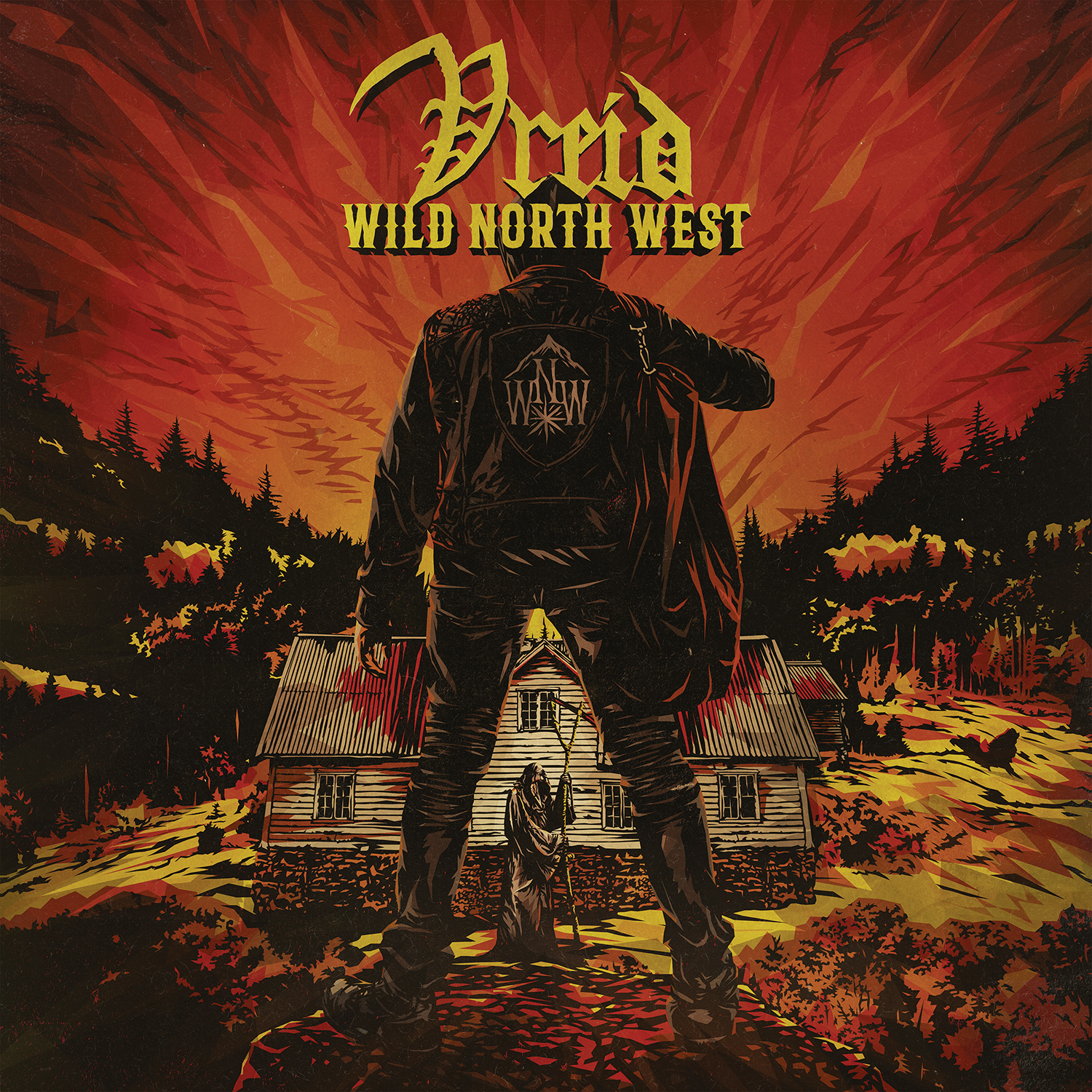 With the world being a crazy place at the moment, somehow it feel barely two years ago since Vreid brought out their previous album Lifehunger. It took quite a while before I started to appreciate that one. Being a big Windir fan, I always had (maybe have) some difficulties accepting that Vreid is not just Windir 2.0 but a unique band itself that is evolving.

Now they’ve released Wild North West. The first time I heard the entire album, was during the preview of the film they made with the album and I had some difficulties ‘getting it’, but that’s probably because I was too focussed on, and confused about the film, and not so much paying attention to the music.

Listening to Wild North West a couple of times without the film works better for me. What stands out mostly is that this is by far a much darker album than the ones they’ve made so far. No surprise when the main theme is ‘Death’ itself. Inspired by various situations in their private lives, their band life and (Norwegian) history, Vreid takes us home to their mystical Wild North West country.
With Wild North West, their typical Black ‘n Roll gets a little blacker and more experimental than before. The spooky opening tunes from title track Wild North West remind me of a black and white horror movie, but it doesn’t take long before Vreid their typical Black ‘n Roll sets in and we’re on familiar ground. The first side track, that this crazy train takes, is The Morning Red. This slow paced, doom track is nothing like we’ve heard from Vreid before. It’s sinister, slow and dark, but with a tension building up. For me, the best way to describe it is ‘very Norwegian’.

After this nice experiment, Vreid presents us with what best can be described as ‘a summary of Vreid’. Shadows of Aurora has about every aspect that we’ve heard from them since their beginning, with obviously in the main role: Black ‘n Roll. It’s impossible to sit still during this up tempo song that’s far from anything renewing, but a nice ‘light’ and catchy song on this dark album.
I’m not so sure what to think of Dazed and Reduced. The music lines are pretty easy going, and simple, more focussed on the Roll than on the Black… the vocals however, I don’t know. The total of it doesn’t match each other, nor the album, and leaves me confused instead of reduced.

My heart jumps a little when Into The Mountains starts. This song contains old recordings of Valfar and the basics of it were written back in the Windir days. Considering the theme of this album, this is a nice tribute to Valfar and Windir. The guitars during the first half scream ‘Windir’, and take you back to the days. Halfway the song a switch is made, the old Windir sound is gone and the last tribute is made.

Though the theme and concept of Wild North West is a binding factor, the songs themselves go all over the place. The basic Black ‘n Roll still forms Vreid their characteristic sound, but the experimental parts go all the way, some for the better, some for the worse. This doesn’t mean that the more experimental songs are bad, because I tend to like most of them. However this being a concept album, it’s hard to see the entire album as one unit; but it feels more like a collection of songs.
Overall it’s not a bad album but it could have made more sense. I recommend you listening to it; with ánd without the movie.

Tracklist:
1. Wild North West
2. Wolves at Sea
3. The Morning Red
4. Shadows of Aurora
5. Spikes of God
6. Dazed and Reduced
7. Into the Mountains
8. Shadowland