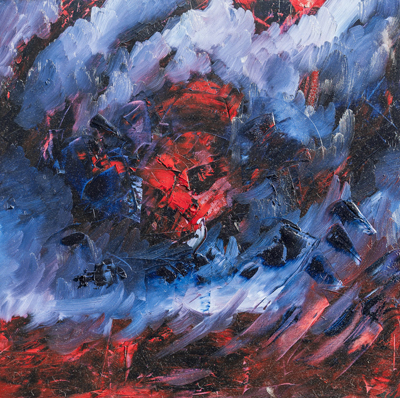 Science or Art, Nature or society: in the end it will all decay and burn. So bring your guitar and let’s get poetic, while we are at it.

Verval (Decay) is a Dutch atmospheric black metal project by W. Damiaen and R. Schmidt, having recently released their studio album Wederkeer (Return, Reversion). W. is perhaps better known for his work in Laster, Willoos and White Oak. The latter was disbanded in 2014, although W and R. both decided to continue that line of atmospheric black metal in Verval of which Wederkeer is the first result.

Uit de As Verrezen (Risen from the Ashes) starts off with an impressive cello intro, contra-pointed with an acoustic guitar that doubles up. The heavy tone set here is the foundation on which any melody or cheer may build through-out the album. A plodding, heavy and slow paced piece follows, that eventually evolves into a somewhat lighter composition. The song clocks just shy of 14 minutes, which is long but very fitting for the impressive composition and evolution the work offers.

The album is made up of three songs in total, each with a play time between 13 and 15 minutes, making Wederkeer an immersive experience to listen to. The music is a fantastic composition of heavy, dark and leaden elements, setting a gloomy atmosphere. But the guitar work and (almost constant) melody and varied riffing on top make it, besides immersive, an album that deserves more than just a first glance listen.

The atmosphere and setting is of the album is perhaps best defined (besides the brilliant intro as mentioned) in the instrumental intermezzo around the 7min mark of Vervreemding (Alienation) and its subsequent transition back into the music. Calm, beauty and simplicity transcending, quite literally, into chaos, followed by order into omnipresent alienation. This I would say is the reflection of the theme of the album: the futile and ultimately destructive “research that aims towards understanding the fabric of Nature, or by creating works of art that strive to imitate Nature’s inherent beauty”.

The lyrics (all Dutch) are poetic and of a linguistical quality not often seen (although metal music lends itself perfectly for just that). This is highly appreciated, given some of the piss poor poetics and language of some of the lyrics around. To see it in Dutch also made me remember our language isn’t too bad on a bit of fatalistic expression (lyrical excerpt taken from Vervreemding):

Well, one thing I can’t be fully positive about on this album are the vocals. As with Lasters’ Ons Vrije Fatum, they are something I can’t really get used to. They seem constricted, subdued and sometimes ill-fitting to the music (although hard to put a finger on exactly). Granted, as it’s a recurring personal thing, this should be taken solely as a testament of my own taste limits. So by all means go listen and find out for yourself.

The production of Wederkeer has a good dynamic, especially for black metal, but it is definitely not sparkling or and by no menas brushed. That latter is generally a good thing, as it does credit to the theme. Personally, I still think music and the atmosphere is better served with a clearer, less subdued mix, to let the individual instruments speak.

With Wederkeer, Verval has released a real gem that is musically a more intriguing, definetly interesting and evolved continuation of the material put forth by White Oak.