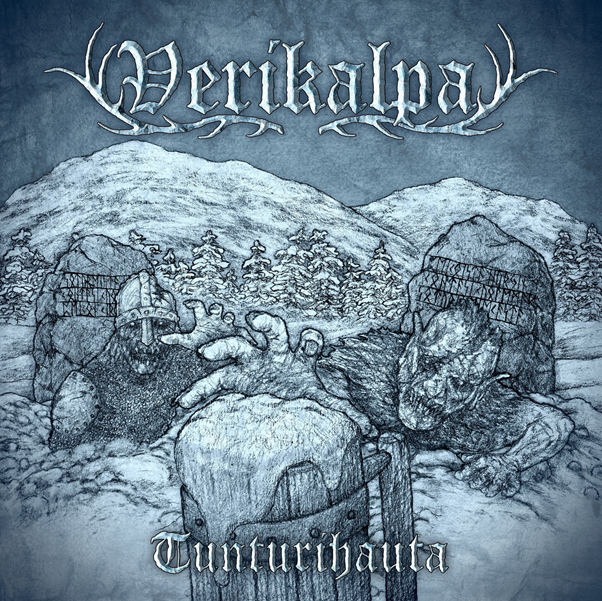 I’m sure you’ve all heard tales of Finnish bands getting lost in the never-ending wintery forests of Finland. It is said some try to find a way out for days until eventually succumbing to the cold. I’ve made all of that up based on a meme, of course, but if it was true Verikalpa is the band that wouldn’t have gotten out of the woods, but would instead make themselves at home right between those frozen conifers, with snow up to their knees.

Despite their first release only coming out in 2018 the Finns have managed to quite quickly make a bit of a name for themselves and are by now a fairly familiar name to most folk metal fans. “Tunturihauta” continues in a similar vein to “Tuoppitanssi,” which is to say they play a type of blackened, drunken and trollish Finnish folk metal. I do really appreciate that once again all the lyrics are in Finnish, which does make them sound more genuine in their storytelling, even if I do only understand about two-and-a-half words of the entire album

As if an onslaught of drunken trolls from the aforementioned forest, the band hits you with their sound, consisting of really solid growls, which are – as is the notion in modern metal releases – quite understandable. Well, if you speak Finnish that is. Furthermore, the band has very consistently good guitars and drums throughout that don’t let up, but what really brings it together is the keyboards. The first highlight of the album presents itself in the third released single, “Riitti,” which is just a classic Verikalpa song, full of energy, with a bit of a hint of some nefariousness around it.

After it the album really takes off with “Raivokansa” with its fast tempo and drumming rhythms, while the furious vocals are at the forefront and it’s very hard not to move along to this song – not that that’s a goal you should have. That same feeling reaches its peak with “Rautanen herra,” a song which seems to be about drinking some unholy concoction and hallucinating wildly in the Finnish forests judging from the video – something I’m sure will remind most Finns of “that one night last summer.”

There’s a dash more of melancholy with the titular track “Tunturihauta,” but far from it detracting from the fun and high-energy of this record. Verikalpa increasingly gives off the feeling of a sort of all-star band that combines elements of several well-known Finnish folk metal bands; there’s the blackened element similar to Finntroll, the thematics that could be likened to Korpiklaani and you wouldn’t be very wrong if you thought you heard some Ensiferum somewhere in there as well.

“Taisto” takes us into the latter third of the album, and it’s a track in which the keyboards control the rhythm very well, making it one of those songs that you’ll naturally headbang to. The folky parts stay prominent in the beginning of “Hurmos” as well. I do wish I had some lyrics to go with all of this and thus expand on these songs, which I’m sure have some really interesting stories, presumably involving Finnish mythology.

There’s an interesting doomy feel to the album’s last song, “Talven varjot,” which brings a bit of suspense with it as it develops slowly. A rather impressive, nearly ten second scream gets it going properly, but the song continues being less folky than the rest of the record and has a more serious feel to it. The drums and the guitars carry the song – which is at nearly six minutes actually the longest on the album – forward really well before it closes the third Verikalpa chapter.

I was slightly concerned about the Finnish sextet perhaps getting into a bit of rut and not exploring their sound enough with this release, but after listening more thoroughly I find “Tunturihauta” to be a really solid album. While the overall feeling is similar to the previous record, there’s enough identity to individual songs to make them memorable, and most of all extremely entertaining, which is something that’s turning Verikalpa into one of those bands that I want to see live the most.