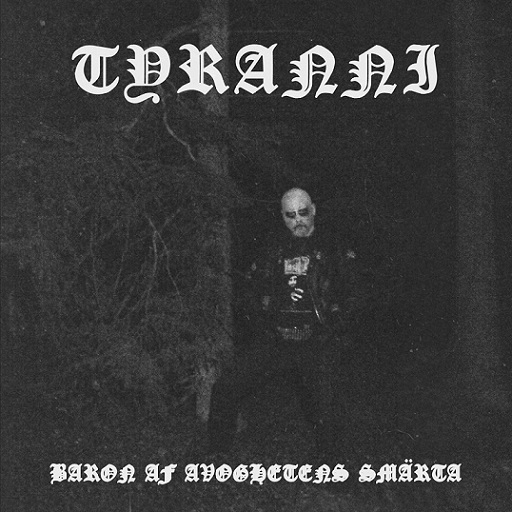 The Swedish act Tyranni managed to take my poisoned black heart by storm. After just releasing a demo a short while ago this band delivers its first full strike with “Baron af avoghetens smärta” which means something like ‘Baron of pain and vanity’. It contains the three tracks released on the demo and six new(er) tracks.

With this record it seems like time stood still since the middle of the nineties. With icy riffs, splendid spoken and screamed vocals, pounding drums and fitting keyboard tapestries the sound Tyranni produces brings the atmosphere all back to the golden, or should I say pitch black ;), days of the second wave of Black Metal. I really like the fact that the keyboards are well recognizable but do not distract from the rest of the instruments. It just adds an extra chilling dimension giving it an eerie, haunting and gloomy atmosphere.

This album has quite a long duration, but it doesn’t get boring at all. Fifty five minutes of orthodox Black Metal is being presented here, varying from mid-tempo to faster aggressive outbursts such as the excellent song “Smutsets Vålnad”.
Starting with a fitting interlude in the form of “Bespottande Åkommor” it really commences with “I Besvärjelsens Namn” which is a great, relative fast, track where guitars and keyboards are excellently combined.
After “Avoghetens Baron” which, just like “Dödens Hand”, acts as an intro “Förbannelsens Snara”, bursts loose in mid-tempo splendor presenting that ice cold atmosphere the way only Scandinavian acts can.
The almost fifteen minutes during track “Kittel Af Tyranni” is simply brilliant. The atmosphere and tempo shifts makes this song a thrilling ride from beginning to the end. Although it is quite a long album the ride is over before you know it. After listening it numerous times this dark piece of work keeps being interesting, especially in the night time.

New Era Productions has made a good choice offering this act a record deal. If you are a fan of Scandinavian (Black) Metal acts this is one not to be missed. It makes me a little nostalgic wanting to play albums from the good old days. But besides nostalgia Tyranni has more than enough quality itself and delivers some great piece of art. With a solid but not to polished production from Afgrundsmysticism studios the mayhem is complete. I can only conclude that listening to this album is sheer pleasure. A well performed underground record. So blackies, you can buy this album blindly. It will not disappoint. Great stuff.