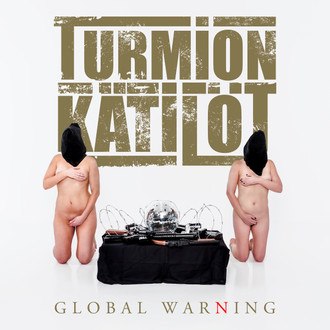 When playing the band Turmion Kätilöt, which means Midwives of Destruction if I’m correct, on my digital media player at first I thought I had a Finnish black metal act making its debut out of my speakers. I was 50% right because Turmion Kätilöt is indeed hailing from the beautiful country of Finland. But musically “Global Warning” has nothing to do with black metal. It is industrial metal pumping in Turmion Kätilöt’s veins.

With industrial metal I mean a mixture of Rammstein, Deathstars, Kovenant (Norway) and even a pinch of Slipknot. Not very original but this does not hinder since this band is very good in one thing: making really energetic and enjoyable songs. Already active since ’03, I have seemed to miss quite a lot of albums from this band. But “Global Warning” makes me curious what their discography has to offer.

After a short intro opener “Naihu” pounds in your face with powerful riffs, cheesy keyboards and synths together with screaming vocals. Follow up “Kyntövuohi” and “Sylkekää siihen” are in the same vein. The strong fact is that these songs are oozing with energy. It is very hard to keep your body from having spasmic attacks. In my case these attacks mean dancing.
The slightly slower and more melancholilc “Viha ja rakkaus” and “Syntisten laulu” are flirting with female vocals making this together with “Revi minut auki” which has some really cool keyboards one of my favourite tracks on this album.

I am not going to address all single songs on this album. It makes no sense because the style and manner in which the songs are presented should be clear. Although I am not the biggest fan of the genre I really enjoyed “Global Warning”. If there should be a remark it is the fact that everything is sung in Finnish language. But besides this remark the album is just pure fun to listen to. I think Nuclear Blast made a wise decision signing this band. If they get enough airplay and have the chance to conquer some venues in Europe; Turmion Kätilöt could really be big. It seems this band always has had a reputation of being a great live band. The combination of disco beats from the 90’s, raging metal riffs, sing-a-long vocals and a pinch of darkness makes this is a very welcome act. Perhaps a tour with one of the bands mentioned above? Let’s wait and see what the future has planned for this act. If they have the same energy on stage as on record they certainly deserve some (Metal) Exposure.