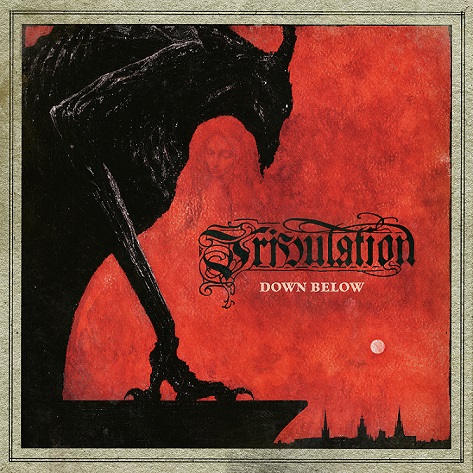 Tribulation have been around since 2004, and as such, managed to shapeshift themselves in almost every major release they ever put out there. What started out as a purely Death Metal band from Sweden that’s being swallowed in the gigantic pool of names of their own genre, has slowly transformed itself into a well oiled, aggressive and boundary-check driven machine that halts for nothing and no one.

If I’m being completely honest here, I think that Tribulation are one of those bands that mange to pique my interest, even though they haven’t been around for that long. 2018 brings a new release from the Swedes, entitled Down Below, and I can already pretty much summarize the whole review by telling you to go and get it.

Not only that is one of the best albums that I’ve heard lately, we’re only at the beginning of 2018 and it has already situated itself as one of my contesters for this year’s best album. Yes, it’s that well-made.

The new albums kicks off with “The Lament” and in a very familiar way, Tribulation brings forth genius grade chaotic twin guitar work, mixed with some melodies thrown in the middle. The melody-driven buildup continues until it dives right into a rock-esque foundation that blows new winds in the band’s sails.

It is safe to say that Down Below is clad in darkness, which is sometimes so dark you can barely see anything, and such is the feeling of the album throughout. Perfect example of that is “Nightbound”, whereas spiraling riffs that were dragged from the 70s, were beaten into place in the smartest way possible, thus managing to create a dreary, almost gothic level of atmosphere.

Tribulation almost always managed to mix and match anything that suits them, even if it means that some tracks are vastly different than others, on the same album. That way, “Lady Death” and “Subterranea” differ from one another, to the point that the listener’s ear is constantly having a variation in the information that finds it’s way to it.

As for each member’s level of musicianship, I believe it needs no introduction, as the drumming is perfect, the guitar and bass works that are making up the spine of the whole album are as embossed as possible, and the stone cold vocals that cover the whole package aren’t very versatile, but no one expected those to be too different.

A short break by the name of “Purgatorio” isn’t truly a break, as the 3-something minutes of acoustic work, accompanied by melancholic keyboard work, doesn’t actually feel like a break. It does feel like a scene right out of a horror movie, set in the 18th century. If you ask me, personally, it is magnificent. I usually hate tracks such as these because I tend to see those as fillers, but this one just sets the stage, for the almighty “Cries From The Underworld”, a track that I can honestly claim to be one of the band’s best.

The band continues to walk the fine line between their older sound, and the expandable world of tunes they are exploring, as is the case with “Lacrimosa”, that leans a bit more on Tribulation of the first album, with added monestary and religious choir effects, that add a bit more to the well-organized mess of layers in the album.

A bigger wink to the whole resurrection of occult rock, that Tribulation has always dabbled in, would be “The World”. The background keys are just on point, the atmospheric, light-feel riffs, and distant vocals tend to feel a bit too light at certain points, but these are minor moments.

If I’ll need to summarize Tribulation’s new effort, it would be to describe it as a personal junction that the band carefully treads through. It is the junction between the traditional Tribulation chaotic sound that everyone knows and likes, and the more melodic, even kind of groovy sound, that would perhaps appeal to newer audiences and at the same time, distance other, perhaps more closed-minded fans.