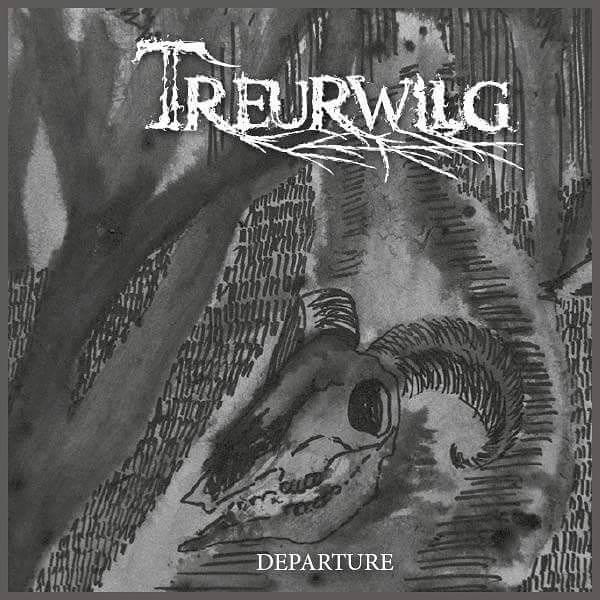 By Sam
I think the zeitgeist is starting to get to me. Ever since I first began listening to metal, doom has been a genre I’ve avoided – not because I dislike the music, per se, but because I’m already such a lethargic person that the mere thought of sludgy, down-tempo riffs and hyper-distorted guitars puts me into an absolute torpor. And yet, for the last few months, I’ve found myself increasingly attracted to exactly this sound. The Wikipedia article on the subject of doom metal describes it as a genre in which “both the music and the lyrics intend to evoke a sense of despair, dread, and impending doom.” I’d say the creeping need for doom metal in my life started sometime around November 9th of last year, so that description sounds pretty apt to me.

Luckily, “Departure,” the debut album from Dutch doom metallers Treurwilg, crossed my desk at around the same time. I was hooked right from the first riff of “The Inflammation of Our Blood” – there is so much melody to counterbalance the slow tempo and heavy distortion that this particular brand of doom metal didn’t make me feel the least bit sleepy; on the contrary, it was like an immediate energy boost. The rest of the album is equally invigorating, and the five tracks are all catchy as hell. Of course, there’s the odd moment that might feel a bit plodding to the average non-doom fan like me – the early minutes of “As His Final Light Is Fading,” for instance, or about halfway through “The Vacant Void” – but Treurwilg always rewards you for your patience. Those slower passages build up to an explosion of riffs underscored by thundering bass and drums, all lent an irresistible gravity by the fierce, resonant growls of vocalist Rens van Herpt. It’s heavy, it’s melancholy, and it’s powerfully addictive. I’ve been listening to the album on and off for a few months now, and the songs have stuck in my head that whole time – I just kept coming back to it, even when I didn’t intend to.

The first band that leapt to mind during my initial playthrough of this album was, weirdly, Enslaved – probably because I lack the proper doom metal context to come up with a better comparison, but I do think there’s a similarity to the way these two bands layer melody and distortion. I absolutely mean this as a compliment, and if I’m being honest, I think I actually prefer Treurwilg’s style of vocals. It’s hard to wrap my head around the fact that “Departure” is this band’s first album. I can’t really say whether Treurwilg is breaking new ground with this work or not, but if you’re like me – generally into faster-paced, melodic metal, but feeling a general sense of doom and gloom lately – “Departure” may well be a gateway drug for you, too.

Now, if you’ll excuse me, I’m off to listen to some Ahab.