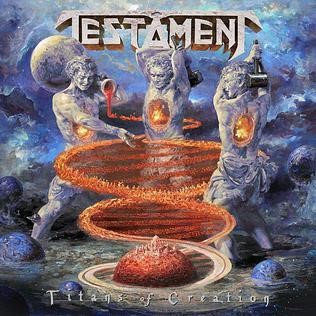 One of the greatest things about music, is it ability to take us back to a different time and place, sometimes triggering some rather nostalgic emotions. I was first introduced to Testament when I was around the age of 11 or twelve years old. After listening to bands like Black Sabbath, I found Testament to be a bit more intense and, in some cases, darker and this was very intriguing to me. After spending quite a few years dabbling in the more extreme metal subgenres, listening to Titans of Creation was refreshing and quite nostalgic to me.

Released April 3rd on Nuclear Blast Records, Titans of Creation, is a highly anticipated release by U.S. thrash metal masters, Testament. Testaments previous release, The Brotherhood of the Snake, surpassed many of our expectations and surely crushed any questions as to if the band could produce quality and current material while still maintaining that classic Testament thrash sound that we all appreciate. With the release of Titans of Creation, we find ourselves once again at these familiar crossroads however, fear not, this album is sure to please long time Testament fans.

With the first auditory glance, one may say something like “yes, this is the Testament that I know and love”. While that statement may be true, there is quite a bit more to be discovered within this album. With a classic lineup of extremely talented and versatile musicians: Chuck, Steve, Eric, Gene and Alex really deliver on Titans of Creation. After a quick listen to the album, I decided to do something a bit different and listened to the album in reverse. I am glad I decided to do this, because I actually prefer it this way. So, as we proceed in reverse mind you, we come to what would be an amazing introduction track, “Catacombs”. Catacombs is an Egyptian themed instrumental piece that sets a dark aura, similarly to ‘lighting the candles before a great feast’! Side note, this Egyptian theme is carried out throughout the album. Sticking with this theme, Curse of Osiris is a bruiser of a track that one could say certainly has a black metal influence. Eric Peterson incorporates some very gritty high vocals layered with Chuck Billy’s traditional harsh thrashy vocals, again we see a new spin on traditional Testament here. Having the monster known at Gene Hoglan behind the kit for songs like this is really beneficial. Gene grinds out some beautiful traditional blast beats that complement this brief climaxes that this particular song features. This track really has it all for me when it comes to a Testament track, its dark, aggressive and maintains that classic Testament sound. Another similar track, and my personal favorite on the album, Night of the Witch, is another combination of the variety that Testament can offer. Alex Skolnick and Steve Di Giorgio really incorporate some beautiful and aggressive melodic riffs in this one. And again, those gritty high black metal style vocals by Eric Peterson are sick!

There is still much to be said about Titans of Creation. Is it as potent as Brotherhood of the Snake? One may say that it is not quite, however that question mostly deals with personal preference and what elements of Testament you enjoy most. In summation, this is of course and thrash metal album, its good to see Testament throwing in elements of death metal, black metal and in some spots progressive metal. In my opinion, the greatest thing about Titans of Creation is that you know you are listening to a Testament album, even if you are hearing some new and unfamiliar things. There is really no questioning Testaments ability to stay current while still maintaining their classic sound and expanding their own boundaries. If you are thrash metal fan, there is no way you could be disappointed in what this album has to offer. If you have not picked up Titans of Creation, give it a shot. Bands as well as record labels need all the support they can get in these challenging times for the music industry. Stay safe, stay metal!