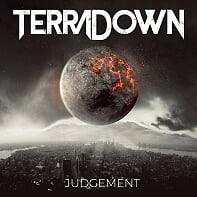 Picking up steam from The Netherlands, Terradown combines a variety of musical influences such as melodic death metal, thrash, some Amon Amarth-esque melody and even elements of more mainstream metal. This culmination of influences allows Terradown to reach out to a diverse fan base and pull listeners in from many of the subgenres that we are fortunate to have within the metal community. It is evident that they have a good grip on the Dutch metal scene with their several of their accomplishments, namely, winning the 2019 Dutch metal battle and the 2019 Battle for Wacken in their country. This is a dream for any metal musician and Terradown has accomplished this feat quite early in their career which is very reassuring to see.

Released just last month is Terradown’s debut full length album entitled “Judgment”. Like previously stated, this album has a lot of musical diversity built into it and it can sometimes be a bit of a surprise to the listener. Melodic guitar riffs accompanied with harmony from guitarists Jasper Verhorst and Mark Link combined with very solid in-the-pocket feel from drummer Dimmy Marcelissen and bassist Joris Koenraadt, seem to be Terradowns most prevalent sound. Vocalist Nick Brouwer has a very strong open style growl somewhat reminiscent of Jan-Chris de Koeijer of legendary Dutch death metalers, Gorefest.

Two of my favorite tracks on Judgement are coincidentally the first track, “Statement” and the last track, “Into the Devils Lair”. Statement kicks off the album with a great melodic feel accompanied by an almost ‘marching’ style back beat that would no doubt get any metal head headbanging. This track has great energy and also an awesome acoustic interlude in the middle that builds towards a climax near the end of the song combined with some great melodic leads on guitar.

The tenth and final track on Judgment is “Into the Devils Lair”. I chose this song to discuss because personally, I believe its one of the best written tracks in terms of composition as well as skill, on the album. This track features some awesome harmonized guitar parts while still maintaining a melodic base, which I find interesting.
Terradown does melodic death metal really well and I personally would love to see them move more in that direction while still maintaining the sense of diversity that they have already accomplished. I believe it will be enjoyable to see these guys grow over the years and see what they transpire into, they are on the right path and should be definitely proud of Judgment.