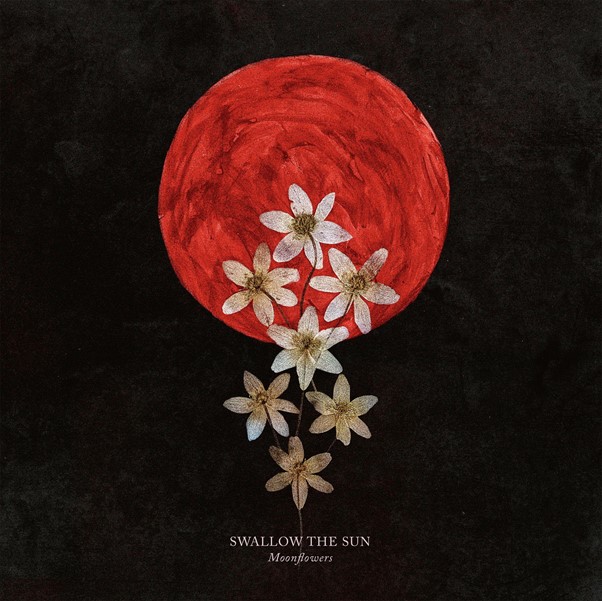 There’s no band in metal, and possibly music overall, that can encapsulate the feeling of romance as well as Swallow the Sun. A gut-wrenching, painful romance, but a profoundly beautiful one as well. Their last release, “When a Shadow is Forced Into the Light” perfected that feeling and the listener could feel all the pain behind every word of the record. However, the album ends with a feeling of hope about it as well and that story now continues with “Moonflowers.”

The album for which the moon in the cover art was painted with the band’s songwriter’s Juha Raivio’s own blood immediately seems brighter than its predecessor. The lightness of it is continued throughout, and with it a certain acceptance of past events; moving on – both sonically and emotionally. Of course, the traditional death parts of Swallow the Sun are very much present and brilliantly delivered by Mikko Kotamäki, who sounds alluring with his cleans and desperately sorrowful in his harsh vocals.

“Moonflowers Bloom in Misery” opens this record and sets the tone well, mainly with the drums, which act as a sort of lifebeat throughout this record along with the heavy symphonic touch. A lot of attention seems to be on the catchiness of the choruses, which is exemplified in both this track and the next one – “Enemy.” The latter is overall one of the softest tracks on the album and could probably do with a few heavier passages.

The first single, “Woven Into Sorrow” continues in a similar vein, but seems to be a more traditional Swallow the Sun songs, with a darker aura around it that peaks in the latter half as those lovely doomy influences collide with the harsh vocals and the romantic symphonics that accompany it. The album reaches what is probably its peak with “All Hallows’ Grieve,” a thoroughly beautiful piece featuring Cammie Gilbert of Oceans of Slumber who is a brilliant choice for a collaboration on this record as she brings the romance of the song to a whole new level with her enchanting vocals, much like she does in her own band.

Sadly, the album is not without its drawbacks, which seem more apparent in the latter half as the songs “The Void” and “The Fight of Your Life” don’t really have much to offer and do act a bit as filler material. They’re not horrible, but compared to their previous album and the rest of the album they’re not exactly up to par and seem a bit uninspired and they don’t add any diversity to the album either. It may seem harsh, but especially “The Void” makes me understand why the band is often criticised as being boring, whereas the latter does feature some cool guitar work and a more black metal inspired sound that sets up the final track.

“This House Has No Name” is an intriguing song from its start and also the heaviest on the album. The escalation of the first few lines, as well as the entire album reaches its peak in a few glorious and cathartic seconds where the band unleashes its full extreme metal potential. I wish there was even more of it, perhaps a full song of emotional outcry, because the album has this feeling of being incomplete in ways. It’s soft, but there’s more hiding behind it, and the softness feels like it’s about to explode, but it never fully does, not even with this last track. Still, as far the piece itself goes it’s very nice.

“Moonflowers” is a pretty difficult album to rate, especially as it follows what was one of the best albums of 2019 and one of the best things that doom/death has ever created. It’s a record that’s romantic and calm and beautiful, but if you listen to it closely it feels as if all of that is skin-deep. The pain underneath lingers and while I don’t think it’s a spectacular release, it is still pretty solid and surprisingly catchy, which makes it easy to listen to and it might be a good start for some people who are less accustomed to extreme metal, but enjoy some romantic doomy melodies.

1. Moonflowers Bloom in Misery
2. Enemy
3. Woven Into Sorrow
4. Keep Your Heart Safe From Me
5. All Hallows’ Grieve
6. The Void
7. The Fight of Your Life
8. This House Has No Name