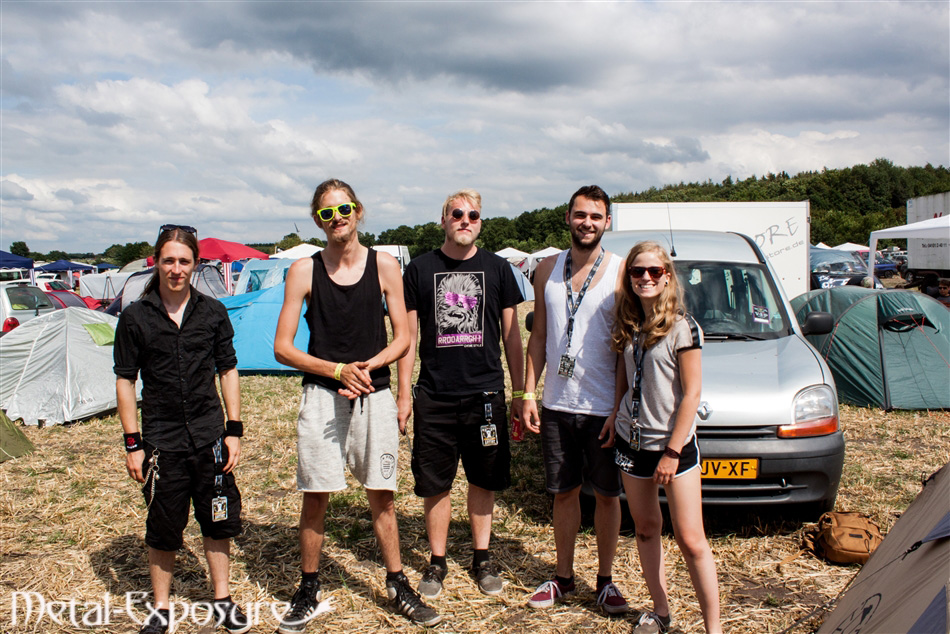 Chances are that you’ve heard of the Wacken Metal Battle (MB) and that you are aware of the band representing your country. The finalists travel to the illusive Wacken Open Air, where they will compete with other bands. How does a MB-finalist prepare for the show and what does a day at the campsite look like? Metal-Exposure followed Dutch melodic death metal formation Purest of Pain for a day in order to find out.

Upon arrival at the Purest of Pain camp on Wednesday, the band members and the two crew members are sitting in a circle in front of their tents. Nobody is willing to move because of the heat. Any hint of wind or a sign of clouds is welcomed with relieved sighs. This isn’t the only reason why there is no movement: there aren’t enough chairs. When anyone leaves his or her spot, the game of musical chairs is on. 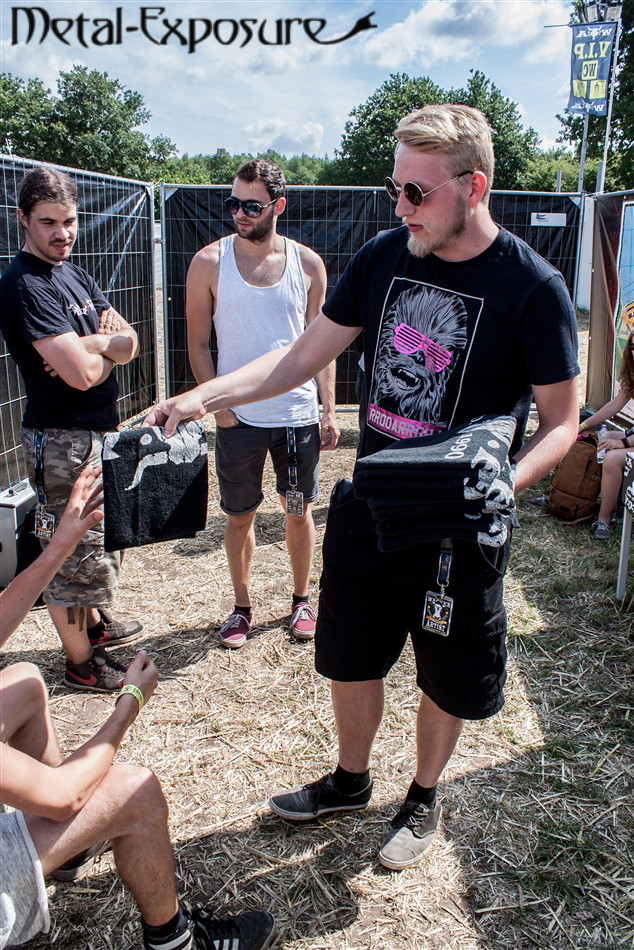 en in metal
The guys and girl have to wait several hours before they can pack their stuff and leave with the artist shuttle to the Bullhead City Stage, where they will perform at 18.05 PM. With a lot of time to fill, there isn’t a better moment to look at the festival program. It starts with talking about half-naked women on stage during the Steel Panther show, but the discussion takes a more serious turn when they see Arch Enemy on the bill.

Vocalist Jesper de Kruyff thinks that the band could have considered to go with a male vocalist instead of the new female singer Alissa White-Gluz. “Maybe they fear that they wouldn’t stand out anymore with a male singer,” he suggests. A fear that is unfounded according to Purest of Pain, because Arch Enemy’s music is good. Guitarist Merel Bechtold adds that having a woman as singer is part of the band’s DNA. The conversation about women in metal continues for a while until guitarist Michael van Eck closes the subject with a quote of Opeth frontman Mikael Akerfeldt: “I don’t have anything against it, but some of those bands get recognition because of the fact that they have women, as opposed to whether the music is good or not.” 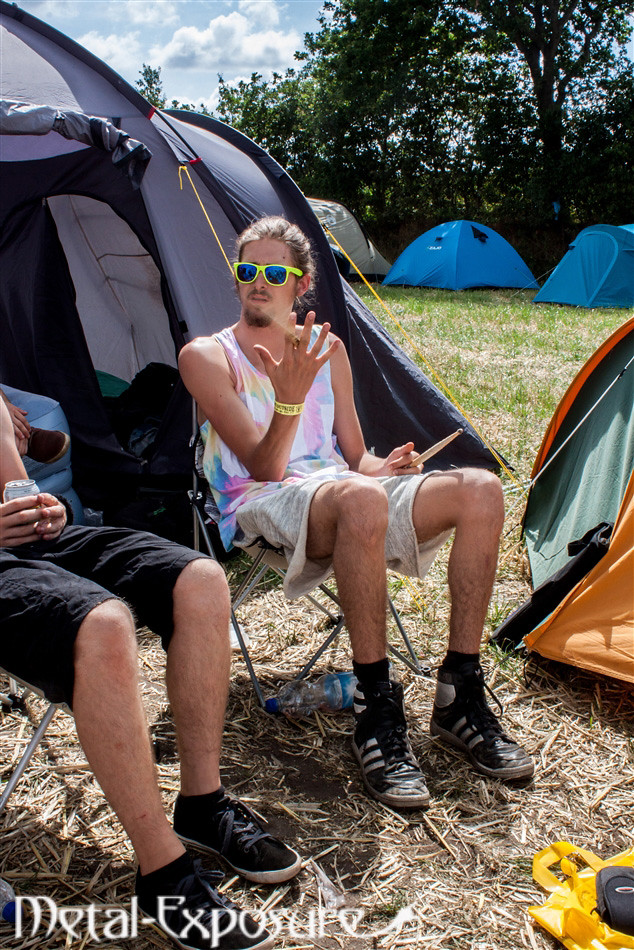 Wardrobe issues
Slowly the preparations before the show start. Michael brings out his guitar and talks to bassist Frank van Leeuwen about the stage cams that they will place on their instruments. “Don’t touch my guitar,” says Michael when one of the guys reaches for it. “It’s tuned and cleaned. You can do anything with it after the show, except break it.” “So I can take a dump on it?” asks Jesper teasingly.

Not only the instruments need to be prepared, but also the stage outfits. If you thought girls have wardrobe issues, think again. Merel (by now called Berend Bechtold by Jesper, because that would be a suitable name for her if she was a guy) is the first to have her outfit packed in a bag. “I want to wear my princess shirt,” states drummer Jop Engels. It turns out to be a sleeveless white shirt with blue, pink and yellow splashed all over it. “What happened to the princess shirt?” asks Jesper when he sees Jop wearing a black shirt later on. “Frank wouldn’t allow me to wear it.” 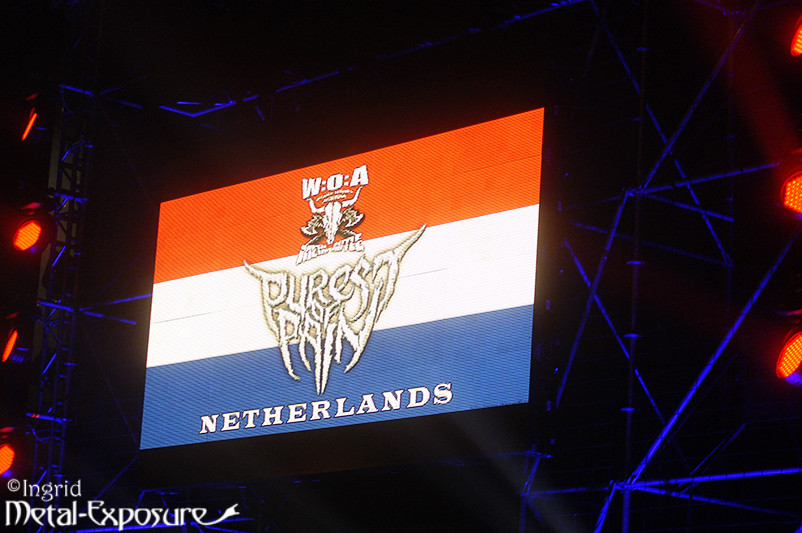 The Wacken Experience
Around three ‘o clock, the march to the Bullhead City Stage begins. By now, almost all band members are documenting the entire Wacken experience on their little stage cams. They look like underwater camera’s, which according to Michael, they can be used for as well. “Or in a swimming pool..”

A few hours later, it’s show time. This gig is probably one of the biggest Purest of Pain has played so far. In front of thousands of people, in what is said to be the world’s largest festival tent. Nervousness does not seem affect the band. The Dutch five piece plays an energetic show and they manage to excite the audience.

In the end, Purest of Pain did not end up in the top 5 of the Metal Battle. Rumor has it that they finished sixth. The Spanish band [In Mute] won. While meeting up with Jesper and Michael before the Emperor show on Saturday, they explain that they don’t really mind. Jesper: “It didn’t really feel like a competition, all the bands deserved to be here. We have already won, because we got the opportunity play here. And winning the Metal Battle in the Netherlands proves to me that Purest of Pain is on the right track.” 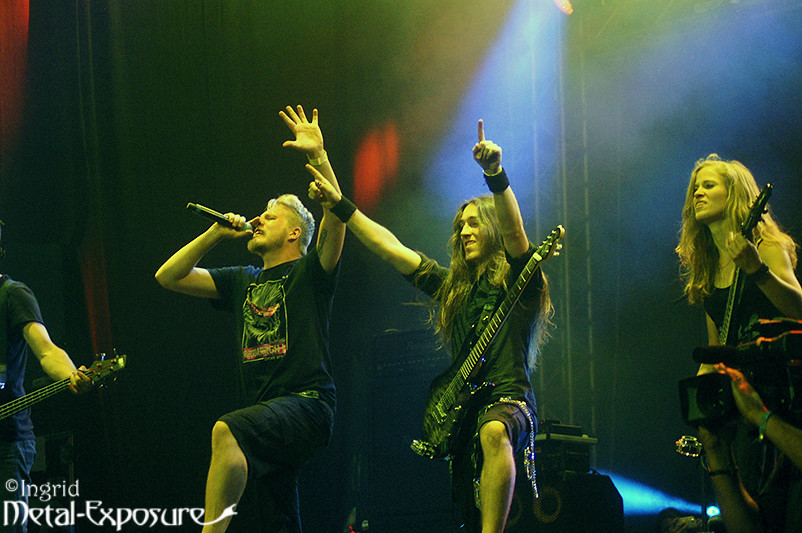