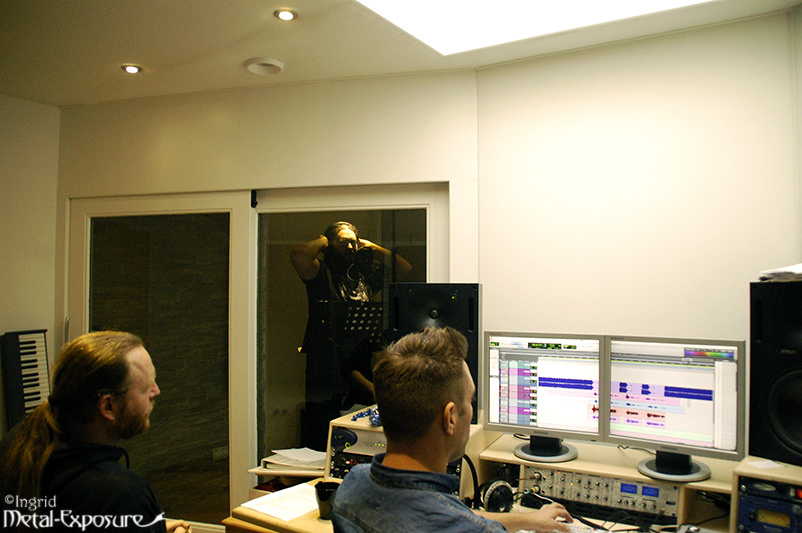 Report by Laetitia and Ingrid
Dutch folk metal formation Heidevolk is currently recording their fifth full-length in the studio and the band gave Metal-Exposure the opportunity to make a report about the recording process. While heading to the studio in Amsterdam, we pick up drummer Joost “Vellenknotscher” Westdijk. To the question “Do you go there every day?” He replies jokingly: “No, that is bad for my health.”

The band is currently recording the vocals in the Split Second Sound Studio. The recording of the instruments happened over the past months. Upon arrival vocalists Lars Vogel and Mark “Splintervuyscht” Bockting are having lunch with toasted sandwiches, a standard studio meal according to the guys. While looking around in the studio, Joost says: “So, it is because of this place that our hairs are turning grey.”

Mark and Lars are discussing what they will be doing today. “It would be nice if we manage to finish two songs today,” says Lars. Mark agrees: “Luckily we’re not having a zombie day like last week. On those days you spend the entire day singing and when you are asked to sing something in another tone, you can’t hear the difference between the tones anymore.” 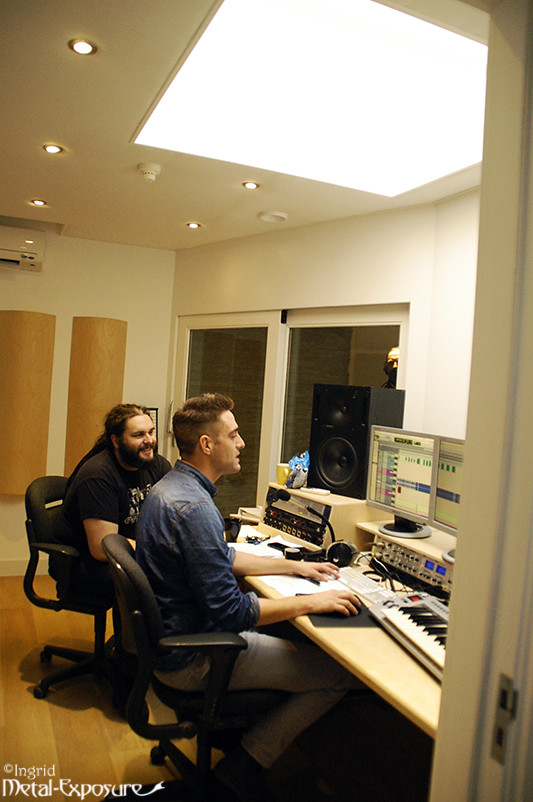 The guys start with ‘coloring’ the vocals as they call it. It means that they are giving the vocal lines more richness by adding vocals in different and more tones. In the meantime, we’ve entered the recording room. A track is played on the computer and Lars mentions: “What you are hearing now is still very raw. It sounds very honest so to speak. The instrumental parts you hear are actually from the demo.”

Mark enters the recording booth and the track is started. Out of a sudden, the music gets interrupted by a soft female voice that says: “Hé.. psst..”. It turns out to be a radio commercial of the dating site Victoria Milan. Lars and producer Bouke explain: “In each of the tracks we’ve added such jokes, to tease Rowan (“Roodbaert”). We send all the demos to him at the end of every day, but the jokes won’t be on the album of course.”

Vile
While Mark and Lars continue recording the vocals, Joost takes us downstairs where producer Jochem Jacobs (Textures) is working on the instrumental tracks. “The real musicians are here,” says Joost. Jochem points to a dark window and explains that the instruments were recorded in there. “Here we blew each other kisses until the recordings were done. We did the string ensemble last week. I think the album will be great!”

We get to hear some of the instrumental tracks, until the computer starts to stutter. “Damn it. This is because I have other processes running on the computer.” After a few tries, Jochem decides to play another song. “This one is just too heavy.” When this tune also falters, everybody has to laugh. The producer says cheerfully: “This is strange, but you can laugh. It is kind of funny. This is just how things go.” When the song is played from an mp3, it finally works. Joost and Jochem discuss the production and they agree on that: “It could sound a little more vile.”

Ethics
A little later we head back upstairs where Lars and Mark have started coloring a different track. Bouke is demonstrating a certain vocal line and he sounds a little off key. Lars says teasingly: “Nice ha, having a vocal producer who can’t sing”. Joost has already thought of a parody on this specific line and sings it aloud: “Eén met het tosti ijzer” (One with the sandwich toaster).

After this line is done, the guys start to work on Heidevolk’s first English song of their own. Mark starts. He has been eating candies for his throat all day and enters the recording booth while eating one. When we ask if he’ll sing while he is eating the candy, Joost replies with a joke: “Yes, our work ethics are nowhere to be found.”

Lars is next to record a piece for the English track. He hears a drum track that he doesn’t recognize immediately. It appears to be the outro. Lars asks Joost: “This sounds great, have you already recorded it?” Joost answers sarcastically: “No, I’ll do that in a minute.” While it dawns on Lars that the drums have been recorded months ago, Bouke says ironically: “Yes I’m curious with what new ideas you’ll come up with now. We can record a Mongolian children’s choir or something similar!” Not long afterwards, another day of recording ends and we get to toast to the new Heidevolk album!

Want to know more about the upcoming Heidevolk album? Check out our interview with Joost!