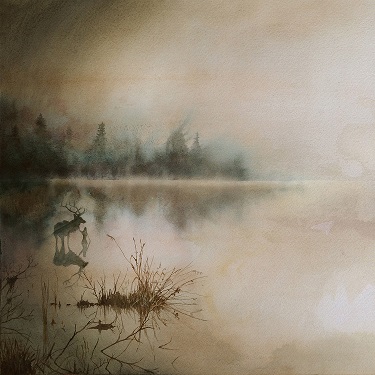 The first things I heard regarding about Sólstafir‘s sixth full length Berdreyminn weren’t too convincing. The Iceland post rock formation is often accused with being too ‘hipster’, ‘too soft’, and ‘poppy’ and when the first tracks of Berdreyminn surfaced, these were the exact terms flying around. Being one of those Sólstafir enthusiasts, I couldn’t wait to make up my own mind about Berdreyminn when it landed on my desk.

There is a lot to be said about Berdreyminn and one of the first things to conclude is that the musicians did take a step away from the intricate songwriting on Ótta and have, albeit discretely, embraced a more accessible sound. At first you won’t really notice it but most of the tracks are built similarly: starting out minimalistic with a riff or pattern that slowly increases in pace and fierceness. While this is a Sólstafir trademark, Ótta featured more diversity in the structures and what is most noticeable is that the drums on Berdreyminn are mainly employed to create a groovy and catchy atmosphere rather than making the songs spark (some exceptions there: ‘Naros‘ is wonderful). This is not a call for blast beats or Eyjafjallajökull heaviness but when hearing Ótta and Berdreyminn next, the first appears to have a more distinct rhythm section.

Having stated this, the next thing to say is that what you hear on this record is still typically Sólstafir. Berdreyminn is not so different from the band’s native land: rugged, with twists and turns, a staggering beauty and an undeniably melancholic undertone. The Icelandic musicians tread some new grounds, for example on ‘Isafold‘, that opens slightly synthwave-ish or the ballad-like ‘Hula’: while you are dreaming away on the gentle operatic vocals you can envision the rays of the warm sun on your face after a soaking cold Icelandic rain shower.

Another case in point is the aforementioned ‘Naros‘. The song opens with simple guitar work, a couple of notes that are the base of the entire song and the drenched in longing vocals of Aðalbjörn Tryggvason. The tempo picks up after a while and moves along to murky riffing (a typical feature of this record), the vocals become more powerful and while the song remains heavy. The rhythm section keep it to an accessible level, which in my opinion they should have departed. ‘Hvit Saeng‘, another favorite of yours truly, opens with a honky-tonky atonal piano part and is a heavily atmospheric track. Here the more expressive use of vocals, give the song its own character.

Berdreyminn might be the record that will split Sólstafir fans in two camps: those will go on searching for another, ultimately more (post) metal band and those who will enjoy Berdreyminn for what it is: a decent record in the discography of the Icelandic group that will still conjure up images of black sands, the desolate interior and impressive glaciers with its magnificent soundscapes.

By Laetitia
Release date: May 26, 2017
Record label: Season of Mist