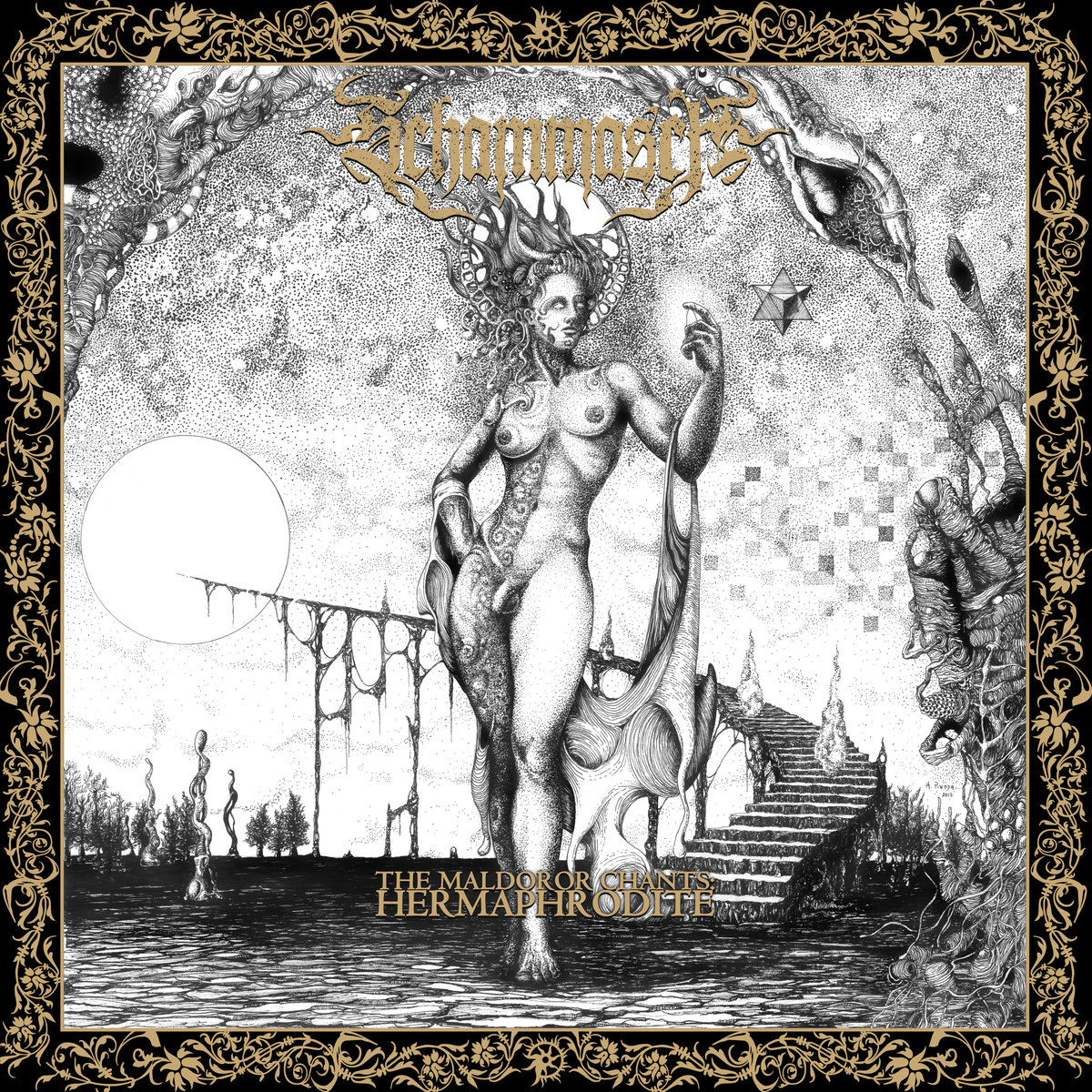 Schammasch are fast on becoming the (Swiss) poster boys of avant-garde black metal. Their monumental release Triangle (2016) showed a grand talent for song writing, composing and recording a layered atmosphere; the album has yet to leave my playlist since December 2016. I daresay this is one of the best black metal acts currently roaming this planet. No surprise then, that I immediately jumped on the band-wagon with their next EP: The Maldoror Chants: Hermaphrodite.

However, due to overfilled schedules, holiday intermezzo’s, occasional procrastination and even outright laziness, I never got ‘round to write something about it (release date 9-june-2017, Prosthetic Records). Of course, Metal Exposures’ Leading Lady annex Big Boss does not tolerate this kind of tardiness. Helped by the threat of eternal torture (possibly with hungry unicorns – believe me, it is not pretty), I decided to finally commit this review to metaphorical paper.

A threatening, slowly rhythmic keyboard/synth intro, lethargically making way for reverbed voices, transcending into simple if layered, reverberating riffs and subdued, slow beats. The intro already provides that what made me listen to Schammasch so many times over on Triangle and Contradiction. The music is so densely layered and rife with melodies hidden within, making it very hard to put away or exchange for something else.

After a short pause, the music starts taking on a more solid form and develop a melody, draped around the by now bombastic, dragging slow beat. Welcome to the forest in which the Hermaphrodite sleeps, surrounded by flowers while overflowing itself with tears.

The Maldoror Chants is a poetic novel by French writer Comte de Lautremont (1869), on the misanthropic, blasphemic and at times nihilistic figure of Maldoror. This work, inspiring many surrealists, has also inspired Schammasch, who have announced the Chants will be inspiration and theme for more releases to come. This is their first; to be more specific, Canto 2 part 7 is (almost?) completely sung and spoken on this EP. It deals with the Hermaphrodite, one of the odd apparitions of the Maldoror Chants.

The hermaphrodite, a being too beautiful to be real, yet thinking itself a monster, is also a hunted creature. Contradicting this is her compassion and intellect, stemming from his inner angelic and aesthetic modesty. Maybe in response to its own perceived monstrosity. Only in his sleep does she find peace and actual joy, whereupon awakening (s)he is faced with being a monster again.

The music is, as mentioned, is a thickly layered, dense composition of heavy riffs around drums that follow the cadence of the (English) sung/spoken words. The pleasant vocals by C.S.R. are here and there augmented by tenor chants, which had me humming along, unmindful of my colleagues or other (annoying) beings around. The evolution of melody on ‘May His Illusion Last Until Dawn Awakening’ is indeed a temporary joyful intermezzo before the heavy, dualistic and fast ‘Chimerical Hope’. The vocals become terse, more forced when chanting on the melancholic and impossible fate of the Hermaphrodite. The EP concludes with ‘Do Not Open Your Eyes‘, begging the Hermaphrodite not to open her eyes and remain in his joyful as well as peaceful sleep.

The composition on The Hermaphrodite always feels controlled, the music being exactly where it needs to be (and not where it’s not supposed to be); the art of omission. The mixing and mastering also helped in making the sound dense and creating a heavy (or weighty burdened) atmosphere on the EP. Luckily this heavy drape is lifted when called for. Maybe the EP doesn’t carry the aggression of some of the work on Contradiction, but given the theme and cadence that would also be uncalled for.

If (musical) metaphors are layers, Schammasch is eligible for a Michelin star in stacking them like a decadent lasagna. Although perhaps less cryptic than Triangle, The Hermaphrodite is a path and opus to an impossible aesthetic level and impossible being, the truly higher art so to speak. This is, by the metaphor itself, is forever out of reach and doomed to by its very own existence. Schammasch have however, by prowling along this path, clearly begun redefining aesthetic definitions in music. The EP is, simply put, incredibly beautiful.

Editor’s note: The complete English version of the Maldoror Chants can be found here, read by Allen Leper and Arielle Noon.

Tracklist
1. Prologue
2. The Weighty Burden of an Eternal Secret
3. Along the Road That Leads to Bedlam
4. These Tresses Are Sacred
5. May His Illusion Last Until Dawn’s Awakening
6. Chimerical Hope
7. Do Not Open Your Eyes