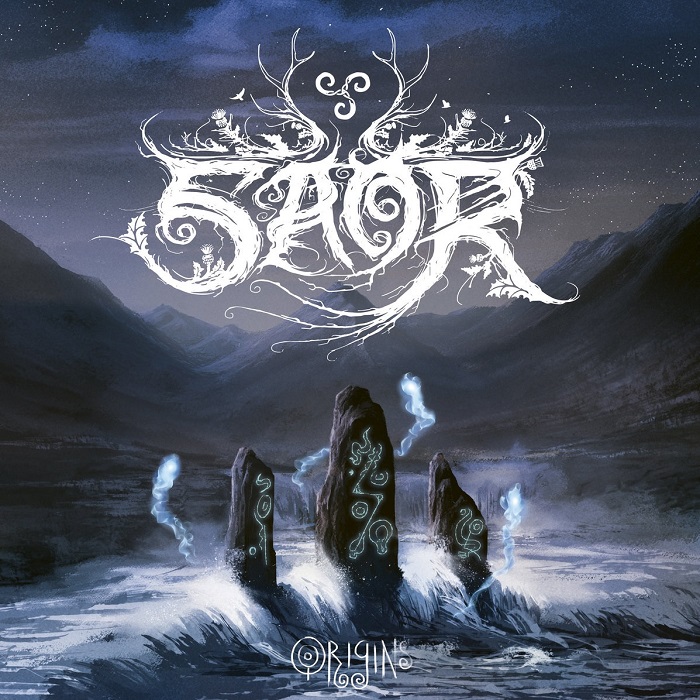 Saor has, since the release of “Aura” (2014), “Roots” (2013) and the all the subsequent releases, set the standard I adhere to with respect to Scottish atmospheric black metal. The band, by Andy Marshall (Fuath, ex-Falloch), will release its fifth full-length, “Origins”, on the 24th of June 2022 (Season of Mist). So how does “Origins” sit with this, and does it meet the bar?

Boy, was I instantly hooked when listening to “Aura“ for the first time in 2014. Honesty bides me to admit a bit of fanboying may have been the case in catching his live appearances. Suffice it to say I’ve heard his music once or twice. No less of a hook is “Origins” – although some marked changes with older material are present.

The album clocks in a bit over 41 mins, which is very much in line with their previous full-lengths. The songs, however, are typically less than ten minutes, which makes space for six gems of songs (instead of the typical four). Tracks that have not left my playlist ever since I got my hands on the promo.

The opener, “Call of the Carnyx,” is a straight call to (forgotten) arms, with expansive riffing and a brilliant melody. Listening to it makes you want to raise the sword, swing it around, if only just for sheer pride. Who knows, maybe decapitate a few in the process and conclude the victorious day by having a drink at a campfire near the lake during mid-summer.

The album gets more immersive with “Fallen” and “The Ancient Ones.” The latter is more layered, whereas “Fallen” takes its time to build up the (rather folkish) guitar melody around the pretty (well, did you expect anything less?) bagpipes that conclude the song.

Overall, the album focuses a bit less on stretched atmosphere building and feels somewhat hurried at times. Well, perhaps not hurried. Joyous would be the better term. By no means does it get cheesy, although “Origins” is definitely an ‘easier access’ experience compared to its predecessors “Guardians” (2016) and (the, in my opinion, too short) “Forgotten Paths” (2019).

Marshall’s vocals have been called ‘barky’ at times. Although I don’t fully disagree with this description, this definitely does not give him (and others) the credits deserved. “Origins” has so many styles beautifully combined – cleans, screams, whispers and combined vocals included. Again, without going over the (proverbial highlands’) top.

Being the second single in promoting this album, “Beyond the Wall” had to immediately hit the mark at opening chords. And boy, does it do so. Perhaps the song with the most attractive and intricate guitar work of the release. Yes, synths and bagpipes come into the equation too, but as with the other songs, this is done very nicely indeed. I have to tip my hat (once again) to the composition and songwriting capabilities of Andy Marshall.

The recording quality is the last but very laudable feat on “Origins.” Of course, a leap compared to “Aura” and “Roots”, and for ‘modern standards’ a very pleasing way of mixing. Call me a snob, but I am quite fed-up with the aforementioned standards of production of at least some of the bigger bands. I know people generally listen at high noise floor levels (cars, bikes, planes, Bluetooth speakers, etc), so music needs to stand out. But a brick-walled production just takes the fun out of listening to music for me. Luckily, the production on “Origins” leaves sufficient room for the drums to sound crisp and detailed, while the guitars and barking vocals don’t miss the ‘in your face’ effect when called for.

“Origins” is a real treat to listen to, the composition is just brilliant and each song brings a smile. Where the older material was atmospheric, at times heavy with nostalgic yearning, this album builds Saor’s trademark aesthetic compositions on somewhat brighter foundations. I for one look forward to this summer of seeing this album promoted on the many festivals in the pipeline!