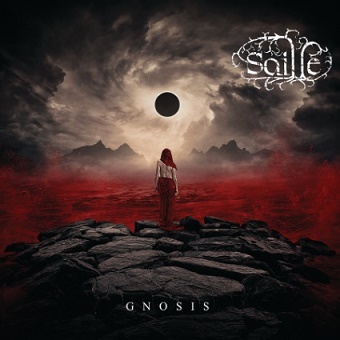 By Wouter B.
Presumably to taunt Zeus, Prometheus brought fire (back) to humankind. Likewise, presumably to taunt god, the Snake tempted Eve to consume the apple from the divine tree of knowledge of good and Evil. On the 13th day, Saille shall release another wicked creation, Gnosis. And I saw that it was good. Presumably to taunt everyone for no particular reason.

Belgian Saille I’ve come to know as another (under)appreciated gem (like Wiegedood, Evil Invaders) originating from our neighboring land to the South. Saille leans heavy on the darkened progressive side of black metal and are always very well versed in their lyrical topics – e.g. classic mythology, Lovecraftian works and any and all stories that have some metaphoric significance with the darker aspects of life. On their wonderfully if somewhat staccato 2014 release Eldritch, their music could be considered as a distant branch-off of the tree planted by Emperor with Prometheus – The Disciplines of Fire and Demise. Although at a more accessible and hugely lowered amount (for the occasion) Babylonic confusion of tongues. With Gnosis (release 13th of March 2017), Saille created a concept album revolving around ‘knowledge’.

The search, development and application of knowledge, with its many mythological parables, is a rich subject which can be found many times within heavy metal. That leaves the inevitable question: was this not all done before? Well, Saille comes implicitly with the answer themselves, as they seek to make “a concept record exploring the world of the Promethean ideal and its Luciferian counterpart.” This we have seen before, throughout the oeuvre of said (yes, you’ve guessed right) Emperor of Norway. However, as is the nature of the gathering of knowledge, different ways may eventually lead to the same place. Perhaps the journey itself is more interesting. Indeed so with Gnosis, as this is quite the piece in my opinion.

The music of Gnosis is dark, heavy, massive, epic and bombastically orchestral at times; as can be felt and witnessed on the Prometheus. The staccato and progressive side, although still present (e.g. Pandemonium Gathers) has made way for a more aggressive and (at least to me addictive) accessible sound. The compositions are like fortresses, despite more sensitive parts here and there, like the opening voice and instrumental bridges in Blôt. This latter is a grand manifestation of the co-operation and competition between the guitars and the screaming and raging vocals of Dennie Grondelaers (put this song on your setlist, would you?). Magnum Opus and 1904 Era Vulgaris I count as personal favorites of the album, setting a brooding yet enlightening atmosphere initially but quickly evolving on Era to a merciless, hopeless and pounded landscape, doomed to wither and die.

The music and drums especially are something that will blow you away in a maelstrom of sound, although unfortunately this is mostly due to the unashamedly brick walled mastering (average of DR4, really guys?). Despite this, the voice of Dennie as well as the guitar sound is nicely distinguished when called for.

Saille has evolved in their sound to a darker and heavier kind of atmosphere with Gnosis. The album is rock solid piece of work, despite the mastering, which invites evolving from casual listening to more, more and once more!