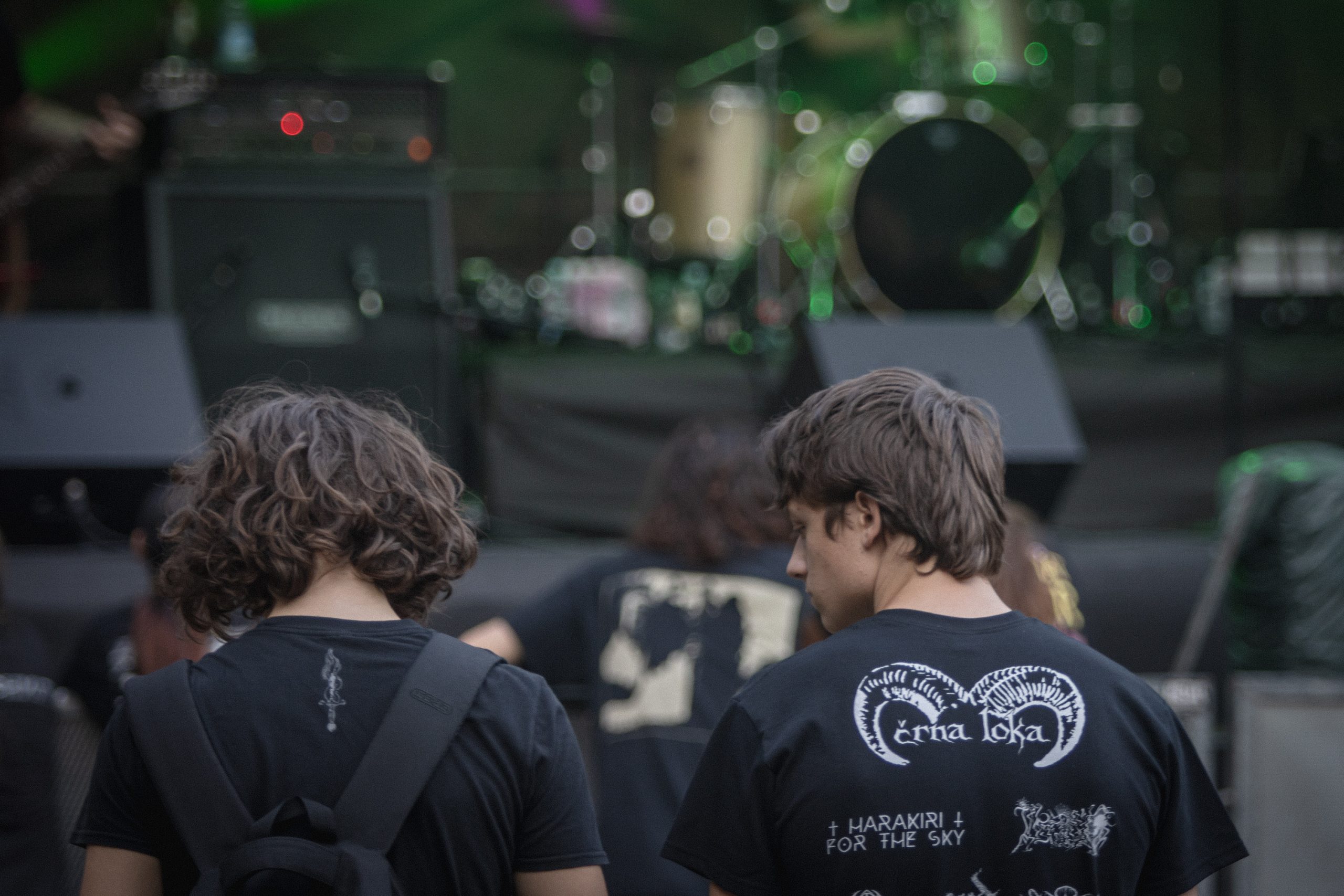 Words by: Didrik
Photo credits: thanks to Črna Loka

Waking up on day two I felt surprisingly fresh and without any tinnitus, which definitely confirmed my earlier assertions that the sound was just a bit too quiet. Sitting here after day two, however, my neck feels rather heavy and tired and that is a sign that day two was more exciting and the dark, twisted fairytale reached its climax.

I was a bit late again (this time because public transport is stupid) but still caught most of the first band – Sovrag. The first thing I noticed when entering the area was a man casually sitting in a wheelbarrow and enjoying the show – as one does. Much like the day before this opener was local and played something akin to death metal. As I’ve seen them before in April I was mostly curious how they’d compare and I’m happy to say the bigger stage benefitted the band and gave their vocalist a lot more space to move around and actually perform. There were quite a few more people already there than the day before, something that can most likely be attributed to it being a Friday and people sneaking away from work an hour earlier. Anyway, a solid start to day two that already got a few heads moving to the rhythm.

After some quick exploration of the surrounding fields and woods (no mushrooms, very disappointed the organisers planted none) it was time for Ghost of Veronica – a band that really promises a lot with its descriptions of melodeath/symphonic black metal and the only keyboards of this festival. But while their ideas and concepts are cool and exciting the execution falls rather short and seems to show a lack of experience with its band members. Still, the seeds of something that could potentially be very interesting are there, which they show with their song “Izidor,” an iteration of a famous Slovenian children’s folk song about a shepherd and his sheep.
Meanwhile, in front of the stage two lads broke into a waltz and by “waltz” I mean something that was very vaguely similar to a dance if you were drunk enough. I was not. 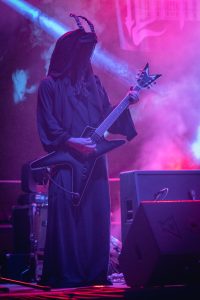 Black hooded figures with horns, a speechless image of death and a massive tome from which a sermon was to be conducted – Daimona took the stage and it was very nice to see a band that understood the value of good costumes. If this really were a fairytale this would be the darkest hour before the dawn…except there is no dawn, but that’s not important right now. The third of the four Slovenian bands on the night was impressive and their rather quick rise to prominence for a young band in the local scene is clearly not a mistake. The atmospheric black metal sound driven by the drums sounds positively evil to accompany their look while the entire performance is somewhat reminiscent to that of Batushka – decidedly less candles though. Luckily, darkness has descended upon the area by now which gave the band’s hellish shrieks and their light play a lot more potency while the crowd could now for a while be counted in triple digits. To my right the man in the wheelbarrow was clearly deep in thought and enchanted by the performance and most certainly not drunk.

If we turn back to the actual festival and its organisation for a second, I have no noteworthy criticism as the sound for all bands continued to be very good and everything seemed to be running smoothly and my excitement rose as the band I’ve been waiting for all day was about to take the stage – Srd. I’ve not seen any band more often than I’ve seen these Slovenian black’n’rollers as this tally is now at six. Opening with “Ognja prerok” from their second album of the same name the band have quickly shown they’re in fantastic daily form and ignited the crowd. Naturally, as is my habit with all bands I at least somewhat care about, I was quick to take my place right by the fence to be as close as possible. I can’t talk about Srd without mentioning how massive of a part to their stage presence the vocalist, Goran Slekovec, is. People who really look like they belong on stage are rare and bands that have them are often the ones that get called great in live performances as oppose to just good.The band mostly played songs from their second release, “Ognja prerok,” one of those being “Sreča na vrvici” (for double blasphemic value this same title is shared by a children’s movie and song) for which Slekovec presented a noose and threw it into the crowd and thus inadvertently also presented that dichotomy of suicide I mentioned in my report of day one.

After a lot more headbanging and being whipped in the face by hair, the Srd set was coming to an end, and due to the sound being really good this is probably my favourite show of theirs that I’ve seen. The only thing that was missing was more people to add that final touch of great atmosphere. As the lads departed the stage, calls for an encore soon followed and the band came back for another quick track – their cover of the punk rock song, “I Kill Everything I Fuck.” Despite the Czech Inferno being the de facto headliner on the night, it was clear the best and most awaited show of the festival on day two was over and the crowd diminished by half before they’d begin at around 11PM, about 15 later than they were planned to play.

The Czechs had a similar look to the aforementioned Daimona, although their stage presence seemed a bit less daunting for some reason, despite the vocalist , Adramelech, getting very into his role of death and in certain light very much looking like a skeleton as he slowly weaved his bony fingers in front of the microphone. With his very deep growl he added a rather atmospheric layer to the band’s black metal sound, but overall the band lacks something more headbangy or energetic for this hour and this was reflected in the crowd that was still remaining as most were simply standing and at most nodding along slightly. 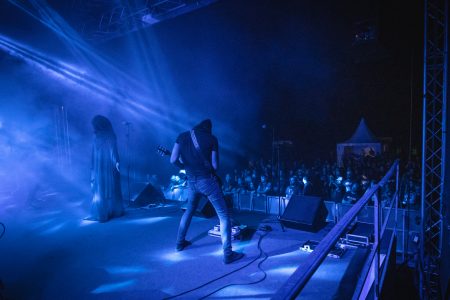 Inferno’s set ended rather quickly, which I honestly wasn’t displeased about as my legs were very much ready to go home and rest. The first edition of Črna Loka was finished and the overall effect it had on me was definitely positive. The location is great, the organisation seemed fairly flawless and given the lack of a real big headliner on day two the turn out was reasonably good and probably peaked at about 500 people, which should be a good stepping stone for the next few years that will likely be key in determining whether this festival can remain and establish itself. For now, all I can say that this was a good event and I hope more people attend next year to fill out that large area in front of the stage a bit more proper show atmosphere. 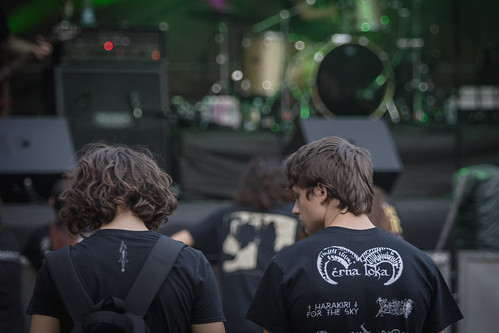 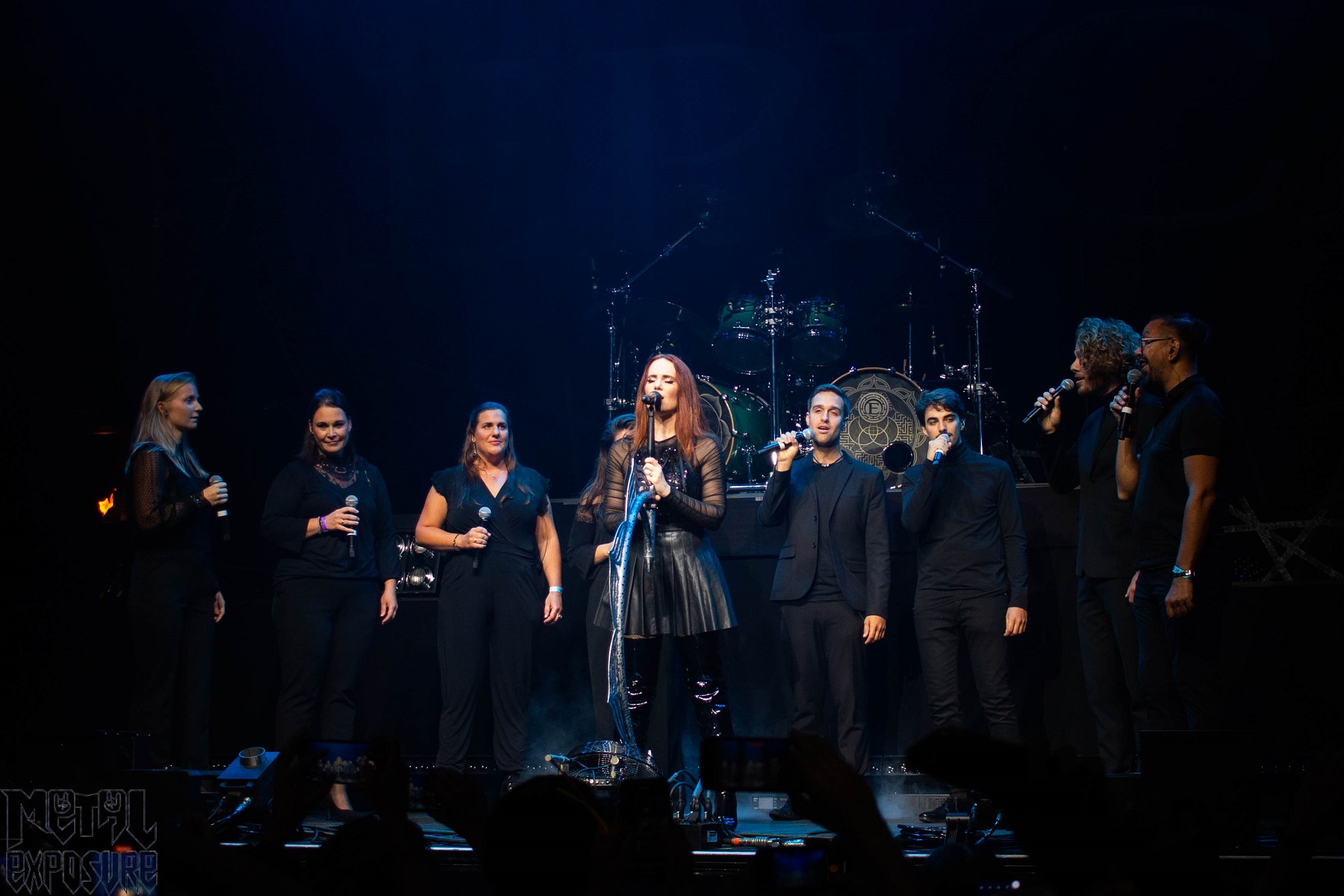 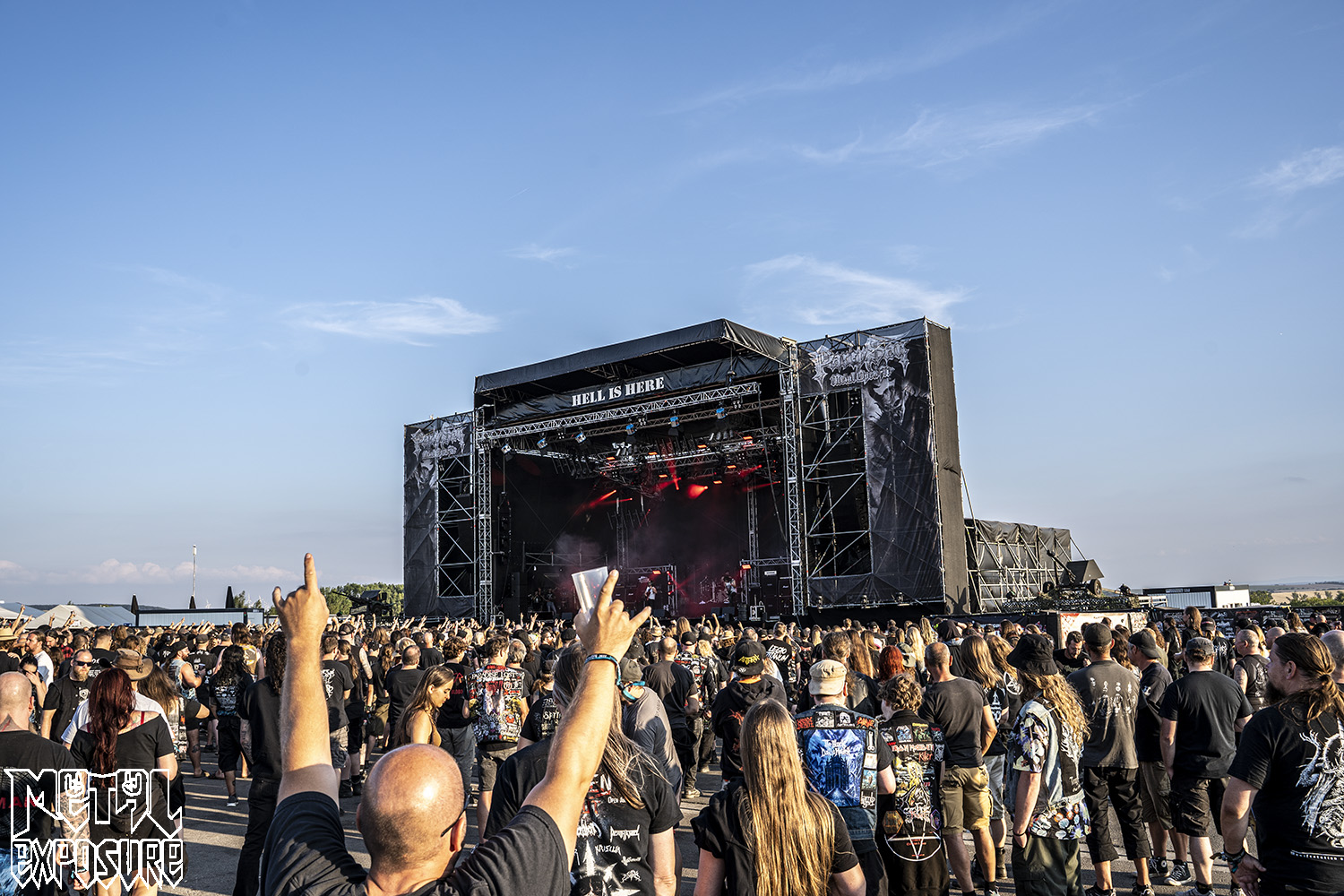 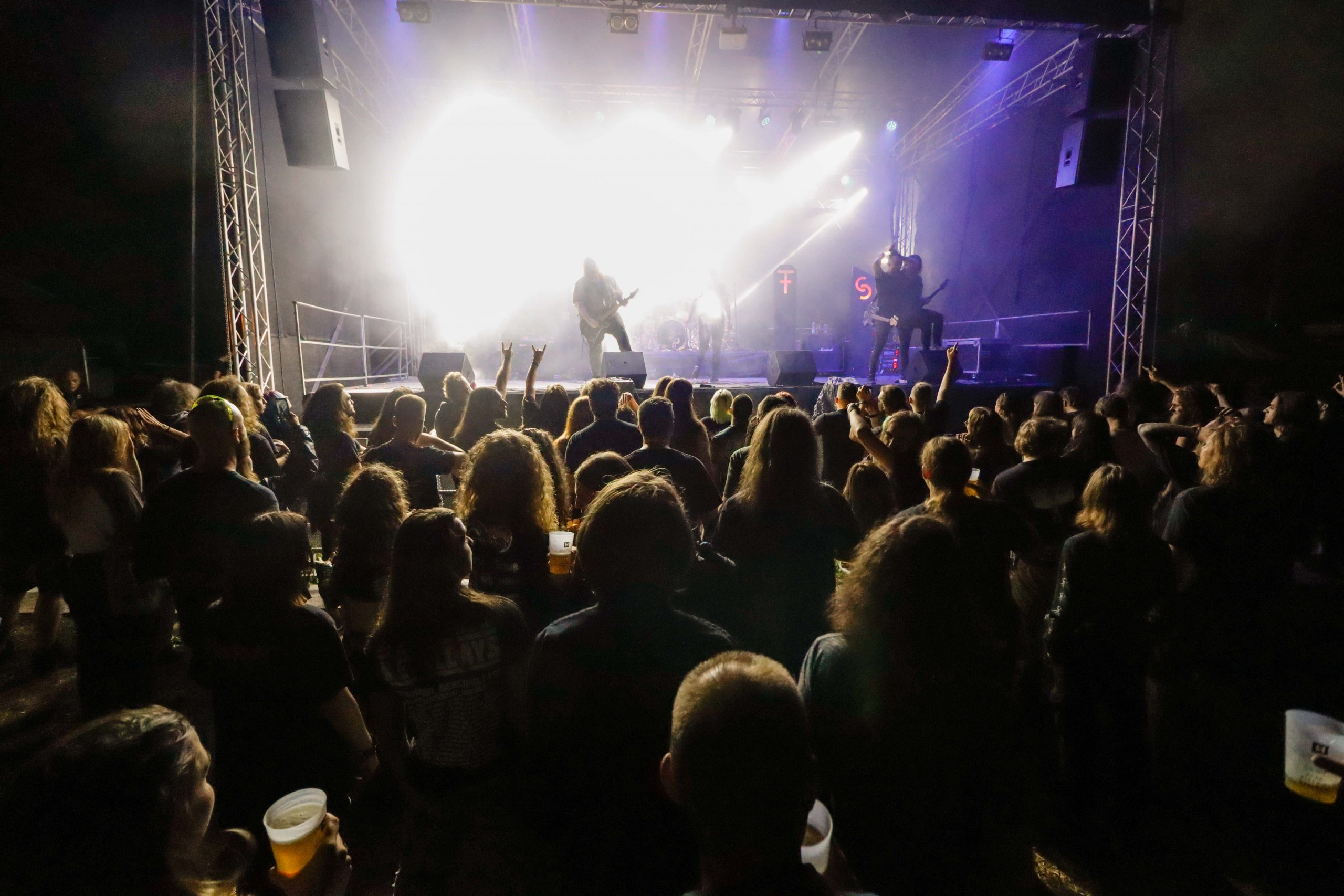