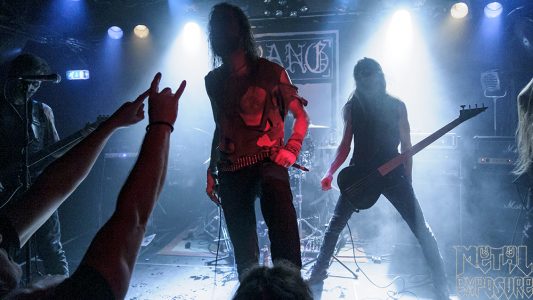 On the 22nd of March 2019, local black metal talent met with Danish masters of traditional melodic black metal Angantyr in the dB in Utrecht. A sold out night, worthy of remembrance. 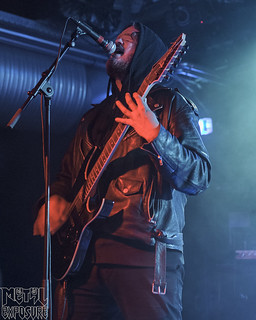 Opening act instead of Myrd, Tetelestai (Utrecht, NL) came with just a bass, a guitar/vocalist and drums. Their eye masks gave them a definitive scary edge, which was augmented with solid, intricate riffing and a high reverbed vocal sound. The drumming made for a rather plodding sound, somehow missing my mark. Perhaps not my favourite of the evening, but definitely worth listening if you like the moodier type of black metal.

Grafjammer (‘Primitive Dutch Necrorock’ as they state it themselves, from Utrecht, NL) is a bit more black and dirty than the description might tell you. As dirty to deserve a ‘not-safe-for-pop-radio’ emblem. It’s rough, Dutch sung, brutal yet with some merry bits of blast beats here and there. The vocals are leaning towards the more understandable side, although you might not notice as you’re being bulldozered out of the way by the voice. The dual riffing work their magic in keeping the music interesting and hell, even danceable.

Wrang, the third band from Utrecht, showed us how to spell Dutch Black Metal. A dirty, melodic concoction of existential hatefulness. Of course, with all that one might expect: plodding marches conquering the domstad under the blackened banner. A blackened banner of madness, in riffing and drumming. But nothing compared to the vocals that swept over the room: a true daemon, let out from the ancient sewers and canals Utrecht is infamous for (as you off course read in your Satanic Planet travelling guide). A tight play and a band to watch (out for). 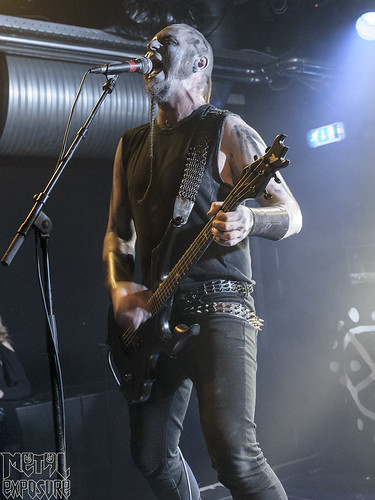 Angantyr, Danish high king of traditional melodic black metal, was next to rule the stage. The 4 stringed guitar wielded by vocalist Ynleborgaz proved that having four fingers is enough to make a sound to rattle the dead. The vocals (only Danish) are ferocious and mean, the wrath of the old pagans truly has found its voice here. The show on stage was one of constant headbanging and incredibly fast riffing by both the frontman and bass player Vrede. This band being my personal favourite of the evening, your truly off course banged merrily along, giving the ol’neck a nice exercise. What a sound, what a show.

Sadly, as the last train home left Utrecht earlier than closing act Myrd played, I had to miss out on this rather brilliant aggressive play, in which the line-up of Angantyr switched vocal duties and entertained the (now less full) venue. 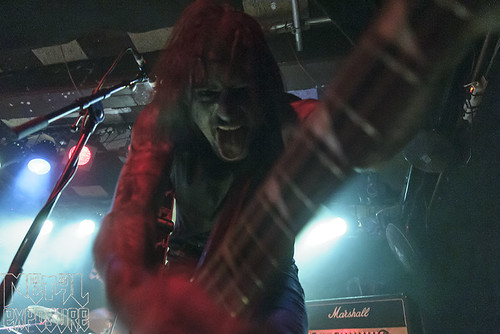