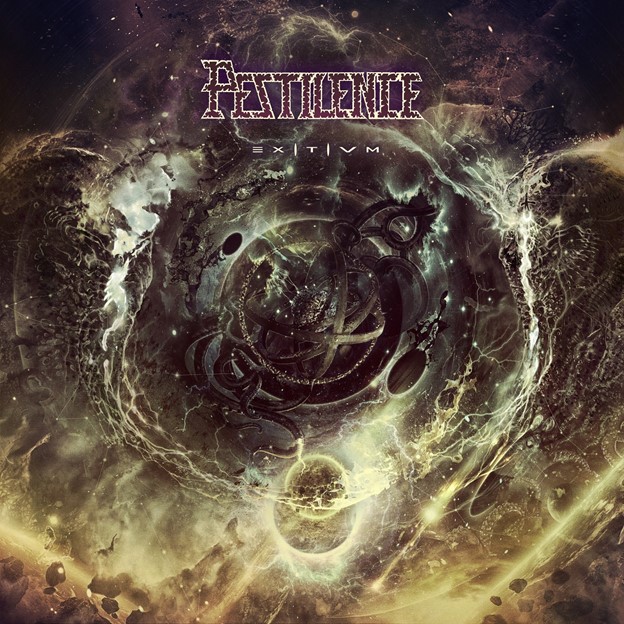 “You can’t teach an old dog new tricks”, so they say. That saying bears weight sometimes and often that can be a good thing when speaking about some of our favorite metal bands. However, this phrase does not quite pertain, at least in its entirety, to legendary Dutch death metalers, Pestilence. With the release of their latest full length, Exitivm, on Agonia Records. Pestilence relies on a mix of tried and true methods that they have implemented throughout their years as well as some new features that help create a more cosmic-mechanical atmosphere for this album. Upon fresh ears, one can hear traditional Pestilence riffing, which can sometimes be purposefully repetitive, fulfilling that sense of bio-mechanism combined with proggy elements and slight oddities which Pestilence tends to do well. Another thing to note on Exitivm is the use of symphonics and samples. These symphonics seem to be added in to complement certain parts and provide more texture in spots that may be a bit bland. The Symphonics certainly do aid the parts that they have been implemented in but they are not in such constant use like bands such as Septic Flesh, Dimmu Borgir or Emperor. Some of the chosen voices for these symphonics are a bit questionable to me but they are not overbearing so they do help in creating that almost futuristic-cosmic progressive atmosphere.

Of the many descriptors that can be used to describe Exitivm, relentless has to be one of them. This album is fast and rarely takes a moment to breathe; hey not complaining here though! For this album Pestilence has called upon the skills of Michiel Van Der Plicht, a fantastic drummer whom as played with some of my favorite Dutch extreme metal bands such as Carach Angren and the mighty God Dethroned. As a drummer, one of the things I really enjoyed on this album was his ability to “stay in the pocket”, even at extremely fast tempos and complicated parts, which is in my opinion, exactly what a lot of the music on Exitivm calls for. With almost an entirely new lineup, founding member Patrick Mameli has been able to hold things together and put out a quality Pestilence album, is it their best? No, not in my opinion, but its interesting to see them combine what they already do well with new things such as the symphonics, which I think could really get interesting down the road if they team up with the right engineer for those type of effects.

Lets also talk about the guitar work on Exitivm. The guitar work is what makes Pestilence who they are in my opinion. Sometimes technical, sometimes repetitive, sometimes with a mechanical vibe, the riffs on this album are good. Not mind blowing, but certainly skillfully played and well placed. On the other hand, the solos on this album were outstanding. Chaotic, wild, futuristic and at other times grand and melodic. Sometimes with some jazz influence, I really enjoyed the solos on this album. Production quality also serves this album well, it is a very clean and polished production, everything is heard as it should be in the mix.

One of my favorite tracks on Exitivm is “Inficiat”. This track is more based around a powerful groove and just feels exponentially heavier than the rest of the album. It’s a really headbanger in Pestilence fashion and has a heavy proggy breakdown in the middle along with an awesome chaotically melodic solo as well. I really, enjoyed this track and wish there were more of this on the album!
All in all, Exitivm is a very solid album with many of the things that I have highlighted above. Its not groundbreaking or moving the band towards a new less desired direction, it’s a safe step in the right direction I would say. If you are a Pestilence fan, you will certainly enjoy this. I am exited to see where they go from here.