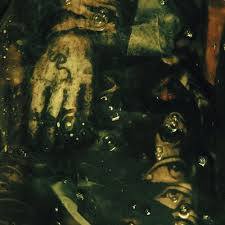 Sometimes reviewing can be very hard. Finding the right words to give you as a reader the right impression is a task on itself. With Oranssi Pazazu this is also the case. Words fall short with this musical endeavour.
This band already has gained cult status with performing at the Roadburn festival in 2017, which has been released as a live album. But lest we not forget: Oranssi Pazazu is active since 2007 and has released several albums and EP’s and found its way to the Nuclear Blast Stable with their latest offspring “Mestarin Kynsi”, which means “claw of the master”. And let this be my first encounter with this Finnish psychedelic black metal act.

I’ve mentioned hard to find the right words didn’t I? I will sure give it a try. Musically it is an enthralling concoction of (vintage) electronics, krautrock, stoner and black metal. Dissonant, avantgarde space metal extravaganza is being offered here. It feels laced with mind expanding drugs and is hard to grasp yet coherent at the same time. This duality, maybe even better said bi-polarity, makes it very intriguing.

The sound is very massive and immersive. Opener “Ilmystis” starts with pounding drums and guitar, but on the background, and later more prominent in the mix, eerie dark keys are entering making it a gloomy, spacious adventure. When the dark and haunting vocals step in it is utter madness presented. Especially when the keys, maybe better said psychedelic effects, are coming forward it seems that you are slowly travelling in another darkened state of mind.
Follow up “Ilmestys” starts rather introspective and has great atmosphere before keyboards and dark vocals step in. Towards the ending the threatening atmosphere builds up with to a two minute during extravaganza of pounding drum, stoner-like riffs and spacey keyboards making the trip complete. “Tyhjyyden sakramentti” and “Uusi teknokratia” are slightly more direct but has the same atmosphere and psychedelic roots as its predecessor while the outer worldly vibe “Oikeamielisten Sali” and “Kuulen ääniä maan alta” mesmerises you with its cacophony of sounds.
Closing track “Taivaan Portti” is a fitting end of this journey and explores a more black metal orientated path without forgetting the hypnotizing and almost never ending loop of maniacal psychedelic atmosphere including chants which is effectively build up towards a climax.

“Mestarin Kynsi” is a bizarre and impressive album at the same time. An adventure on itself. There’s so much to explore that it will take you more than ten spins to grasp the complexity and creativity Oranssi Pazuzu has to offer. It would do more justice to take your time and listen this complex and highly addictive album instead of reading this review. Although Nuclear Blast releases this album it does not show any compromise at all and can only be listened when having an open mind and right mental attitude. A very well executed and performed album which I enjoyed through and through. So If you like music to be unorthodox and adventurous: explore this album you shall.