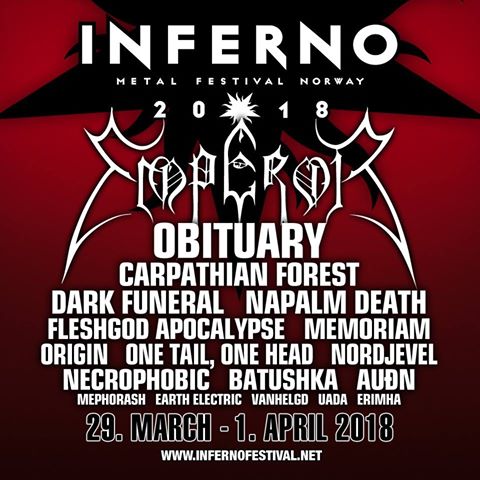 Obituary
Few bands have had bigger impact on death metal than Obituary. Some of the their early masterpieces, like “Slowly We Rot”, “Cause of Death” and “The End Complete”, was genre defining. Still today the band make some of the best death metal albums out there. Just listen to the amazing self-titled new album that was released earlier this year. Obituary has a long history and we have to go all the way back to 1984 when the band started out as Xecutioner in Tampa, Florida. Spawning way for the Tampa death metal scene with their unique brutal sound. Obituary have rarely performed in Norway and we actually have go back to 1994, on the “World Demise Tour”, for the their last Oslo gig. We are proud to bring the pioneers of death metal back
to Oslo and for their very first performance at Inferno Metal Festival.

One Tail, One Head
Norwegian black metal band One Tail, One Head has been around since 2006. The band is a part of the Nidrosian black metal scene. With members from such bands as Mare, Behexen, Vemod and Altaar this band is no stranger to any fans of black metal. On the 24th of August the band will release their brand new 12” vinyl called “FIREBIRDS b/w PROWESS” on Terratur Possessions. Watch out for this band as they always deliver one hell of a live performance.

Audn
Auðn are from the village of Hveragerði in the south of Iceland. The band are known for their haunting melodies and bitterly beautiful atmospheres within the black metal genre. Founded in the bleak winter of 2010, Auðn released their self-titled debut album on Season of Mist in 2014. Last year Auðn conquered Norway and Inferno Metal Festival with an amazing gig. We welcome the Icelanders back for a second round.

Get your ticket to Inferno metal festival here!