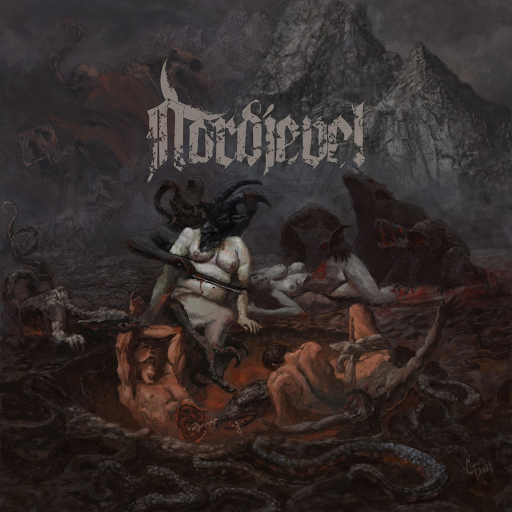 Think you’re fast? The Devil will catch you, before you are even half-way dressed. Think you have some good riffs? The Devil shreds along you just as effortlessly. Which Devil, you wonder? Well, no other than the Northern Reaches’ own Devil –  Nordjevel!

Somewhere in early winter of 2016 I was introduced to Nordjevel’s blasting Norwegian black metal with their self-titled release. Completely enthused with their (albeit predictable) addictive sound, I kept on blasting it.  As with many things however, time passed and my interest in Nordjevel abated. Seeing them live in 2018/2019 didn’t help, as the music had moved on to songs that failed to blip on my radar. Until…until Inferno 2022! They opened for the festival during the warm-night at Salt and really blew me away, with some of the best drumming I heard in a while. All the more reason to see what “Gnavhol” (“rodent hole” in Norwegian) brings in the early fall of 2022.

The song “Of Rats and Men” concerns rodents for sure, although it’s left to the listener which one counts as the pestering type. This was also the turning point in appreciating the album. After the first couple of album spins, it felt like a natural triangle of modern Dark Funeral, “In Sorte Diaboli” era Dimmu Borgir and generic Naglfar. However, after hearing “Of Rats and Men” a bit more, I found the music carrying its own sound, very crisp production and the album getting better with each spin.

The guitar sound is very clean, even though  the riffing is lightning fast. My best guess is this stems from the (very talented death & black metal) guitar work of Destructhor (Thor Anders Myhren). His live performance in Myrkskog still impresses me to this day, so his addition to this release is much appreciated.

Although the song titles are not too inspired (e.g. “Satan’s Manifest” and “Antichrist Flesh”), the drumming is all the more interesting. Perhaps a bit pronounced, the tightness and speed is what makes the album so addictive. Together with the aforementioned riffing, songs like “Within the Eyes” and opener “I Djevelens Skygge” (In the Devil’s Shadow), the drumming sounds really pleasing and refreshing.

A bit more on the epic (Dimmu-esque) side is the title song “Gnavhol,” which opens with long, painful and stretched exclamations of dismay. The song proceeds mid-tempo, although the riffing is still like a machine intended for decapitation. Melodic focus enters parts of the song and the compositional quality of the album is quite discernable from this rather expansive piece. A real gem.

Another gem, although much faster is the melodic and enigmatic sounding “Spores of Gnossis.” Words fail to properly describe the bpms the drummer Dominator (ex-Dark Funeral, live for Myrksog and 1349) must be pounding – suffice it to say it’s pretty yet insane.

Nordjevel puts the meaning of the Devil’s hunts in its music with “Gnavhol” – cold, clean, crips, tight and extremely fast. With this release they have re-entered my playlists and rekindled my interest. Give it a spin, and you might find yourself addicted to it likewise.