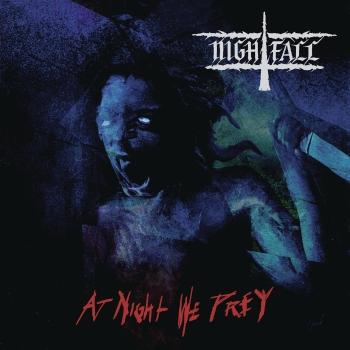 Nightfall is a Symphonic Black Metal hailing all the way from Athens, Greece. Considered as the main influence that brought Black Metal to the Mediterranean region. Nightfall has been tearing up the world with their unique metal style since 1991 and have a lot to show for it. But for this VERY long overdue review I will be focusing on their newest album “At Night We Prey” Released March 5th 2021 VIA Season of Mist!

Overall, this album crushes. It opens up with a beautiful yet full of impending of death and atmospheric keyboard work that flows perfectly into the first song “Killing Moon”. This album has a very ominous feel to it as if being watched and stalked by a demonic force that you cannot stop or control. A perfect mix of fast and aggressive Blackened Death metal. With 10 tracks spanning 46 minutes, it’s almost a flawless album keeping you hooked the whole they through with aggressive blast beats, Guitar Harmonies, Melodic Groove and catchy choruses. I’m not familiar with Nightfall’s past work at all but if it anything like “At night We Prey” this is easily on of the best bands around and actually gives Black Metal a good name.

Without a shadow of doubt this album deserves a 9 out of 10. I’m only docking a point because of the intro to “Martyrs of the Cult of the Dead”. Just too much Cheese for me. Aside from that this album is great and I love it.