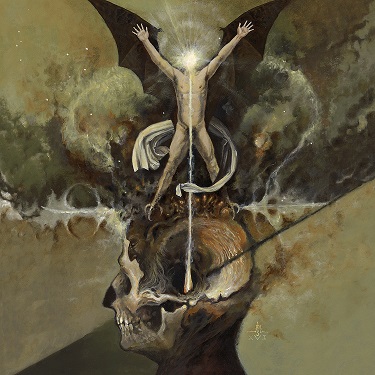 ‘As above, so below’ – an oft heard lyrical expression within metal, originating from the Hermetiscism. Something that has led me to scratch my head many times over. While contemplating Terra Damnata, the new full-length of Nightbringer, I found my personal (engineers’) perspective on this: we build the world as we see (f)it, and the world builds us; literally by yielding clay for brick and indirectly, by hours of sunlight versus darkness. Contradiction, strife yet also co-operation to make, create and be. To celebrate a world that is damned.

Nightbringer is a joint co-operation founded by US but also European artists. Their aristocratic black metal is a musical dimension in its own self. Although heavily founded on the precision and blasting work of Emperors’ In The Nightside Eclipse (editors note below), they have developed into an independent mystical, occult and grand entity with their release Ego Domnius Tuus (2014) and Hierophany of the Open Grave (2011). With Terra Damnata, Nightbringer writes another chapter in their book of successive masterpieces, to be released on the 14th of April (Seasons of Mist – Underground Activists).

If ceremony and ritual are one of the foundations of this band, Nightbringer also show they can do without, on the opening track ‘As Wolves Among the Ruins’. The track is a massive, straight-on kick-in-the-ass piece of fast paced, technical black metal. The layered tapestry of duo-tonal guitar riffs supporting the likewise duo vocals drown a bit in the almost unhuman-like drumming, although this evolves to a more dynamic sound on the rest of the album. A grand opus and hymn to darkness is given in the slower paced ‘Midnight’s Crown’. Likewise less hurried if still manic tonal-riff wise (at first glance) is ‘Of the Key and Crossed Bones’, at which the album seems to take a notch up (or down below?) in atmosphere (and makes the album even better if that’s possible).

A majestic, grand and defining piece is ‘Let Silence be His Sacred Name’. The piano intro, the riffing and thundering drumming (especially at 03:30) combined with screams not unlike those heard on Emperors ‘Towards the Pantheon’ make this my favorite of Terra.

The declaimed lyrics (recorded in the infamous Wewelsbrug castle crypt for its parabolic echo) of ‘Inheritor of a Dying World’ appear to truly damn the world, supported by discordant tones at times. As with ‘Inheritor’, it is too bad no lyrics have been provided in the promo for the ‘The Lamp of Inverse Light’, although the song is one of the most accessible ones with respect to the music.

Terra Damnata hasn’t left my playlist this week, for its majestic, in-human thunderous yet invoking sound. Maybe not as haunting as Ego Dominus Tuus and perhaps too accessible, Terra is produced to a better, cleaner sound (a thing I actually appreciate in black metal). And, as is trademark with Nightbringer: Terra Damnata can be listened to, let go off and revisited time and time again to discover yet new layers and structures. Layers and structures forming a damned world, both below and above.

Editor’s note: An interesting and in-depth (part 1) interview with Nightbringer, done by Bardo Methodology, can be found here.