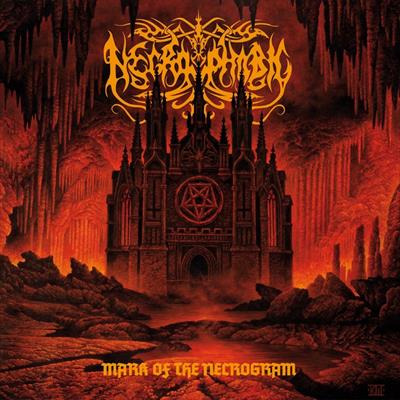 Necrophobic isn’t exactly an unknown name in the extreme metal scene. They’ve been around since the end of the 80s, and successfully amassed a large crowd of devoted fans. On a more personal note, I haven’t always followed Necrophobic’s releases not because they weren’t good enough, but because at a certain point it was hard keeping track, while a lot of their releases somehow managed to slip away amongst a pile of other releases.

After a 4 year period of silence since the last album the Swedes are back with Mark Of The Necrogram, which would be their 8th (!) full length album and it bears some very exciting news. First off, the return of Anders, the marvelous vocalist that plays the part in the band’s The Nocturnal Silence album, to having a mic in his hand. Second, two former guitar players also rejoined, Ramstedt and Bergeback. This wasn’t accomplished just now, and it took the band some years to redefine themselves, but it did happen, and we as listeners reap the fruits of this hardworking line-up.

“Mark Of The Necrogasm” grabs the listener in the head right at the very beginning, starts pounding, and simply doesn’t let go for a duration of almost 5 minutes. Yep, a post 4-minute beat down comprised of fast as fuck drums, hellish screams, and some of the sharpest riffs Necrophobic ever wrote. This isn’t to say that the song doesn’t have any melodic moments, but it is to say that even those moments aren’t what you’d call a recess.

Up next, would be “Odium Caecum” that begins with a light, rounded opener of mixed drum pounds and far-away vocals. It quickly moves to the more apparent style of Necrophobic, where we come upon some very addictive guitar work, that only adds to the overall aggressive output of the band. Similar work could also be found on the groovy (well, sort of) “Tsar Bomba” and “Sacrosanct”.

In between those two, “Lamashtu” brings a bit of a difference to view. Clad with a strong oriental scent, the build up here is filled with toms and an overall song structure that won’t put any Melechesh song to shame, for example. It’s not Sumeria, it’s Stockholm, but hey, it sounds magnificent and it gets the job done.

The new album sounds very, very tight. Not to say that the previous ones weren’t as much, but Mark Of The Necrogasm just feels, well, better. Angrier, more to the point, no fillers required here and no excuses made. Just plain Hellish tunes delivered at a fast pace, as “Crown of Horns” showcases so successfully. Seems like the decision to regroup some of the old band members have been a wise one, since altogether, this kind of end result has been reached.

Unfortunately, the album does fall in numerous moments, due to simply either being a bit too long, or too obvious. There is some variation in playing styles, as “From The Great Above To The Great Below” manages to venture a bit into the fields of melancholy, but more on the lyrical sense, while maintaining a heavy, memorable chorus that sticks long after the song ends, and the album moves to the last track, a relaxed, instrumental piece that seals off the gates of Hell, for now.

All in all, it’s very nice to see Necrophobic heading back to their former selves, and Mark Of The Necrogram is an evil little treat that would surely please fans. It isn’t something that you didn’t hear before, it’s not terribly original, but what it does, it does well enough.