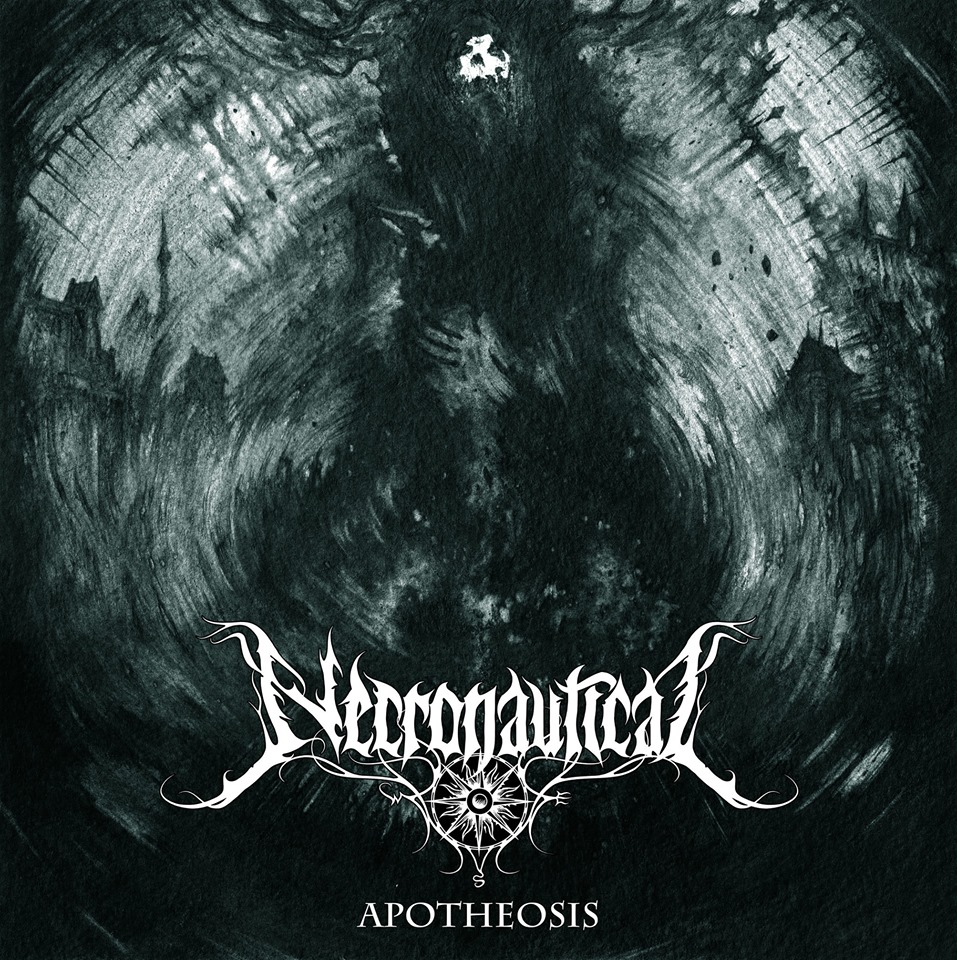 It’s been nearly 10 years since an album of a (extreme / black) symphonic metal band has stuck with yours truly as much as Necronautical recently (Carach Angren’s ‘Death Came Through A Phantom Ship’ probably being the last). Not that there haven’t been decent releases in the genre. On the contrary: the above mentioned, Septicflesh and Fleshgod Apocalypse still rule with a fine array of records. Still, tastes develop, with a preference towards darker, more extreme tunes. Stumbling upon ‘The Endurance at Night’ (released in 2015), by these UK black metallers, made yours truly revisit that earlier drawn conclusion.

Anno 2019, Necronautical are gearing up for the release of their third full length ‘Apotheosis’, out on August 30th. Their efforts haven’t gone unnoticed as the four piece signed with Spinefarm / Candlelight Records not too long ago. Now, will ‘Apotheosis’ be as tenacious as ‘The Endurance of the Night’?

Opening tune, “All Is Vanity” like a couple of other tracks on album (such as “Lure of the Abyss”) seem straightforward at first. However, the more you listen to it, you’ll find that these songs take a bit longer to unfold. The various guitar melodies guarantee dynamic songs, the symphonic elements add extra atmosphere and all of it is drenched in delightful, thick layer of brutality, both especially dominant in drums and (low) guttural vocals.

The first digital single “Nihil Sub Sole Novum,” is one of the easier tracks on the record. The riffs and melodies are quite mellow, yet the drums keep it fierce and aggressive. The choir vocals add to the air of accessibility, but also to the intensity. “Nihil Sub Sole Novum,” is logical choice for a first release and you’ll catch yourself humming along very quickly.

The title track “Apotheosis” ‘ is the absolute crown on the record. It starts slowly, but quickly picks up and builds tension with the riffs to the first half of the track, that boasts groovy, catchy melodies and no lack of blasts. The song drifts off into a calmer area for a bit, focusing on the symphonic in this genre description, thus keeping that bombastic vibe high. Contuining into a guitar driven mid piece, the band gets to show off their skills, after which heavy (metal and orchestral) parts finish off the track. There is no other way then describing the song as an epic journey, leaving you slightly overwhelmed.

The symphonies on “Totentanz” will remind a trained listener a lot of Dimmu Borgir’s ‘Enthrone Darkness Triumphant’ (“Mourning Palace” ya’ll) . It’s a highly enjoyable song and the band manages to stay clear from outright copying by adding their own touch of modern, dissonant riffs and a touch of playfulness that the Norwegians never did.

Is there something not to like about ‘Apotheosis’? It seems like an easy argument, but nevertheless holds a little true. Necronautical are not reinventing the extreme symphonic metal genre. If one should hold that against the band, is something for the listener to decide. The conclusion that yours truly draws is this:

‘Apotheosis’ is an highly enjoyable album of impressive quality and demonstrates varied songwriting. Furthermore, the songs never lose touch with the roots of extreme metal, which is a big plus. If Nectronautical manages to maintain (and down the line improves) this line of work and perhaps pick up a few more live shows on the way, this band’s future will look bright.