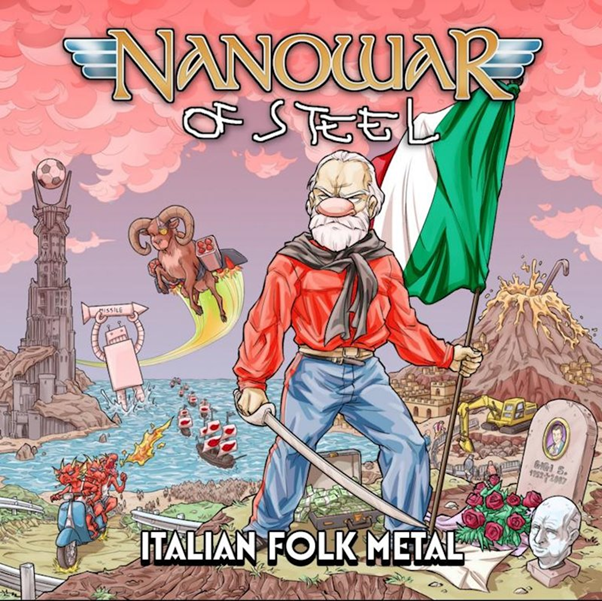 After the massive hits that were “Formia” and “Biancodolce,” Nanowar of Steel is finally releasing their long-awaited pop album. Except it’s sadly full of metal songs? Very disappointing! With this record metal’s most hilarious and clever band takes jabs at their local Italian music, fittingly calling the album ‘Italian Folk Metal.’

You may wonder why I used the word “fittingly” in my intro. This album is quite simply thoroughly Italian. The intro track would fit into a film beautifully with its choirs and classical feel. A wonderful choice given the first proper song is introduced to us by Francesco Paoli, the vocalist of one of the world’s best symphonic death metal bands, Fleshgod Apocalypse. It’s a great mix of FA and Nanowar in which the chorus is very classically Nanowarian (yes, that’s a word now), and the verses take heavy influence from death metal, especially in the very aggressive start. Altogether this creates one of the most complex songs the band has ever done, essentially blending together at least three subgenres of metal and managing to make them work very well.

I’m very much a fan of this entire album being in Italian – except for the two cover songs at the end – however I’m really hoping the band will explain the meaning of the lyrics in some videos after release a bit more. My Italian is just good enough to be able to tell that there are some clever references in there, as they always are when it comes to Nanowar of Steel. “La Marcia su Piazza Grande” is apparently some sort of an ode to Giancarlo Magalli. Why? Who exactly is he? I have no idea. But it’s fun, so why not? It starts with what’s reminiscent of a marching song with cymbals before developing into a more contemporary song – although it still feels somehow dated – after which the album takes another seemingly random turn into “La Mazurka del Vecchio che Guarda i Cantieri.” This has to actually be one of my favourite bits of the album as it does feel very folky with its accordion parts, which I’m going to assume is what typically accompanies the mazurka dance. Adding to the impressive guest list on the album is Alessandro Conti from Luca Turilli’s Rhapsody and Trick of Treat, who adds his vocals to this dancey piece.

If you thought this album is pretty weird so far, consider the next song is a Nordic ode to polenta, which for some reason also features Giorgio Mastrota, an Italian television personality. The song itself is actually super catchy in the chorus, which is probably Nanowar’s attempt to get people yelling the dumbest possible thing at their shows. The riffs are again more classic power metal, which is more familiar to the band as opposed to the earlier folky touch.

The next song – “Scugnizzi of the Land of Fires” – is something I’m certain I’ve heard before somewhere, I just can’t put my finger on it and neither can my friend with whom I’ve spent 30 minutes trying to figure this out. What I’ve realised is that it’s about a dragon being a nuisance in Napoli (as dragons tend to be) and seemingly sung in Napolitano, which is a dialect of Italian. Interestingly, the entire song is sung in this slurred, lazy way, which I’m sure has some sort of a deeper meaning. Otherwise the song is accompanied by really fast guitars and playful rhythms, which again really reminds me of something. But what? If the band happens to read this please tell me why I know this song.

Naturally, the band hasn’t forgotten about a lovely romantic Italian ballad that starts off as a sweet piano piece before getting more into familiar Nanowar waters with singing about raising natality. In the second part there’s a pretty engaging guitar solo and a spoken part. Just when you’re feeling romantic however, you’re hit with some bagpipes and a football anthem. …except it’s Lord of the Rings themed? I’ve stopped trying to make sense of this album at this point and I’m just hoping I see Giorgo Chiellini scream “Mago de sto cazzo, Saruman” in the Euro finals in two weeks.

The album draws to a close with the very catchy “Gabonzo Robot,” which was also one of the singles, and will no doubt be a part of set lists when the band goes on tour. It’s probably one of the most Nanowarian power metal songs on this album with its focus on vocals and the somewhat cheesy keyboards. 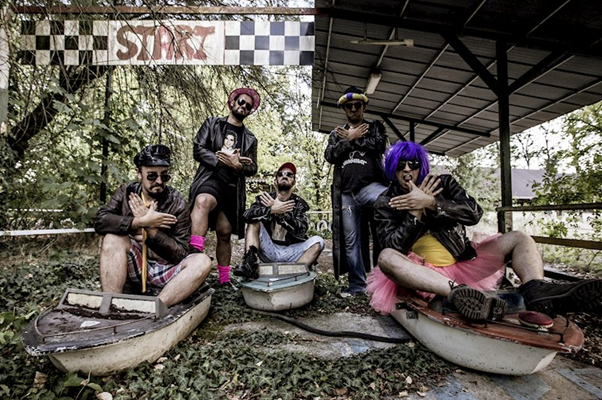 Nanowar of Steel really show how talented they actually are with this album as they cover all sorts of different styles – and all of them convincingly enough that people unfamiliar with Italian music and culture won’t have a clue the songs are full of mockery and parodies. I could easily write twice as much about this album and try to uncover all the profoundly silly references the band has hidden in these songs, but I’ll let that happen naturally for myself and for those of you who’ll listen to this album several times – which you definitely should, especially if you understand Italian or have the patience to look up the translations of the lyrics as the album is definitely full of little gems. Whenever you want to listen to something immensely fun this is one of the albums you can turn to, while also being very solid musically and with its array of folk melodies never boring, but engaging and uplifting. I still want the “unprotected love” song though!