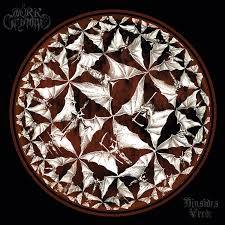 It took fifteen bloody years for Mörk Gryning to conjure another album. After their self-titled album in 2005 this underground band called it quits. And then in 2019 they managed to surprise me with a superb performance at Eindhoven Metal Meeting. And with the news that they were constructing a new black fuelled album I was very curious. And now finally this album has been unleashed upon mankind. So it is time to make a review, isn’t it?

Although this Swedish act has received cult status they never received the respect and attention they deserve. Just listen to “Tusen år har gått”, “Return Fire” and “The Maelstom Chaos” and you will hear that they have delivered some good old fashioned Scandinavian Black Metal. With “Hinsides Vrede” , which means wrath of the world beyond, members Goth Gorgon, Draakh Kimera and the rest of these dark, aggressive yet melodic music makers are back! Now the main question: is it what I have expected?

The answer is no. But that doesn’t mean that they haven’t released a solid album. On contrary, their newest offspring contains a lot of great riffs, melodies and ideas. It is more the fact that it in some songs there’s a lack of own identity, and for me an own identity in music is important. On the other hand twelve songs in 35 minutes should be a quick fix for your black soul.

After the intro “The Depths of Chinnereth” Mörk Gryning bursts loose with “Fältherren” which reminds me a lot of Dissection. Then “Existence of a Dream” follows in the same vein except with some clean singing which is a nice touch. “Infernal” reminds me a lot of Dimmu Borgir, especially the solo. Nevertheless, it is a good song (also because of the fact that I really like DB ;) )!

With “Sleeping in the Embers” and “Without Crown” ,which has some awful clean vocals, the paddle on the metal is held a little back resulting in some great compositions and some well needed breath of air.
Then all hell breaks loose on “Black Spirit”. This song has surprisingly good clean vocals and great guitar riffing resulting in a great track before the outro “On the Elysian Fields” starts.

As said, “Hinsides Vrede” isn’t a bad album. The short, to the point, songs are all great to hear. It is also a very nice touch that the intro, outro and the instrumental song “Hinsides” see to it that you tend to forget my remarks mentioned before. All in all the Morksters managed to deliver a respectable yet short album with edgy, aggressive and melodic fuelled Black Metal madness which is really enjoyable. If you don’t care that some songs sound like other bands you can easily add up an additional point on my score.

I am glad that this band is back and hope to welcome them back in town when this dreadful Covid crisis is over. They certainly deserve a spotlight on the stage were they can present their new songs live.

Tracklist:
1. The Depths of Chinnereth
2. Fältherren
3. Existence in a Dream
4. Infernal
5. A Glimpse of the Sky
6. Hinsides
7. The Night
8. Sleeping in the Embers
9. For Those Departed
10. Without Crown
11. Black Spirit
12. On the Elysian Fields