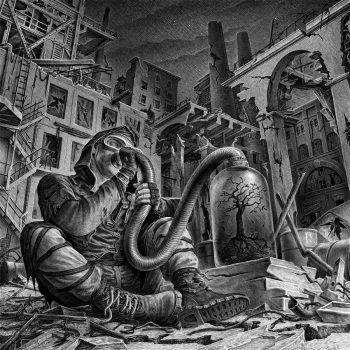 It is without any doubt that the Netherlands, in this case even more specific the region Gelderland, has some pitch black yet fertile ground on which outstanding (Black) metal is created. Meslamtaea is no exception and already has created some excellent albums. This act might even ring any bells since it consists of two members of Asgrauw, namely Floris (all instruments) and Kaos (vocals). Being impressed by their previous spawn “Niets en niemandal” their newest offspring named “Getekend in de Schaduw van het Leven/Drawn in the Shadow of Life” even surpasses its predecessor with a total unique face.

Their style can be characterized as a mixture of styles such as doom, jazz fusion, prog- and psychedelic without forgetting its Black Metal roots. The atmosphere is sporadic uplifting yet contains enough doom and gloom, melancholy, and aggressivity to satisfy the dark souls amongst us. As said, this isn’t a pure Black Metal album. It contains more than meets the eye, or better said ear, but when the Black Metal riffs are flowing the roots of this act are showing.

On Getekend in de Schaduw van het Leven” we are being treated on seven chapters which thematically handles us humans as being a plague on earth, polluting, exploiting and exhausting this once beautiful planet. After a dreamlike guitar intro “Inktzwart/Pitch Black” bursts loose out of your speakers. Aided by the vocals Fraukje van Burg (Doodswens) it sees to it that you are starting recognize that it does not concern an ordinary (Black) Metal album here. Together with the signature vocals of Kaos, well executed guitar parts and the subtle keyboards it sees to it that this song leaves a strong impression. The ambient like outro blends over in second chapter “Ontwricht/Dislocated” which together with “Verdomde Wereld/Damned World” have a more direct approach.

“Illusie/Illusion” is a great experimental song combining the voice of Fraukje, the saxophone of Otto Kokke (Dead Neanderthals). The both of them just add significantly to the atmosphere making it a thrilling ride while not forgetting their Black Metal roots. Job well done!
The outro and maniacal saxophone sound blends over in the intro of “Bitter” were the subtle keyboards accompany the really well and spot on executed riffs. And aided on vocals by Kevin Kentie (Ibex Angel Order) it is a powerful song and a pleasure to listen to. With “Vuilnis/Garbage” the last track sees to it that there is a dramatic end.

It will take you a few spins to grasp this album. And if you delve into the theme of this album it is also food for thought. So, be sure to take your time to digest this album because only then the real splendour on the seven tracks will reveal itself. Please also take a look at the artwork of Maya Kurkhuli because it’s simply great and adds to the atmosphere presented on the music. “Getekend in de Schaduw van het Leven” is a daring, adventurous and challenging album. And since there are only 200 copies on vinyl and some on tape: be quick to get your copy!