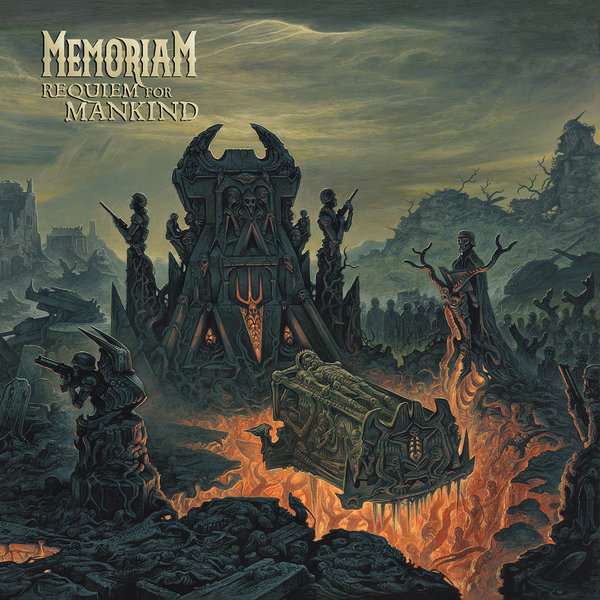 Memoriam was founded on the remnants of the late Bolt Thrower, back in 2016 and it includes members also from Benediction and Sacrilege, to name a couple. It is no lie that the band have been somewhat of a tribute to Bolt Thrower’s drummer, Martin Kearns, but with time grew to become a bigger thing than that.

Previous efforts by the band have been accepted in somewhat mixed feelings, also with me. It’s not that it wasn’t good, it just wasn’t as memorable and powerful like I maybe would’ve wanted it to be.
Some of the feelings involved, I’m guessing, having feeling the need to constantly compare Memoriam to Bolt Thrower (which is, for me, was and forever will be the best band ever) and with my mind not letting go of this issue.

Time has passed, and Memoriam have recently dropped the third full-length album into the wild, and after listening to it over and over, it was clear that Memoriam have created an album that had it’s own two strong legs to stand proud on, and two fists to punch the listener in the belly.

The (old) schooling begins with “Shell Shock”, that presents us the opening of a bomb case without the proper means, as it blasts us with a totally modernity-defying musical path that not only belongs a good few years ago (which is good, duh), but also manages to smack our ears while having Mr. Willetts’s memorable vocals cover all of it like a blanket. “Undefeated” continues in the same footsteps but puts transformations between structures into very good use, when the track moves from fast, to faster, then to a slower, groovy-like rhythm that gives the song even more character.

The English group have dropped the hammer with “Austerity Kills”, that sees the album take a turn into the heavier realm and so does “Refuse To Be Led” that leans more on the classical tune but without letting the listener rest for even a second.

The album hops between songs that are used as a platform for the politically/anti-war lyrics that Karl Willetts is known for. I mean, heck, if one reads the words of “Austerity Kills”, “The Veteran” or “Fixed Bayonets”, one gets a pretty clear idea about what’s the album is all about. All the while, the harsh tunes accompany the harsh words and emboss the atmosphere even more.

Memoriam’s new effort may not be the hardest album to digest musically, but it’s the album that really puts their banner on the map because of this effort and nothing else, fair and square.

Tracklist:
1. Shell Shock
2. Undefeated
3. Never The Victim
4. Austerity Kills
5. In The Midst Of Desolation
6. Refuse To Be Led
7. The Veteran
8. Requiem For Mankind
9. Fixed Bayonets
10. Interment