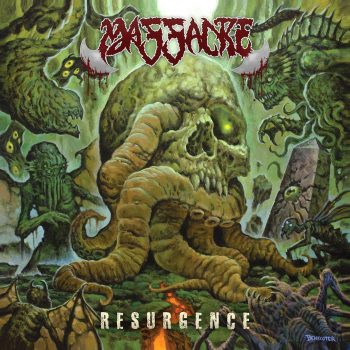 I have never listened to Massacre but was aware of their origins in the Florida Death Metal scene from its infancy. The first thing that jumped out at me was that absolutely beautiful guitar tone, the chugs and singiness in the chords and tremolo riffs is sublime. The drums aren’t exactly the fastest or most technical but deliver exactly what the song needs. The vocals are unique yet fairly understandable and fit into its own death metal niche when a niche in death metal is extremely rare.

That is unfortunately the issue with this album, it is incredibly unoriginal and doesn’t offer too much to the already vast repertoire of Floridian style Death Metal. There is an obvious comfort zone of riffs and ideas that don’t deviate immensely from one another and there were even some parts, like the beginning of The Whisperer in the Darkness that sounded like recycled riffs from other bands. The first riff in that particular song is almost a complete cover of the bridge from Kreator‘s Pleasure to Kill. The lyrics touching on familiar themes as well, lovecraft, horror fantasy, gore, etc. Does this take away from the enjoyment of the album though?

Absolutely not, granted I can probably swing a dead squirrel and hit a band sounding exactly like this in my home town but I can hardly ever get tired of it. Despite the unoriginality, I was headbanging along to this album the entire listen. When that first thrash beat underneath those melodic tremolo’s in Eldritch Prophecy kicked in I knew I was hooked and I was not wrong. Resurgence is a taste of familiarity that validates the phrase “if it ain’t broke…” Listening was like opening a good beer, kicking back, and watching a good old, nostalgic tv show.

If you’re looking for something groundbreaking and fresh, it is best to look elsewhere. But if you are looking for a good time and just some old fashioned Floridian Death Metal, crack open a brew and crank up Resurgence.

1. Eldritch Prophecy
2. Ruins of R’Lyeh
3. Innsmouth Strain
4. Whisperer in Darkness
5. Book of the Dead
6. Into the Far-Off Void
7. Servants of Discord
8. Fate of the Elder Gods
9. Spawn of the Succubus
10. Return of the Corpse Grinder