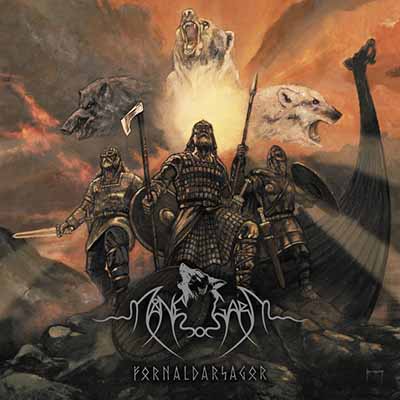 Månegarm have always been a key name in the Pagan/Folk Metal world. One reason is the sheer fact that they’ve been around since 1995 (which positions them basically as one of the pioneering bands) and the second is that they’ve managed to on one hand keep the core of fans loyal throughout the years, by manipulating their music that on one hand sounds familiar so many times, yet changes more often than not.
It wasn’t always all happy an nice, though, as after Nattväsen (2009), the band took some turns and created a couple of albums that felt a bit less powerful than previous works and thus, were mostly accepted with mixed feelings both with the crowd, and with the press.
The 4-year break since then, saw the band going through some lineup changes (mainly that Jonas, one of the founding members, have left due to personal issues) and a strong will to create once more, powerful tunes. And so, we land in 2019, that sees the release of Fornaldarsagor and with it, a new wind for Månegarm fans worldwide.

The new album opens up with “Sveablotet” that first and foremost greets the fans with a scruffy riff that turns into an all-out attack of speed and aggressive drum work, layered with melodies and rough chorus vocals that veteran fans know and love, and that the instrumental part in it, combined with the harsh momentum that drives itself into one’s ear straight after it, is some of the moments we all missed.
The gas pedal is being stuck to the floor with “Hervors Arv”, with its Thrashy foundations and relentless rolling of severed heads with a structure that goes back in time, and sounds like it came straight out of the band’s early materials, which is also the case with “Slaget vid Bråvalla” and I have to say, it’s a damn pleasure to hear how the Swedish bunch goes back in time.

It’s also a nice bonus, to see that unlike the group’s last few efforts, they went back to all-Swedish lyrics. It was fine to have Månegarm material in English, but after years of songs sang in the band’s native language, it felt misplaced and a little awkward.
The album contains some of the grooviest (if that’s even a word) tunes that Månegarm ever written, as “Spjutbädden” exemplifies, while in other tracks in the album, the band seems to be less and less afraid to, on one hand, experiment more with quieter harmonies that connect the more brutal parts in songs, yet on the other hand, bring into action more classical instruments and abilities (violin, female vocals) that add that spiced up Folkish momentum the Swedes are famous for.
Sometimes, even stretching it into whole songs (“Dödskvädet”) without sounding too tiring.
As a homage to Motörhead/Lemmy, the band decided to include a cover for “(Don’t Need) Religion” by the almighty Englanders. Brilliantly executed as a personal take on the classic song, laden with Erik’s raspy vocals, while laying out a Folk influences and harsher, heavier Bass work, to infuse with the regular riff that drives the song forward.
Månegarm are back, and with Fornaldarsagor, they’re ready to stand once more as one of the top Folk/Black Metal bands out there. It would please veteran listeners, such as yours truly, and newer fans alike.