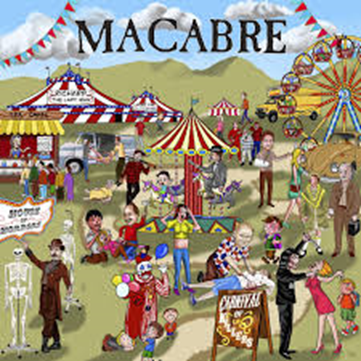 Serial killers? Did someone say serial killers? If you like grizzly (true) stories murder, torture, cannibalism, necrophilia with a side of comedic relief then Chicago Illinois’ (US) Macabre have a treat for you! Thoughtfully branded “Murder Metal” Macabre has built their reputation on telling horrific, yet interesting, stories of some of the most heinous and deprived acts committed by murderers and serial killers; and sometimes they do it in light-hearted ways. Other than the serial killer or murder metal theme, you just never truly know what to expect when you hear that Macabre is releasing a new album and their latest full-length, Carnival of Killers, is a prime example of that unknown.

Macabre is a band that combines various elements of grindcore, thrash, punk, death metal and well, what ever they feel fits the certain theme of that song. Diversely, on Carnival of Killers they have expanded even more on the psychotic ways that they oblige the listener into learning about their favorite killers. Some of the things you will hear on this album are traditional nursery rhymes (modified to Murder Metal standards of course) Central American style country and western vibes, foreign languages, spoken words and even blast beats! I cannot emphasize enough that every track on this album is different from the previous track and out of 16 tracks, that is a ton of content to decipher and lends a hand towards how creative this trio truly is.

Carnival of Killers starts off with a brief circus/carnival themed introduction and then track two goes right for the throat. Track two known as “Your Window is Open”, is a true straight forward facemelter and for me, this is traditional Macabre. Fast, to the point, violent with those ever so atypical yet lovable whinny shrieks that front man and guitarist Corporate Death is known for. One of the things that I love the most about Macabre is their ability to incorporate humor into their work which I would think one would need due to undoubtedly large amount of research that they have to perform in order to write so many songs about serial killers. They literally have a song entitled “Stinky”, about a family bar-b-que at John Wayne Gacy’s residence with some horrendous stench radiating from his basement, wonder what that smell was?

One very important thing to note, in light of all of the comedic relief that Macabre has to offer, these guys are serious players and highly talented. In fact, I would say that drummer Dennis The Menace, is one of the most underrated drummers of all time in the genre of heavy metal. Dennis absolutely kills it; fast feet, extremely precise, blast beats and great levels of creativity. The drum tone on this album is wonderful also, very punchy and stands out well in the mix but still very natural and you can tell that what you are hearing is in fact being played by Dennis. Similar to the qualities of the drum mix, the bass and guitar tones sound very organic on this album, just gritty enough but not over polished. Some of the leads and solos sounded extremely epic, Corporate Death can certainly shred while Nefarious hangs right with him on the riffs with extremely clean and audible bass playing while providing backing vocals.

Carnival of Killers may go down as one of the most interesting albums of 2020, especially to those whom have not experienced the psychotic facemelter that is Macabre before. I was certainly impressed by their abilities as well as creativity on this one but I am also aware that this is a niche demographic. If you ever get a chance to see them live, do it. When I was 17 years old in 2007 I was lucky enough to witness Macabre live for the first time, they are amazing live performers. I guarantee it will be a performance you will remember forever. Still, Murder Metal.