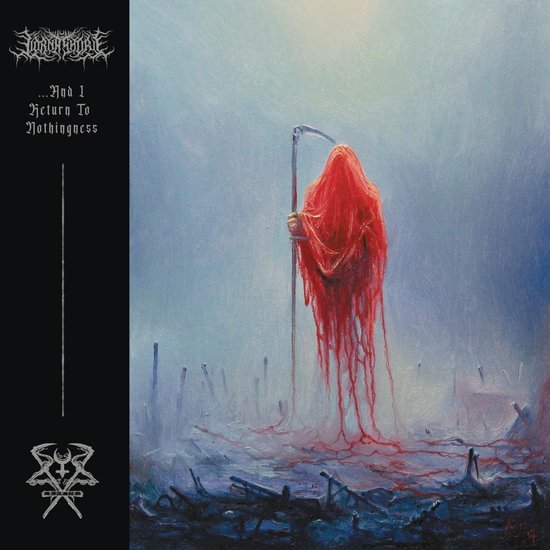 At the risk of sounding like an old fart, Deathcore is not my preferred metal subgenre in the slightest. There are a handfull of bands in the genre I do greatly enjoy, but the vast majority are not my thing. Nevertheless, I was a bit anxious to give this EP a listen to. I was vaguely familiar with Lorna Shore but this EP has been my first actual dive into their material.

Track one, I Return to Nothingness is an incredible start. Operatic strings and keys dance around similar to a European or Japanese Power Metal intro and dives into an absolutely stunning verse. Riffs galore, harsh vocals hitting every range you can think of. The only issue I have with this first track is the mix is all over the place, but it only lasts for this first song. The keys, which are just hitting atmospheric whole notes, are right up front while the vocals and glorious guitars that are playing these masterful runs and licks are buried way in the back. I’m not sure why this is happening especially because the rest of the mix is very good and modern. The title track is easily my personal favorite, plenty of melody while retaining its harshness, something I always look for and which Lorna Shore does beautifully here.

The second track, Of the Abyss is fairly similar to the first in the beginning. The mix issue has either been resolved or I’ve gotten used to it at this point. More fantastic riffage, orchestral elements complimenting beautifully, and the vocalist destroys. Now this is where I turn into an old fart and can’t hang with the youngin’s; breakdowns.
Several of my favorite bands incorporate breakdowns, don’t get me wrong, but they are usually of the groovey sort and for the most part serve a purpose and make sense in the context of the song. The breakdown in Of the Abyss starts out very interesting, it foreshadows and teases its way closer and closer until it stops and provides tension, not bad. Although when it hits, it never feels like it actually starts and turns into a very dissonate, visceral section which I understand is sometimes the point and what fans
of this genre may be into, but it has no real groove to it. It slows down a bit too much compared to the rest of the song, to the point where when it ends and the chorus just comes chiming back in at the normal tempo, its almost like the entire section never happened. Despite a masterful buildup, it felt entirely disconnected from the rest of the song.

Track three, To the Hellfire is a great finisher and the “meat” of the song is fantastic like the other two. The blast beat sections in this and Of the Abyss made the hair on my arms stand up and were absolutely outstanding. The techy, melodic riffing still persists, and the breakdowns here fit at least a little bit more than the previous, but are more in quantity which still broke up the momentum of the song. They were easier to listen to, had a bit more groove, but the outro had the same issue I had with the one in Of the Abyss. There is something to admire about making a section as disgusting and slimey as possible, and the vocalist’s inhuman wailing and snarling is a wonder to behold, but I found myself feeling disconnected to the rest of the piece once again after it was over, which as an outro might be its intent.

Despite the aspects of Deathcore that don’t speak to me, And I Return to Nothingness is highly recommended. Someone who appreciates techy, hooky, death metal-style riffing with insane vocals and gorgeous orchestral backdrops will find this EP enjoyable. For those that like that along with deathcore elements, they would probably enjoy this release even more so.

Tracklist:
1. And I Return to Nothingness
2. Of the Abyss
3. To the Hellfire