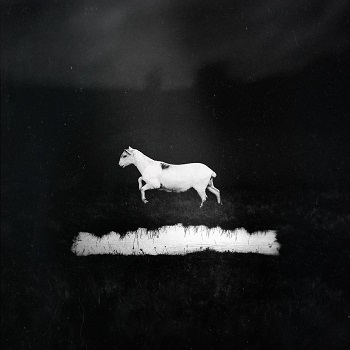 Released on April 21st, Les Discrets (Lyon, France) released their third full-length album, Predateurs. Although very much on the edge (or actually over) of what I consider metal, the experience I had when watching them on Prophecy Fest 2016 was enough for me to pique my interest in their music. Predateurs is an aesthetically pleasing, beautiful piece of art – if a bit on the radical side.

One may argue whether or not this album can be counted as metal. Granted, I would count their previous works (Septembre et Ses Dernières Pensées (2010), Ariettes oubliées… (2012)) as post-black/shoegaze, much down the same ‘avenue’ as Alcest. The latter they’ve even shared (live) musicians back and forth with (Neige, Winterhalter), as well as with Amoeseurs, for which Fursy Teyssier was (bass) guitarist. Predateurs, however, is entirely made by Audrey Hadorn (lyrics, vocals) and Fursy Teyssier (all music, vocals and (album) art) and is a clear change from their past music.

The direct message of Predateurs is revealed on the likewise titled opening track, with the opening part of the speech by the Australian former banker and philanthropist Philip Wollen, ‘Animals should be off the menu’. As he has a way with words that poetically conveys a very cynical and confronting message, the intro is chosen very aptly for the album. If still dreamy, layered and oft mesmerizing, the tempo and drums have gone down quite a bit on Predateurs, compared to their older material. Or they have vanished all together, making room for only minimalistic percussion on Fleur Des Murailles (Flower of the Wall, lyrics taken from Je Respire Ou Tu Palpates by Victor Hugo).

A lot of metal music derives (at least some) inspiration and finds intrinsic resonance from Romantic literature and art. Albeit in a modern form, escapism is on Romantic trait clearly found in for instance (our metalized) Asatru and other paganistic, (pre/non)-Christian interests, rituals and sometimes even worship. The German term Weltschmerz in another, describing a nigh-on unbearable pain for the cruel physical world not living upto our mental and meta-physical projected wishes for it. Weltschmerz has a French counter-part: Mal de siècle. This element is key in Predateurs, as it revolves around suffering and a world that is doomed for its cruelty. Man is cruel against one another and cruel against animals, whom are bereft of a voice. Or, put in words published by Les Discrets, quoted as a tagline for Le Reproche: “Man is a predator, he consumes and rarely gives back.”

(The Reproach, a poem Henri de Régnier) is a song I keep coming back to, for it is one of the few songs with a guitar tuning more pleasing to my (metal biased) ears, and is reminiscent of the older material of Les Discrets. The other songs can mostly be described as post-rock or in their own words, Cinematographic Indie-Post Rock. The fluid melody lines, dreamy undertones and the beautifully sung clean (often dual voiced) vocals…the album has a quality and feel that kept me listening in wonder and admiration, although this definitely not my favorite genre.

If you like Alcest, Empyrium, Lantlôs or Falloch, you must have heard of Les Discrets by now. If not, this is a good moment to start listening. Although I would opt for a more holistic or dualistic and strife driven view (both musically and political-worldview wise, as the very same mal de siècle is actually what made this album into such a beautiful piece and animal rights are much more in focus than say, 20 years ago), Predateurs is a beautiful piece of art from the multitalented minds at Les Discrets.