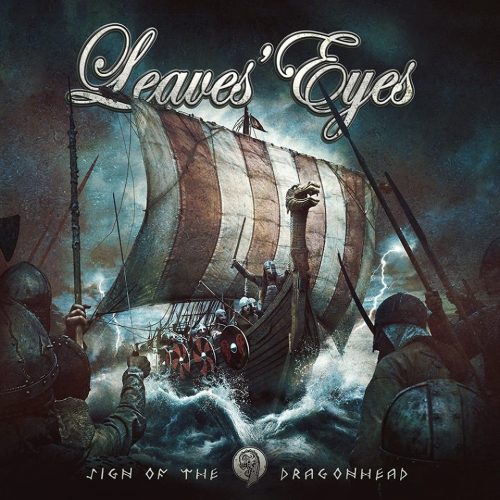 It seems to become a common phrase in my recent album reviews; line-up changes. The same goes for Leaves’ Eyes and this one is a biggie. Former singer Liv Kristine has left the band and has been replaced by Elina Siirala. Naturally this leaves an impact on the sound of the band.

Of course, a band is not defined by only one musician, and the same goes for Leaves’ Eyes. As of late, the male grunts from Alexander Krull have been more present in their albums, and the same goes for Sign of the Dragonhead. I must say, this gives the band just that little bit more of an edge. And to be honest, this is also what Leaves’ Eyes needs on the new album, because the lead vocals are good, but nothing out of the ordinary.

While listening to Sign of the Dragonhead, you can sense that the band is still searching for their own twist in the music, their own vibe. Naturally, this will take some time, but it also brings forth some variety in the songs. More than ever, we get to hear different folk influences in both upbeat songs as well as calm, soothing ballads. One of the most catchy songs on the album, which can easily get stuck in your head, is “Riders of the Wind“. On this track, the band is supported by a choir, which gives it a little bit more dimension. But maybe the most impressive track is the over eight minute long epos “Waves of Euphoria“, which feels like a typical old school Leaves’ Eyes track (be it with heavier grunts) and on which Elina does a great job.

Still, Sign of the Dragonhead won’t go into the books as the best Leaves’ Eyes record. The band still needs to find its way with this line-up change, which is only logical. If they can find a balance in the grunts, Elina’s voice and the folk influences, I’m sure the next record will be quite impressive.