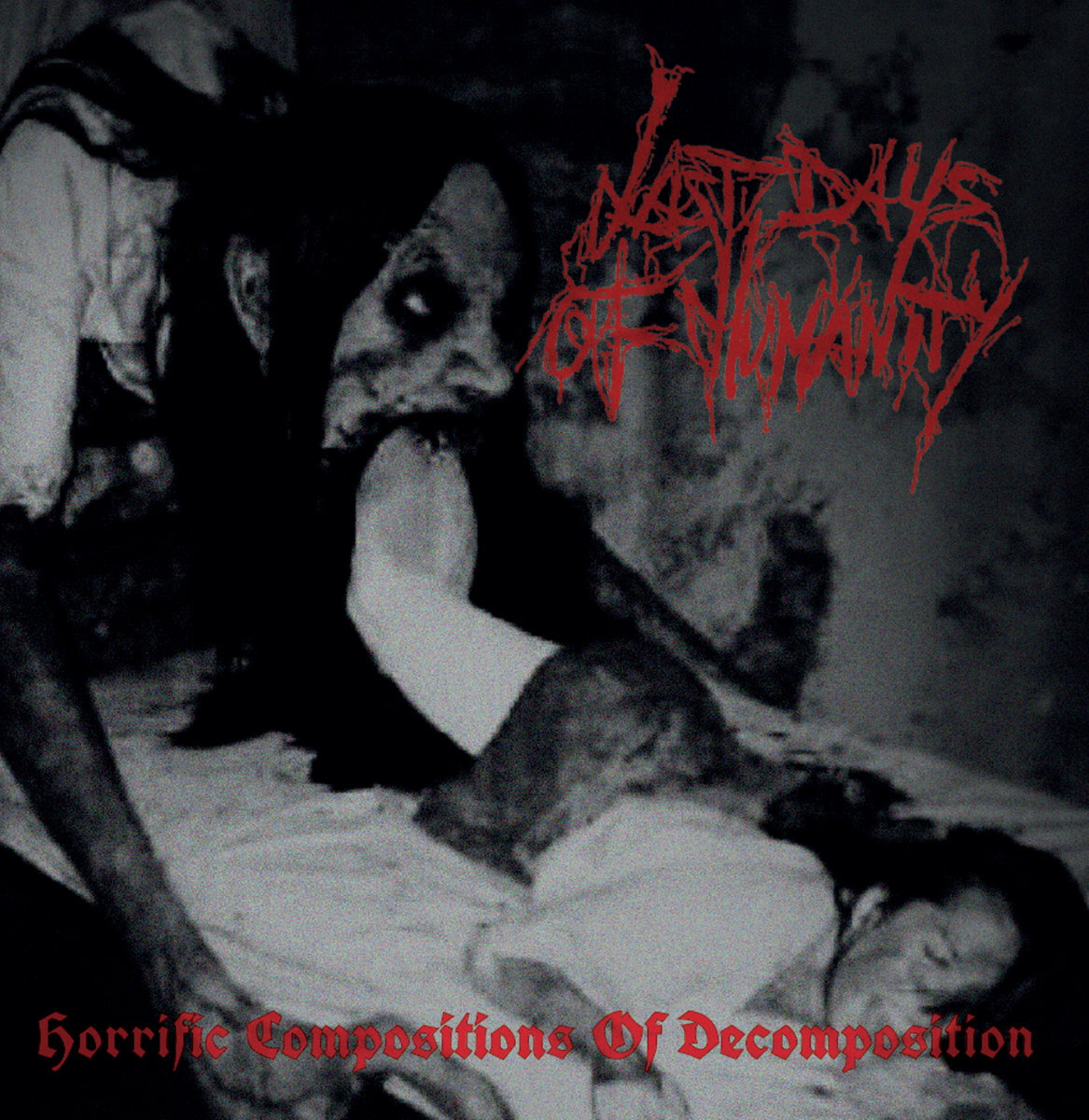 Before reading this review please be warned: I am quite biased when it concerns Last Days Of Humanity.
Reasons are quite simple. I grew up with, become acquainted and even befriended with some of the lads from this cult Grind Gore act. So now that this is out in the open I can tell you that with Horrific Compositions of Decomposition they have finally returned with a full album after a hiatus of approx.. fifteen years. They have released a few split EP’s but since Putrefaction in Progress (2006) the wait is finally over…..and once again LDOH doesn’t disappoint at all.

What surprises me most is the small alterations in their musical approach this time. Just watch the cover and it might give you a small hint……this album is a little out of the box, and maybe that’s the reason that I have listened this gem for many, many times since I have obtained this disc. Add the fact that the 33 songs are short, yet fuelled with hell and destruction and swamped with really cool samples and you have a dish served of my liking. Of course Hans Smit‘s superb trademark growl is present, but combine it with some really cool samples and it immediately grabs you by the throat and rips you apart…shred by shred.

On certain songs LDOH tones a little bit down in tempo making the faster songs pack an even bigger punch.
Just listen to Fusing Symblepharon were you can first grasp the atmosphere before the track is going haywire. Especially the riffs of guitar/bass rapist Bas van Geffen are super cool. It seems the riffs are flowing a little. Just like a wine: let it breath and then taste whether it is a good wine or just simply over valued vinegar…if you grasp what I mean.

Although there is plenty of gore presented some themes used are really cool. With Principles of Pathology, a sample of serial killer is used. This makes sure that it will keep your eardrums tightened and is a very cle(a)ver touch. It gives a small peak in a serial killer’s fucked up mind; but besides this track there still are more than enough traditional Gore Grind tracks presented. For that you can simply read the different titles of the tracks on this album and you will find out yourself. Especially the small steps outside of the band’s and genres boundaries make it extra special and interesting. With lack of better words ….it simply sounds fresh (perhaps rotten is a better word ;)).

The shift of pace, fast and slow, together with some really cool topics makes this album really worth while checking out. Of course both Bas, Hans and Paul (drums) are experienced music makers and know how to make exhilarating music but in this cause they have surprised me with making a really cool, dark and gore filled album which continues to be exhilarating without forgetting its roots.

It’s about twenty years that I have seen these bastards live….so let’s hope I get a chance real soon after we have dealt with the plague of this era. And with this album in their pockets let’s hope they play a lot of songs from this album because I can’t wait hearing tracks of this album being executed live. I can only conclude that these sympathetic lads made another great contribution on their already excellent and extended discography. If you know the genre you can simply add this piece of filthy work to your collection.
Job well done guys. Keep the juices pumpin’ and don’t let me wait this long on another album will ‘ya?