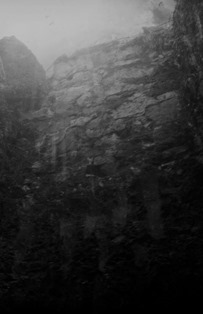 About a year ago I reviewed Triumph, Genus “Po vrhu vždy je prázdno kolébek” album which scored quite high with its 7,5 points. Although clouded in mystery the main act of the members of this band hailing from Czcehis is Kult Ofenzivy. Already active since 2007 and heaving already released four full length albums and a compilation album number five “Tak jsem Ji přizval k sobě” was released as a limited cassette and sold out quickly. Now New Era Productions releases this album on compact disc in order to gain a larger audience.

Deservedly so since this album is short with its twenty-seven minutes but quite intense. With references such as Maniac Butcher, Darkthrone, Mayhem and Clandestine Blaze you might get a solid impression of what this Black Metal is all about. Low tuned psychedelic black metal is presented here. Dreadful and gloomy shizzle which infects your ear with its dark poison.

Five evil, lengthy gloomy songs are being presented here. No new original approach or fun themes. Just plain darkness which leaves a sour taste in your mouth. No effort has been made to provide a shitload of lyrics and vocals. I wouldn’t understand it anyway since I do not understand the language hehe. But on this album it is the music, the pure essence, that counts. These guys certainly are no fan of humanity….and the music reflects it, malignant in its purest form.

Low fi production just like presented in the nineties is being offered here. And I like it. If you like music which is quite stripped down to the core and like the above mentioned acts, as well as Triumph, Genus, give this a go. It might take you a few spins in order to grasp the rawness of this album but when it does “Tak jsem Ji přizval k sobě” is something worthwhile.
If you want music to be sophisticated, leave this album be. If you want music down to the essence and dark and raw: try this one out. And let the misanthrope consume you.