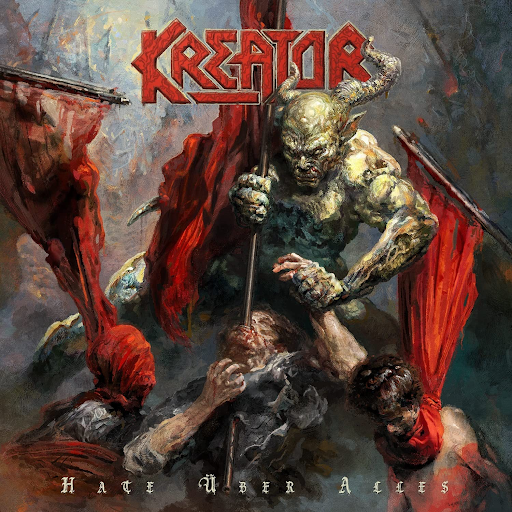 I have to be honest and say that I basically don’t listen to thrash metal, but I’ll be seeing Kreator in a few months and it’s about time I check out a bit more what they sound like (plus my boss made me do this review, but don’t tell her I said that). The German thrash legends are celebrating their 40th anniversary this year, and that is, let me tell you in a very eloquent manner, a lot of years. Despite all those years, Kreator are back with an album they titled “Hate über alles,” five years after their previous release “Gods of Violence.”

The album starts with a bewildering opener titled “Sergio Corbucci Is Dead” – which he definitely is, yeah, has been since 1990 actually. Maybe the grieving process for the band has been a bit lengthier than expected, but after this brief intro we’re treated to a song I actually really enjoy and that is the titular track of the album – “Hate über alles.” Bands have a tendency to soften with age but this track really goes for it with its energy and a strong anti-hate message despite its ironic title. Petrozza opens with a really powerful scream and the song itself is extremely energetic and speedy but with a modern mix on it that makes it sound really great. I love the – possibly unintended – way of the chorus sounding as if it’s actually saying “hate is a virus” and thus giving it a double meaning.

Some anti-religious messages are always welcome if you ask me and Kreator offers us “Killer of Jesus.”  Now, I’m unclear if they’re saying one of them killed Jesus personally, but I’ll celebrate his death either way. The track is, again, fun and powerful, even if it’s pretty standard thrash metal. It has a rather chant-able section in the middle and I would love to see an entire crowd yelling “Killer, killer.” Some standard thrash metal guitar wankery is added, of course, and I’m not unhappy about it.

In true thrash metal (and punk!) fashion we have a syc semper tyrannis type song that begins with a marching tempo, adding to the atmosphere of a crowd fighting the tyrants. Sadly, the chorus itself feels a bit weaker to its preceding songs and that’s kind of the feeling with this album overall. It opens strongly and then waivers and it becomes quite apparent that the tracks are written in the same manner – that is to say they often have a chorus, which is just repeating the same phrase several types. Rhythmically and energetically, but still. Not very inspired.

“Strongest of the Strong” is another single that was pre-released from the album and it’s another song the band’s longterm fans will probably really enjoy. It has fun guitar shredding that verges on being a bit of a show-off, but I suppose that’s just what Kreator does. The drums keep a nice pounding rhythm throughout the album as well, and it’s really hard to actually find any faults with the band’s performance on this record, yet as it goes on it more often feels like there’s a decent amount of filler material.

“Midnight Sun” does have a cool addition in the form of female vocals from Sofia Portanet – they’re mixed somewhat echoey but it’s not off-putting and I think it works rather well. Petrozza’s vocals are also less harsh in the chorus, perhaps to complement her style better. The more I hear this the more I actually like their voices together while the guitars and drums are going full force in the background.

Finally, the Germans end the album with two more pensive tracks, “Pride Comes Before the Fall” and “Dying Planet,” especially the latter which clocks in at almost seven minutes and I reckon that’s some sort of a record for thrash metal. It’s quite refreshing to end on a song with a bit of a different song structure (it’s not exactly prog though) and an important message.

“Hate über alles” is certainly not a poor release, and I think I enjoy it more than I expected it to. In their 40th year as a band Kreator don’t have any more points to prove, but they did prove anyway that they’re still a very relevant band as well as a band that can still make a solid album and not just release some nonsense in order to appease its fans, something that quite a few bigger bands are guilty of at times. Of course, the album has an issue with unoriginal songwriting overall, but I doubt any Kreator fans are expecting anything particularly different from each song on the record and therefore this is an album that, while not spectacular, should make a lot people rather happy.