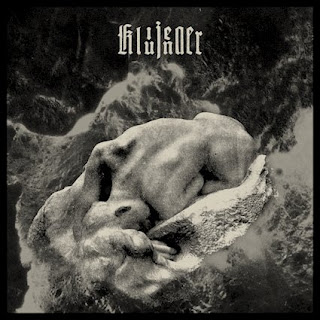 Looking at the name of this band you might think that Kluizenaer (Hermit) comes from the Netherlands. Nothing is further from the truth since they come from Potsdam/Brandenburg, which is in fact Germany. With a full-length “Radbraak” and three EP’s already to their name, they now present “Ein Abbild der Leere” (A Picture of The Void) where they unleash a furious mix of black metal, doom, ambient and noise.

The album starts rather slow with an ambient tune on the track “Verewigung.” But slow, yet constant guitar riffs seep in before bursting into an eleven minute epos where desolate aggressiveness and doomy patterns collide. Same goes for “Es verbrennt sich.” “Oelgoetze” is a dark piece of ambient work with female vocals from Osfyn that really creates a moody atmosphere before the sample of  the last track “Stylit” begins and a fourteen-minute long maniacal piece of metal manages to make an chaotic entrance out of my speakers. Luckily, the mid-section gives you some time for a breather and gradually creates momentum in aggressiveness again before ending in ambient splendor. The bipolar, aggressive outbursts and dark ambient parts make this track and album a real adventure.

It took a while to grasp the full quality of this album. Especially the maniacal chaotic sound is the reason. But I must admit: the production is spot on and gives each instrument and music part the  space to show its qualities.  It will definitely take a few spins in order to get really acquainted with this album. But when you do, this album does not let go and creates an unique and unorthodox ride.  A twisted ride, which crushes the earth beneath your feet.

Although this album only has four tracks up its sleeve, the duration is almost forty minutes. Forty minutes of well-balanced chaos, darkness and dark ambient. This music is a niche and pushes boundaries on music in a twisted and even sometimes terrifying manner. A niche that bands such  as Nihill, Dodecahedron and others have treated each in its own way. The music is complex and the layers in their sound make it both enthralling yet not a quickly digested piece of work. As said before, it will take some time but the time you take to delve into this piece of art is well worth it.  If you like music to be intense and unorthodox, Kluizenaer is definitely worth checking out.