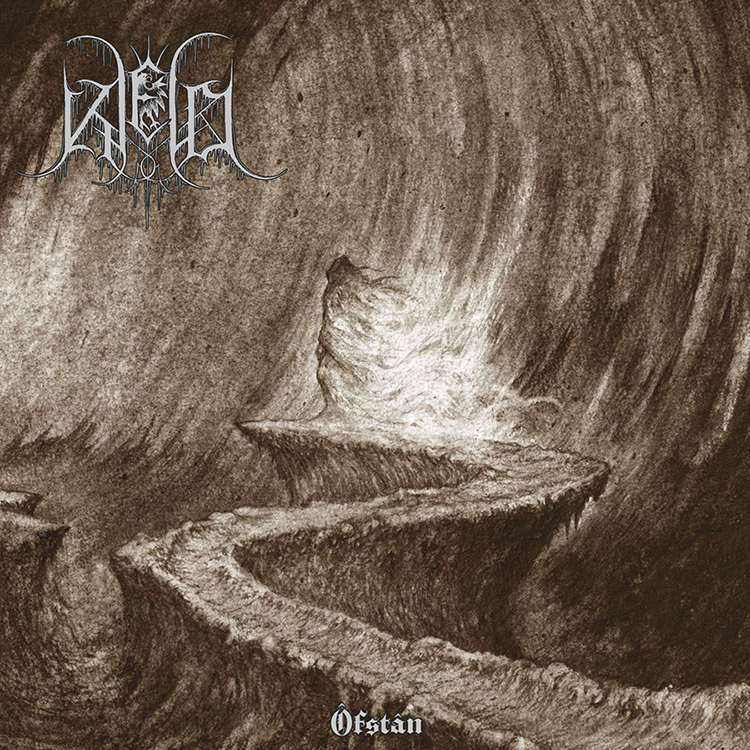 In their teaser song ‘Betsjoend’, a more theatrical and atmospheric sound can definitely be heard. The opener of the album, going by the use of – although rather minimal – keyboard (yes!) structures, already betrays the setting for the rest of the album.

Proving themselves true to their roots however, is very much audible on ‘De Iensume Widner’ (the lonesome Widower) with a blasting, devilish beat and riffing fast enough to outpace the Fenrir wolf. A bit more staccato is ‘Wylde Rixt‘, although still laced intertwining and dark guitar melodies.

Throughout ‘Ôfstân’ , the sound of Kjeld has evolved from being purely blasting and only slightly melodic to blasting, brutal with an over- and undertoning meandering melody. This does a lot of good things for the music in terms of  turning the album into a straight addictive piece. At second, third, fourth spin. At the hundredth spin, this is still no different.

The title track ‘Ôfstân’ (distance, translated/interpreted freely) is the magnum opus of the album, at least according to yours truly. A foreboding sense of finality emanates from this piece – the long road after which oblivion follows. Weaving guitar lines and stretched mid tempo sections are mixed with the normal(ish) blasting sections. The vocals sound a perhaps not subdued if more flattened – like the finality that flows forth.

‘Ôfstân’ could have well have been the album closer, but Kjeld choose to surprise with up tempo and even a remotely happy guitar sound of ‘Asbran’ (ash fire, glowing embers?). The surprise is likely to occur repeatedly, as the Frysians choose to take ancient Frysian myths, battles and stories into their album and put it to music.

This approach, although not innovative, does (as mentioned) wonders for the music – the album is immersive, mysterious and pleasantly melodic. The vocals by Skier are raw, harsh but pleasant to listen to. Perhaps a bit too rough for a ‘Frysian for Starters’ course, but surely suitable as ‘Refresher course’ with the lyrics at hand (which have been omitted in this promo, unfortunately).

Another favourite – although I might be a bit sensitive to the temptations of the melodic path – is ‘Falske Doop’. A slow build up with just two guitars, quickly escalating in the familiar thundering drums and layered riffing. Very well composed, including something that might be called a solo by true black metal standards.

The recording, although not hugely dynamic or lively, do what the music was intended and written for: deliver brutal, harsh, mysterious but most of all quality black metal into your ears during these predominantly weird and socially deprived times.

They took their sweet time since releasing Skym (2015, Hammer Heart Records) with this release. But Ôfstân is very well worth the wait if you are looking for both old fashioned (old Emperor alike) black metal, with an appreciation of local folklore and theatrics.

Kjeld themselves are a collection of very talented musicians, both in terms of songwriting as well as in playing (likewise live). The evolution and subtle changes with respect to their earlier material have been masterfully built onto this – already brilliant at the first song – LP.

As soon as able, this LP should be at mine and your doormat alike, if you value well played and well recorded black metal.