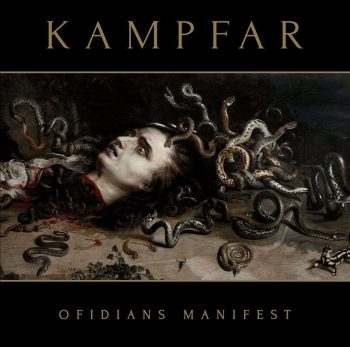 Two years ago, after their show on the Wolfszeit Festival 2017, Norwegian Black Metal band Kampfar pulled the plug; their Facebook and website went black and that was it.
Because of very personal reasons the band wasn’t able to continue the road they were walking on anymore and a lot of fans were left devastated that their favorite band had called it a day.

Yours truly was one of those fans. After being fortunate enough to join them on a tour for a small week, many many years ago, they are the band that first made me understand what Black Metal is all about. Speaking about clichés, most metal heads have that one band that’s special to them, well for me that has been Kampfar for many years.

You can imagine my excitement months ago when I heard they were working on a new album. After waiting patiently their first single ‘Ophidian’ was released in the beginning of March and I was not disappointed. It was obvious that their style has slightly changed but the band also stays true to themselves. Where with their previous albums Djevelmakt and Profan, the band went back to their roots, with Ofidians Manifest they are clearly moving forward.

The album to me is darker and more mysterious than before. Where mythology and ‘Ofidian’ seem to play a main role on the album, it indeed feels as if you’re sailing on a foggy, ominous river. Especially previous mentioned song Ophidian and Natt are among the darkest Kampfar songs there are.
Dark riffs are the bands signature anyway and interaction between guitar, deep bass, drums and vocals are fluent.

A guest appearance of Agnete Kjølsrud on Dominans gives a beautiful edge to this song, and makes it quite a unique piece for the band. The interaction between Dolk and Agnete works out really well and proofs that their step out of the box is working out well.
Dolk his use of voice on Ophidians Manifest overall is still very recognizable, but also slightly different. His clean singing is more out there, and has improved as well.

A second guest appearance is made by Marianne Maria Moen during the last song on the album Det Sorte. This songs ends the album beautifully. It’s a summary, yet also an ending of the past years the band has gone through. The emotions run through vocals and instruments. The adding of a piano and a violin give an extra dimension to it.

It’s safe to say that Kampfar is back in the picture, and they come back strong. If they continue staying true to themselves, more great things will happen for sure, but for now: go buy Ofidians Manifest. You won’t be disappointed.