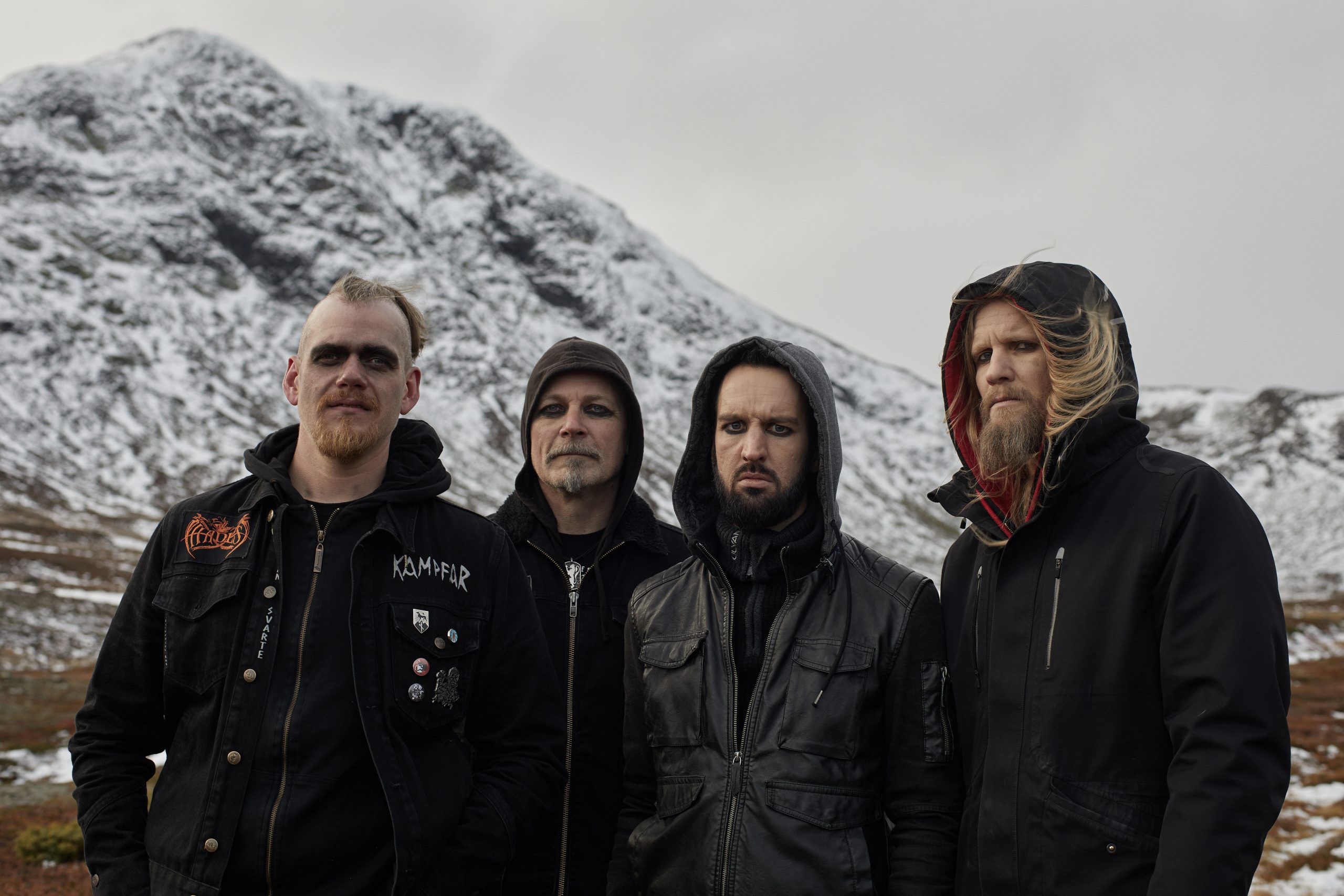 After two years of silence, Norwegian black metallers Kampfar return to the stage. Frontman Dolk sheds some light on the creation of ‘Ofidians Manifest’ and speaks about overcoming a dark period, battling slithering demons and reconnecting to people.

About two years ago, Kampfar took an indefinite break and now you are releasing a new album. How do you feel about this release?
“It is a very personal thing for me, for the whole band actually. It sounds like a cliché but everything on the album is personal. It is a very rough, deep and dark record, but maybe the one that was easiest to write because it was so close to me. It’s also a personal thing to get it out there too, it feels like a relief actually. ”

You mentioned that the record is pretty dark. Is that how you look back on the period without having the band or is it unrelated?
“The album, called ‘Ofidians Manifest’, literally means the manifest of the snake. The snake represents the snake that has been speaking to me in the last two years, trying to get me over to the dark side. The lyrics are very dark because of the mental wall I hit. We needed the rest. Back then, we didn’t know what was going to happen and if we would start making music again. So when we finally did, it felt natural to create music that was close to us and therefore very dark. It wasn’t necessarily related to Kampfar, more of a mental nutcase  thing.”

Who took the initiative to start things up again?
“That’s a good question. You know, when we decided that we had to stop with Kampfar, all of us saw it.  This was already way back in 2016. We said no to all offers and only played the festivals and tours we had agreed upon doing. When the last festival of 2017 came, it felt natural to say: ‘this is it’. There were no further plans. We also had to take a break from each other, I spent a year not speaking to anyone. All of the sudden, Ole (editorial note: Hartvigsen, guitarist) called me. He said: “I think I have something now”. He asked me if I was interested to hook up with him again. So we did and it felt good to go to the place in Hemsedal that has been very special for us. We met there and the rest is history. It felt like old family members meeting up again. Even though Ole took the first step, it could have been someone else. Kampfar is not a hobby but a part of our life, it was a bit like losing an arm or a leg without it.”

You referred to the place in Hemsedal that has been important for you and the band. Why is that?
“It’s very strange because we have discussed this several times in the band too. First of all, this is the place where Kampfar first started 25 years ago. It is a place that my family built when I was 6 years old and where I have lived for long periods of my life. It has always been a place for me to come back to. It has always been a very special place for me, but it must be for everyone. Over the last ten years we have been doing so much stuff up there and I have no explanation for it. Of course it is a very Norwegian habitat, a very Norwegian place to be. There is nothing else to do there.  You cannot go down to 7/11 to buy yourself a coffee. You have to stay there and when you get sick of each other, you have to hike in the mountains. Still in the end you’ll be back together and you have to create somethinge. It is a place where you have to create, otherwise you’ll get nowhere. It is almost like a sort of prison, but it is personally liberating prison. ”

So Ole created some demo’s for the songs. How did the process of songwriting go from there?
“Ole is the main force now, he is the musical genius of the four of us. He had some rough ideas and then we came together in the cabin in Hemsedal. We stayed there for maybe four or five days. We’d just continue with the idea and suddenly there was a bigger concept that grows into a song. We have been up in Hemsedal maybe ten times, for four or five days in a row, creating and creating. All of the sudden we had a record.”

I’ve followed Kampfar over the years and listening to ‘Ofidians Manifest’, I was a bit surprised to be honest. I hear the Kampfar sound, definitely, but I also hear other musical approaches and different vocal styles. Is this something you recognize?
“I recognize that, yes. It has been a natural development over the years for me as well. It’s like what I said earlier: this album has been rough, it has been very hard to write lyrics for it. On the other hand, it was also very natural. It felt like returning the my essence when composing the songs and the same goes for the vocal styles, or actually more like vibes. Instead of thinking about creating vocal styles, I aimed to create vibes and used the voice more as an instrument. That is maybe the difference between Kampfar now and back then.”

You often read in other interviews that metal musicians are not really following their own scene anymore or that they find influences outside of it. Was that the same for you?
“Not really to be honest. Maybe it was like that in the earlier days. I have been doing this for so many years and right now, I think I get more inspired by people in general. The people I meet, the people I am surrounded with. Maybe these people inspire me even more to practice these kind of vibes again. They put me in this kind of musical way of expressing myself.  After all these years, I’m 45 now, I’m still so fascinated and I meet people that still amaze me. There are so many things that are completely new in a way. That inspires me so much when it comes to creating music and vibes too. I have no other explanation for it. It’s also been one of those things that have helped me through the past two / three years, because mentally I’ve been in a bad state of mind.”

Do you have an example of such an encounter, a song on the new record perhaps?
“I have a very good example actually. The album features the song ‘Dominans’ with guest vocalist Agnete Kjølsrud (Animal Alpha, Djerv) and that is one of moments. I met her a few years ago and she was very open about her struggles in life. The same happened to me and suddenly we were there. It seemed very logical to perform this song together because it’s the battle between the voice of the snake and my voice, and the snake tries to dominate me. It made a lot of sense to work with her, both of us have been fighting a lot of battles. Not just because she is a good singer, or not because she has worked with Dimmu Borgir (‘Gateways’). ”

Did you already have her contribution in mind when you wrote the song?
“That’s even the best part of it, we didn’t do that. The instrumentals of the song were sort of written, but we didn’t know where to go. Somehow it became very clear to me  that I had to do this track with Agnete. Everything fell into place: the lyrics and the battle fitted right into the music.”

Looking at the cover artwork featuring a Medusa and seeing the video for ‘Ophidian’ with a river and a ferryman crossing (Charon and the styx), I was wondering if there is some underlying (Greek) mythology present?
“Yes, there is. If you take this album: It is more like a book. When you listen to the first song, you open the book and at the end you close it. That is how we see the record. When you start with the album, you stay focused and try to connect to life and at the end you have no other option then to let it go. It is the end of life and the end of the album. The video, and the track ‘Ophidian’ finds itself in the middle. Lyrically and visually it is the closest representation of the book, so to speak. The video, with the ferryman, can be seen as the end of life and the snake devil is the snake tongue that has been talking to me. It is the most closely to connected to everything that is happening on Ofidians Manifest.”

Kampfar has always been an excellent live band, and you have played a lot of gigs over the years. I can imagine that is also tiresome. Was this a factor that contributed to the band breaking up?
“For sure. The essence disappeared somehow. We could play a big festival show with 20.000 people waiting for us and we realized that it didn’t mean what it should anymore. It felt like going to work. Luckily we are four individuals that saw this coming, very early on. Many things came together: me and Ask mentally hitting a wall, Ole needing a break. We saw that we became a machinery and it shouldn’t be like that. We did not start Kampfar to become rock stars, but because we want to feel it. I went on stage thinking about how I should be with my daughter, instead of doing this. That seemed wrong to all of us. It is also the reason why we are so clear on what we do now. Now we’ve returned and we receive three or four offers on a weekly base. We have to stay focused and we’re only playing five or six festivals. We don’t want to fall into the same trap again. 2019 is a bit of a warming up and in 2020, or late 2019, we will see if we are ready to step on the gas.”

‘Ofidians Manifest’ will be released on May3rd, 2019, via Indie Recordings.  Follow Kampfar here.